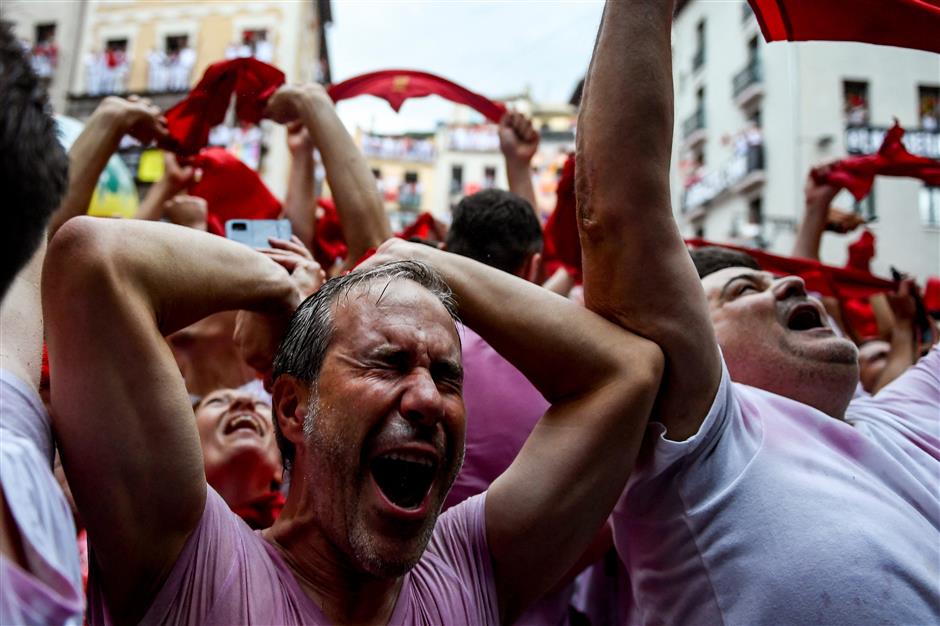 A participant cries during the "Chupinazo" (start rocket) opening ceremony to mark the kick-off of the San Fermin Festival outside the Town Hall of Pamplona in northern Spain on Wednesday.

A red-and-white sea of revellers erupted in celebration Wednesday, dousing each other with wine in a packed Pamplona square as Spain's most famous bull-running festival returned after a two-year absence due to the pandemic.

The launch of a firecracker known as the "chupinazo" from the balcony of the northern city's town hall at noon marked the official start of the nine-day San Fermin fiesta, kicking off the bedlam.

Thousands of party-goers from around the world -- most dressed in the traditional all-white outfit with a red scarf -- responded ecstatically, screaming "Viva San Fermin!" and spraying each other with wine.

Despite a light rain falling, the throng cheered wildly as they waved their red scarves in the air and passed giant yellow inflatable balls over their heads as scores looked on from crowded apartment balconies.

The annual festival, made famous by Ernest Hemingway's 1926 novel "The Sun Also Rises", was last held in 2019.

Local officials called off the hugely popular event in 2020 and the following year because of the Covid-19 pandemic -- the first time the festival was cancelled since Spain's civil war in the 1930s.

But the highlight is the bracing daily test of courage against a thundering pack of half-tonne, sharp-horned bulls.

Every day at 8am, hundreds of daredevils race with six fighting bulls along an 850-metre course from a holding pen to Pamplona's bull ring, which this year marks its 100th anniversary.

The bravest -- or most foolhardy -- run as close as possible to the bulls' horns, preferably without being gored.

The first bull run, which traditionally draws the largest number of participants, is on Thursday.

Dozens of people are hurt every year, although most injuries are caused by runners falling or being trampled by the bulls.

The last death was in 2009 when a bull gored a 27-year-old Spaniard in the neck, heart and lungs.