Turkish President Recep Tayyip Erdogan warned Sweden on Monday that it should not expect his backing to join NATO following the burning of the Koran outside Ankara's embassy in Stockholm.

Erdogan's furious comments further distanced the prospects of Sweden and Finland joining the Western defence alliance before Turkey's presidential and parliamentary polls in May.

Turkey and Hungary are the only NATO members not to have ratified the Nordic neighbours' historic decision to break their tradition of military non-alignment in response to Russia's invasion of Ukraine.

Hungarian Prime Minister Viktor Orban has promised that his parliament would approve the two bids next month.

But Erdogan has dug in his heels heading into a close election in which he is trying to energise his nationalist electoral base.

"Sweden should not expect support from us for NATO," Erdogan said in his first official response to the act by an anti-Islam politician during a protest on Saturday that was approved by the Swedish police despite Turkey's objections.

"It is clear that those who caused such a disgrace in front of our country's embassy can no longer expect any benevolence from us regarding their application for NATO membership," Erdogan said. 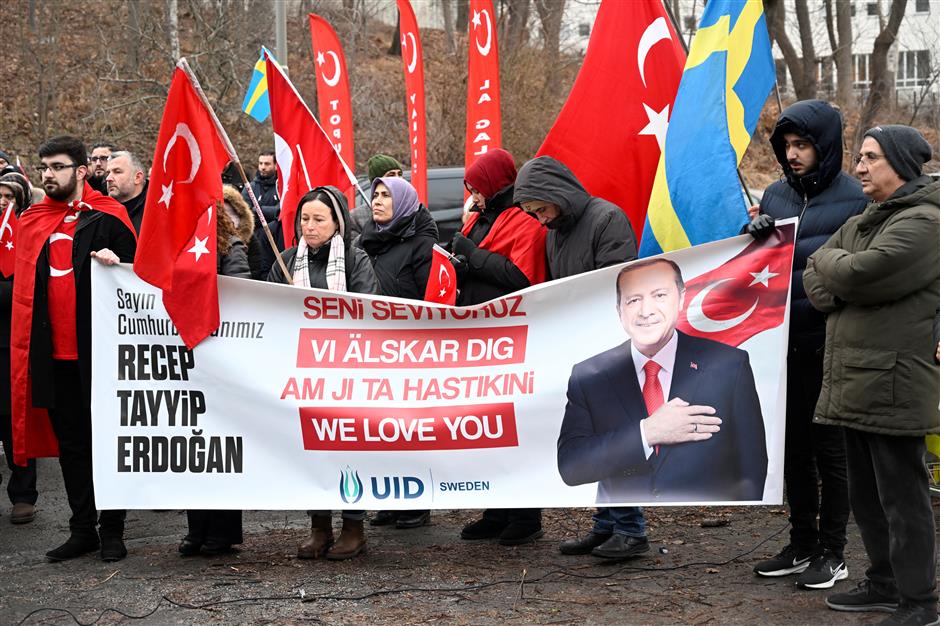 Members of the pro-Turkish organization Union of European Turkish Democrats (UETD) demonstrate in support of Turkey and President Recep Tayyip Erdogan outside the Turkish embassy in Stockholm, Sweden January 21.

"I want to express my sympathy for all Muslims who are offended by what has happened in Stockholm today," Prime Minister Ulf Kristersson tweeted on Saturday.

Erdogan has already set out a series of tough conditions that include a demand for Sweden to extradite dozens of mostly Kurdish suspects that Ankara either accuses of "terrorism" or of involvement in a failed 2016 coup.

Sweden's courtship of Turkey appeared to be making headway with a flurry of visits by top ministers to Ankara.

Stockholm has also enacted a constitutional amendment that will make it possible to pass tougher anti-terror laws demanded by Ankara.

But things turned sour when a small Kurdish group hung an effigy of Erdogan outside Stockholm's city hall earlier this month.

Turkey summoned the Swedish ambassador and revoked an invitation for its parliament speaker to visit Ankara.

Turkey summoned Stockholm's ambassador for another dressing down and canceled a planned visit by Sweden's defence minister.

Erdogan said the burning of the Muslim holy book was a hate crime that could not be defended by free speech.

"No one has the right to humiliate the saints," he said in nationally televised remarks.

"When we say something, we say it honestly, and when someone dishonours us, we put them in their place."

In an interview with the German titled Die Welt, he said that "freedom of expression, freedom of opinion is a precious commodity, in Sweden and in all other NATO countries. And that is why these inappropriate acts are not automatically illegal."

Stoltenberg, who last spring was talking of a fast-track membership process of just a few weeks, added in the interview that the Swedish government had condemned the demonstration "in very clear terms".