I am woman, hear me roar; don't ignore me any more

Billionaire businessman Yu Minhong has publicly apologized for comments widely seen as denigrating women, saying they look for money before personal qualities when looking for a mate.

As a Chinese woman, I felt offended by what he said about women in China. “Chinese women pick men based on their ability to make money and they don’t care if they are good people,” Yu told a recent forum. “Chinese women’s depravity has led to the nation’s depravity.”

Money is important because many don’t dream of sharing the last bread with the loved one on a romantic trip in Gobi desert. Money is not that important because we can only use this much. Yu later apologized on Weibo saying he actually meant the quality of women decides the level of the country, and later made an apology via the Women’s Federation.

As a Chinese woman, I felt offended by first two statements but not surprised. It has happened many times, that men, and sometimes women too, don’t understand where they have got it wrong even when they make apologies.

Yu was trying to say that Chinese women’s standards for a mate is that he makes a lot of money. That has led Chinese men to make money, which has led to the country’s degeneration. I think Yu refers to some materialistic girls who take money as the only criteria, and only marry rich. Men might think all girls are like this and strive to make money while ignoring more important qualities like loyalty, honesty and many others. I wish I was that influential on my boyfriend, and he will just listen. I also wish Yu had explained what he meant about the country’s degeneration. Does he mean moral decay in the sense that many people — men and women — are becoming more materialistic?

That’s a small amount of women. My suggestion is that you find others. Does he mean that making money equals moral degeneration? Great. Should I quit my job and stay at home?

His first apology is the same idea in prettier words, explaining that a well-educated mother cultivates better children. Thank you for acknowledging moms’ contribution, but where is dad? I was brought up mostly by my mom, like many Chinese of my age. But my dad tried all. He could teach me right from wrong whenever he could. Most of my girlfriends ask their husbands to share the duty.

And it’s so often when guy friends say “I have to miss the gathering because I need to be home tutoring my kid.”

It’s not only Yu, but also many more who still consider women’s sole task is to bring up children. Many influential men like Yu have made statements that uproared both men and women. 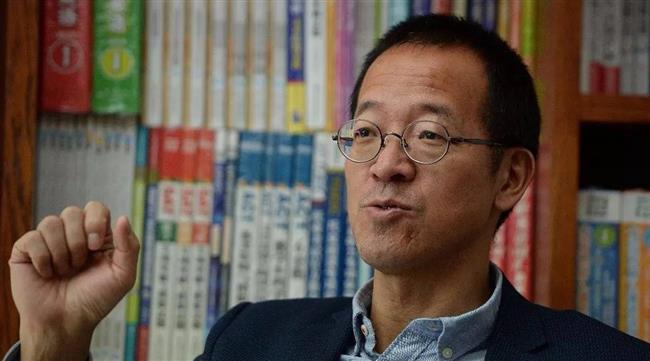 I have many intelligent girlfriends who strive to find a balance between work and family, and equally smart friends who choose to stay at home.

I respect both groups. I also respect those guy friends who decided to take less-demanding jobs or even to quit so that they could share the task for their children's education.

People like Yu have been saying this kind of things for years, thinking they are humorous rather than offensive. Yu said of the booming shared economy in China that why not share girls? He also said of Chinese women before that once they get married, they don’t improve themselves, but instead, they make or break their husbands.

In his autobiography, he paid tribute to his wife, who encouraged him to study abroad, or would ban him from home. His wife said if he couldn’t get into a college in the US she would not let him into the apartment.

He was never under so much criticism as this time. This time for the women degeneration remark he received thousands of critical comments in a few hours. He is not the only one.

I can’t remember how many times I have heard similar jokes when people just laughed and even those who felt offended turned on a poker face without pointing it out. I was often blamed to be ruining the mood if I pointed it out.

An acquaintance of mine, a 45-year-old key opinion leader on WeChat in the financial industry has always been the spotlight at gatherings.

His jokes about marriage and women were popular like Yu’s. One of his favorite jokes is that he will never hire a young woman who wears peach-pink lipstick, because that means she is likely to be a mistress, which will upset his wife.

Many fashion sites and magazines call that color zhan nan se, or the color that strikes all men. No wonder he has got such impression. I was so often confused when reading promotional articles for lipsticks, when the color is described to be the bitchiest and must for a date. I guess I’m too outdated to understand bitchiest as a desirable quality for a lipstick.

When he told this joke recently though, half of the women at the dinner confronted him, which got him puzzled and he asked me: “Minji, I have been saying this all the time, haven’t I?”

But we are different. And there are and will be more of us.