Taking the road to urbanization, stop to appreciate the forests 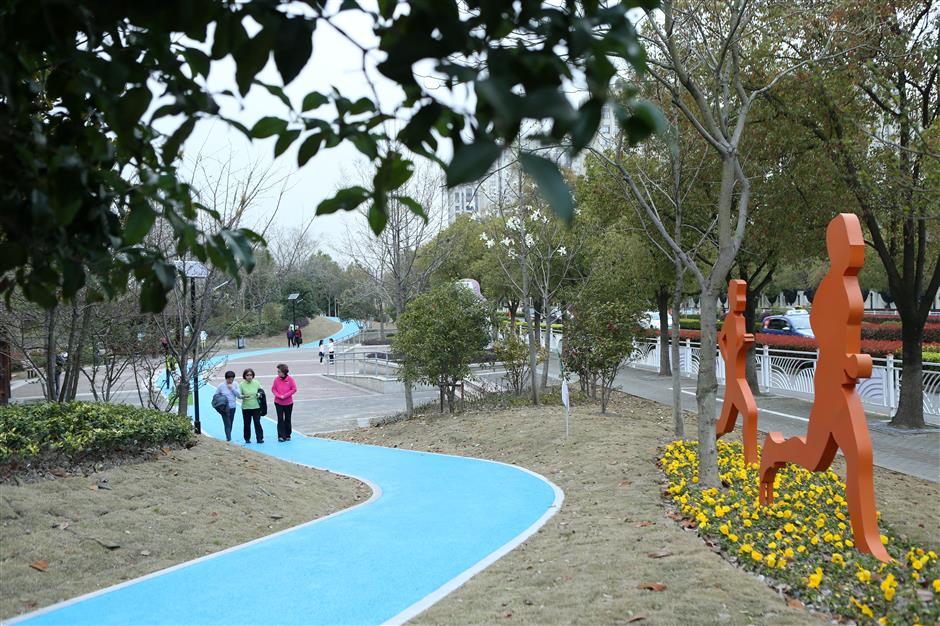 People walk along a jogging path in Minhang District, Shanghai, on March 20, 2019.

It is shinrin yoku in Japanese, salim yok in Korean, and senlin yu in Chinese. “Forest bathing,” despite its many names in different cultures, has long been a soothing source for tired souls. In Finnish, it’s called metsänpeitto — “covered by the forest.”

Florence Williams, author of “The Nature Fix: Why Nature Makes Us Happier, Healthier, and More Creative,” compares Japan, South Korea and Finland in a way that prompts one to rethink what amounts to a meaningful urban life.

According to her findings, Japan and South Korea are trying to help their people de-stress by creating more wooded space, as both countries have a high suicide rate. The two economic powerhouses have grown exponentially along the road of industrialization and urbanization, among other things.

In contrast, Finland, which didn’t urbanize until the 1970s, has maintained a strong link to the land — trees still cover more than 70 percent of the country.

“Finland scores high on global scales of happiness,” says the author, adding that everyone has access to what makes them happy — lakes, forests and coasts.

Turning to South Korea, she observes: “The goal of the current (South Korean) National Forest Plan is ‘to realize a green welfare state, where the entire nation enjoys wellbeing.’”

That South Korea and Japan are catching up in terms of afforestation attests to mankind’s renewed interest in the human-nature bond, which faded into oblivion in once rashly urbanized parts of the global village as people supported growth models that sacrificed wooded spaces.

Fortunately, the country is changing for the better before it’s too late.

In 2005, Xi Jinping said metaphorically that green mountains were no less valuable than mountains of gold and silver.

In 2013, some national legislators proposed writing “eco-civilization” into the Constitution. In 2018, the Constitution was duly amended in a landmark move to anchor national development on a sustainable path.

According to the National Forestry and Grassland Administration, forests are expected to cover 26 percent of the country by 2035. Now it’s abbout 22 percent.

A recent NASA report shows that China contributed the most — about a quarter — of the world’s new green areas from 2,000 to 2017. In Shanghai, there’s a vivid saying among the people: Per capita green space has grown from the size of a pair of shoes to that of a room.

As Williams notes, the idea that nature nurtures you and me isn’t new. Our ancestors lived with it. The Romantic Movement embraced it, as praised by poets and philosophers, East or West.

It was not that our forefathers felt uneasy with material progress, but that they realized that a sense of connectedness between man and nature would provide the ultimate comfort for homo sapiens.

It was in nature that people would find themselves rooted in the grand scheme of things and touched by a bigger force than a daily life often defined or derailed by pecuniary pursuits. In her book, Williams also tells of her personal struggle to find health and harmony in the urban world.

You don’t have to read her book to understand why nature heals, but her research may have some surprises for the uninitiated reader.

For example, she cites Swedish scientists as saying that more than half of the genes humans once had for smelling have been neutralized as modern living takes a toll on our sense of smell.

Stressed-out office dwellers, she finds, often overlook the information that smells, sounds and sights offer — to the detriment of their physical and mental performance.

In a world increasingly dependent on artificial intelligence, people seem to be more and more oblivious to the simple fact that nasal receptors link directly to the brain, crossing the blood-brain barrier, she warns.

The book drives home the point that public and government support is indispensable to ensuring a better life “covered by the forest.”

In my high-rise office in downtown Shanghai, I open the window often to the din of city traffic. But that’s not the whole story of my life in this metropolis for which I have come to develop a “biophilia” over the past couple of years, when green space spread steadily. (In 1973, social psychologist Erich Fromm created the word “biophilia” to mean “the passionate love of life” and the yearning for “further growth, whether in a person, a plant, an idea or a social group.”)

A short walk from the office takes me to a tree-lined street park.

And when I go home to the suburbs, it’s reminiscent of my campus life in California nearly 20 years ago — I was immersed in the sweetness of birdsong, creeks, trees and flowers.

A pocket park of about 100 mu (6.66 hectares) just opened about five minutes’ walk from my home. There, I see frogs flopping, dogs lolling and butterflies fluttering. It reminds me of a book written by Duane Elgin in 2009.

In “The Living Universe” he says: “Connecting with the aliveness (of nature) has been a passionate interest since growing up on an Idaho farm in the 1940s and 1950s ... I recall lying down in a field of lettuce, nearly covered by its abundant leaves, and absorbing the humming aliveness of the earth, the fields, and the sky above me.”

In Qingpu District, where I live, the local government is throwing its weight behind the creation of a 21-kilometer waterfront park system.

And by the end of last year, Shanghai had built about 600 kilometers of green ways where cyclists, pedestrians and runners could enjoy a shaded journey. The city will complete 2,000 kilometers of such shaded paths by 2035.

As Shanghai strives to be ever more beautiful, it could be real fun to translate some of Williams’s tips to action:

Daily — Take a break in a natural setting with trees, birds and flowing water.

Weekly — Escape from the humdrum, spend at least an hour in a park with wooded paths.

Monthly — Get away to a quiet forest, river, lake or seashore.

Yearly — Vacation in a remote setting to experience the awe that nature freely provides.

You feel at ease only when you feel small. Duane Elgin’s line resonates: “Growing up in the big sky country of Idaho, I felt myself a small creature against a vast landscape.”