When city and countryside live in harmony, village life prospers and all breathe easier

What does a city truly crave? Better villages on its doorstep.

So answered Tengtou Village, host of the only pavilion with a rural theme at the World Expo in Shanghai in 2010.

As Chen Xiwen observes in his book, “China’s Agriculture, Rural Areas and Farmers,” few took Tengtou’s answer seriously at the time. The catchphrase then was “Better City, Better Life,” and, best known for its scenic charm and natural beauty, Tengtou, in east China’s Zhejiang Province, seemed way out of step with the trend of the times. Today, attitudes are quite different.

China’s cities are often vastly greater than the urban sprawl at their heart. The hinterland of Shanghai forms about 85 percent of the city’s land area.

How to make best use of this “rare resource” concerns not just those who live there, but city dwellers gasping for a convenient breath of cleaner air.

“Convenient” means one should not have to travel outside the city limits to be refreshed by the humming aliveness of the earth beneath your feet or the trees overhead.

Until recently, I had to escape Shanghai for my rustic refreshment. The city’s rural attractions had somehow withered in the shadow of the neighboring urban giant. To my mind, rural Shanghai could not compare to rural Hangzhou in Zhejiang Province, to give just one example.

But over the past year, I’ve been to dozens of villages in western Shanghai, especially in Qingpu District, and found them more livable with cleaner air and rivers, but still facing common challenges.

How to attract back the thousands who fled in search of economic advantages? How to revive communities with lives that are both sustainable and economically desirable? How to create something new without destroying what is old?

Visit a village and chances are that you will see few people except elderly men and women, mostly sitting desultorily around in front of their old houses. The village has been “hollowed out.” Their children have left, unsurprisingly. People often move for better jobs and more dynamic communities.

Only when it becomes a better place to be can a village regain its bygone glories, or carve out new ones as a home, as a retreat for the self-sufficient, or even as a haven for artists, artisans or writers and all those whose work requires a tranquility that cannot be easily found in an environment of steel and glass.

This is where Zhang Ruijie and Chen Junfang come in, a husband and wife who may well foreshadow a new generation of villagers who choose to tackle the problem of hollowing-out head-on.

Dr Zhang was educated in medical science in Shanghai and Tokyo. He used to work for the WHO, thanks in part to his knowledge of traditional Chinese medicine that advocates harmony between man and nature. His wife Chen Junfang is a native of Nima Village in Qingpu District. At their home in the village, they chatted with reporters.

“You’ve got to have people coming in first,” said Zhang. “Only when people are willing to come to visit or even stay can rural life be revitalized.”

He and his wife Chen have turned the ground floor of their house into what has become known as the most beautiful rural book club in Shanghai. Surrounded as it is by a vast stretch of rice paddy and decorated with flowers and paintings by Chen and her mother, aside from offering a place for locals to meet, the book club — A Literary World of Mint Fragrance — attracts many expats and artists from Shanghai who wish to relax or work out in a bucolic environment. 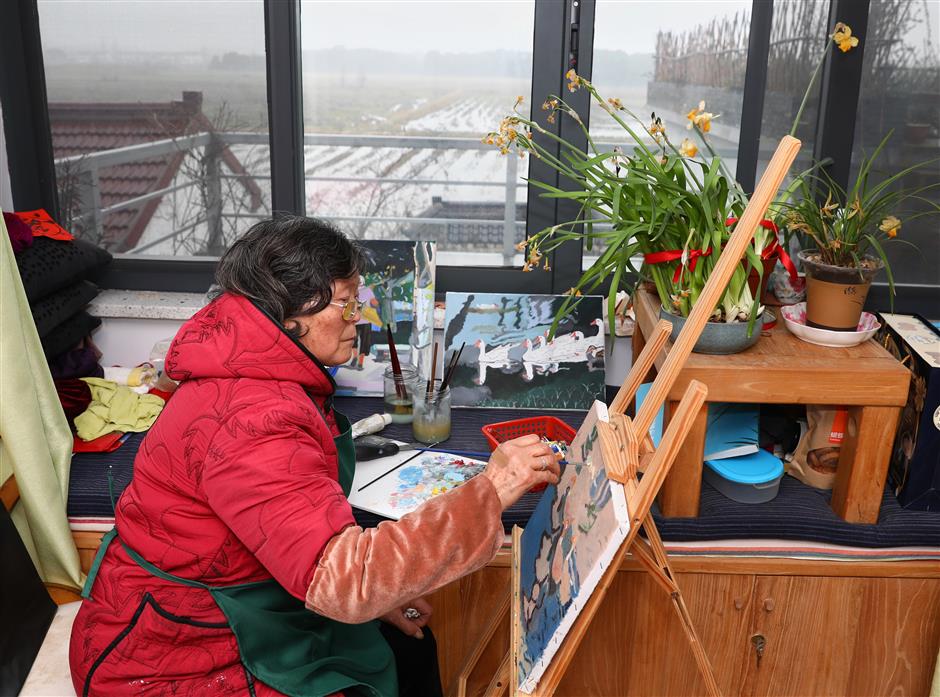 Many of the village’s houses are vacant. Zhang and Chen invited artists to rent these houses either as temporary homes or as studios.

“It benefits both the newcomers and locals,” Zhang said. “The newcomers like the pastoral ambience, and in their spare time, they offer ad hoc entertainment for the local people.”

It is not just an ordinary rental relationship, in which the owner of a house and the renter do not “interfere” with each other once the contract is signed. The newcomers, including cross-talk masters, a sculptor and a filmmaker, all entrust their homes to the care of the owners, including Zhang and Chen.

We entered cross-talk master Zhao Songtao’s rented home for an uninvited visit while he was away, as his door was open. It reminded me of writer Feng Zikai’s observation of the difference between an urban and a rural home — one locked, the other unlocked against strange faces.

We played with Zhao’s seven pet cats, each one mild and polite to this strange group of visitors. A mind unguarded against strangers might have affected the character of small animals as well.

Creating a free book club and inviting city people to come and stay is just one step in the couple’s plan to snatch the village from the jaws of oblivion.

Zhang is creating a garden of traditional Chinese medical herbs. He and his wife have contracted about 30 hectares of arable land in the village to grow organic rice. Part of it will be dedicated to realizing Zhang’s lifetime dream of having a garden where people can learn and feel for themselves the benefits of traditional Chinese medicine, especially what it has to offer to soothe the stressed modern life. 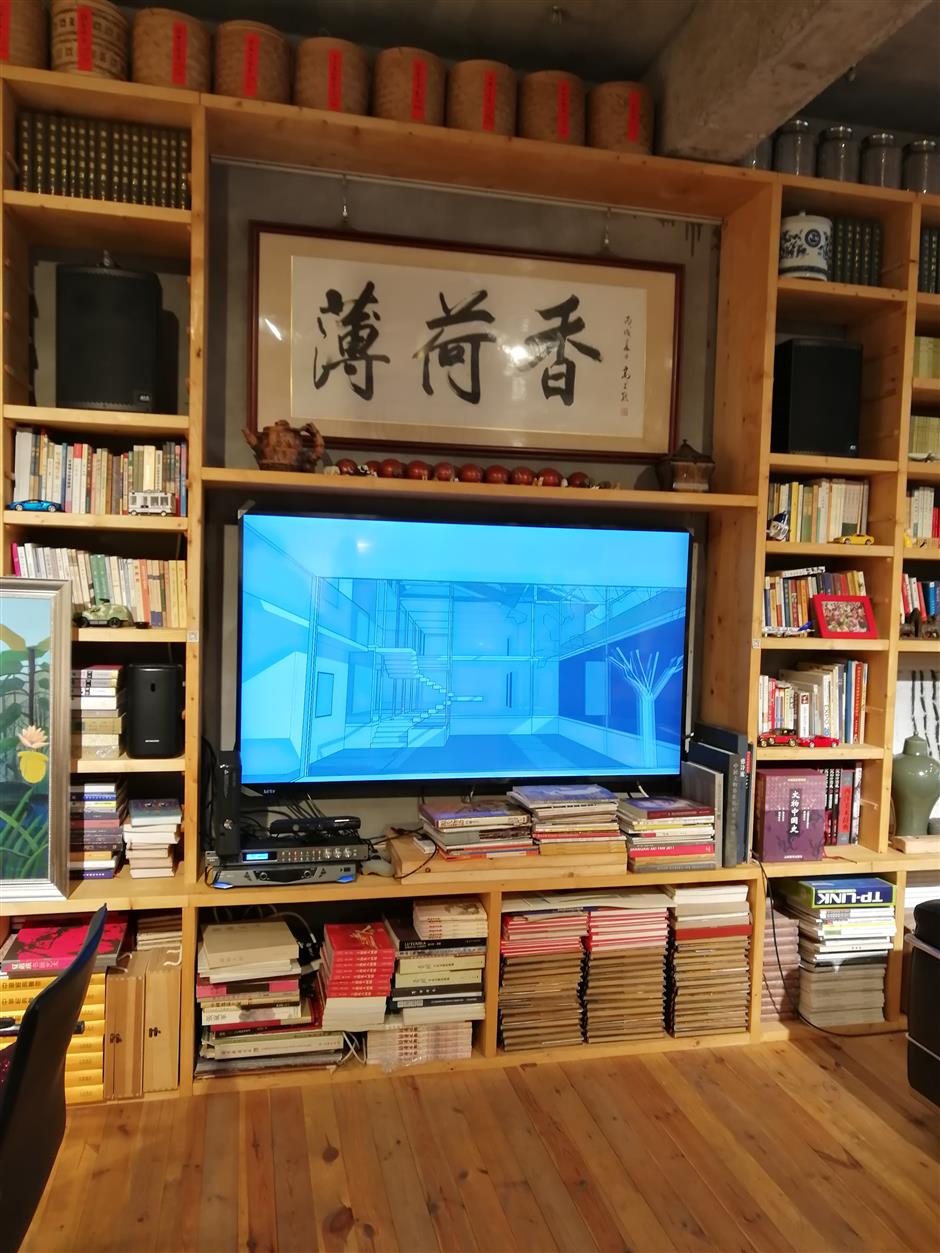 Zhang and Chen’s house has become known as the most beautiful rural book club in Shanghai.

The first phase will be ready in May. “More than 200 traditional medical herbs will be planted by then,” said Chen.

“About 80 percent of major medical herbs can be found in the Jiangnan region,” explained Zhang. Jiangnan literally refers to the region to the south of the Yangtze River. “We have no difficulty in transplanting them to our garden.”

“I always dreamed of spreading a healthy way of life according to the values of traditional Chinese medicine,” Zhang told me. “In traditional wisdom, there are three levels of health care, the last resort being seeing a doctor. The first and best is a balanced lifestyle, and next comes zhi wei bing, treating illness while one is not ill yet, known today as preventative medicine.”

But what makes a balanced lifestyle? Zhang drew my attention to three sources of “nutrition” that are conducive to a balanced way of life: food, breath and sleep. For too long many of us have sacrificed our breath in our concrete world of pollution and emissions, assuming that food and sleep are all that sustain us. Trees give us life, and yet we chop them down and put up concrete buildings in their stead.

A rare herb garden then, flourishing just over the horizon? Not just a source of fresh air, it will be a symbol of a healthy way of life.

All these efforts combined cannot immediately attract back all those who left. Today’s villages are no longer what they used to be, when several generations of one family worked full-time on the land. As younger farmers found better jobs in towns and cities, large-scale farming by the few remaining farmers became possible with the help of technology.

Zhang and Chen’s chief business is actually producing high-quality rice that will sell at a premium.

“We recruit our neighbors in the busy planting and harvest seasons,” Chen said. “We pay them well, and we sell not only our own rice through the cooperative, but also that grown by other villagers who otherwise may find it difficult.”

When free from back-breaking farm work, Zhang and Chen think hard about ways to diversify their rural enterprise.

It should not be too difficult for them to convince their urban neighbors that what they really do crave are better villages on their doorstep.