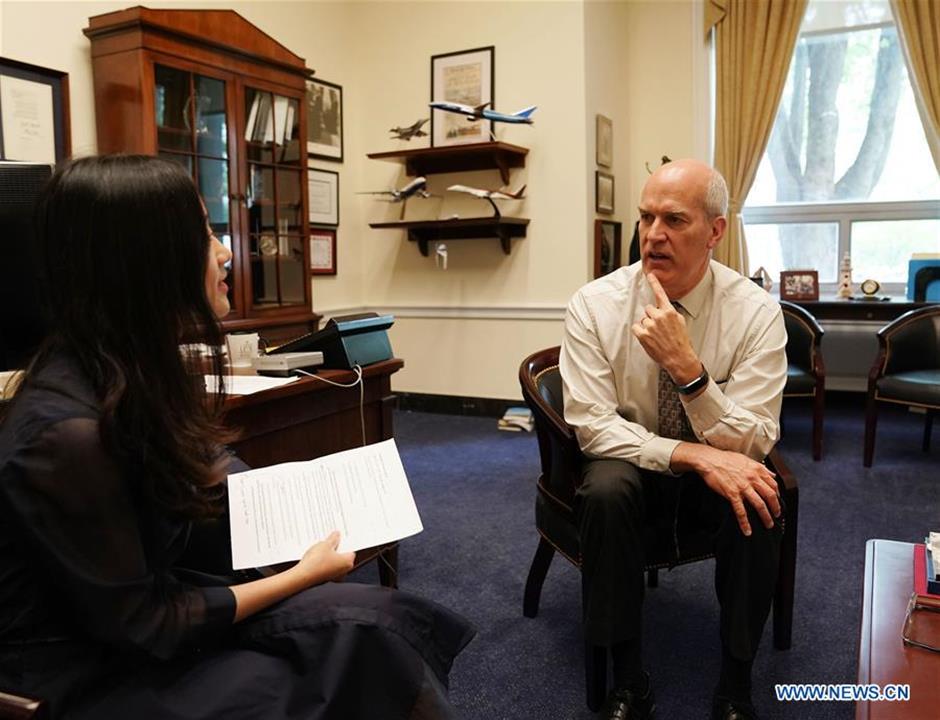 US Congressman Rick Larsen, co-chair of the bipartisan US-China Working Group in the House, speaks during an interview with Xinhua at his office in Washington DC, the United States, May 9, 2019.

The latest US tariff hike on Chinese goods will hurt American workers and consumers, and have a negative impact on the US economy, congressman Rick Larsen, co-chair of the bipartisan US-China Working Group in the House, has said.

Increasing additional tariffs on 200 billion US dollars worth of Chinese goods from 10 percent to 25 percent will push up the price of consumer goods, said the Democratic congressman. "It's going to start hitting many more people than the tariffs are currently hitting."

In a report released Saturday, Goldman Sachs revised up its estimate of the tariffs' impact on core personal consumption expenditures to 0.2 percentage points. If the United States imposes tariffs on the roughly 300 billion dollars remaining in Chinese imports, the report said, the effect would rise to 0.5 percentage point.

"It'll be bad for the economy. It will be bad for the president and won't advance the necessary discussions," said Larsen, who represents the Second Congressional District in northwestern Washington state.

Noting that the United States and China need to revolve their differences regarding the transfer of technology and intellectual property rights protection, Larsen said he does not believe tariffs are the right approach to address these problems.

The added tariffs and the retaliatory tariffs have not been good for the Chinese economy or the US economy, Larsen said, adding that he hopes the two sides can "back away from the tariffs" and find another solution.

Larsen created the US-China Working Group, which seeks to strengthen diplomatic relations with China and educate members of Congress through meetings and briefings with business, academic and political leaders from both sides.

In late March, Larsen led a bipartisan Congressional delegation to China, traveling to Beijing, Hangzhou and Hong Kong to engage with high-level Chinese and US officials, as well as American businesses operating in China. The six-member delegation also toured Alibaba headquarters.

"As a representative from Washington state, I am particularly concerned with the current trade discussions because the largest number of exports from the state go to China," Larsen said in a statement released upon returning from the trip.

"Forty percent of jobs in the state depend on trade. In Snohomish County, where I was born and raised, 60 percent of all jobs are tied to trade," he said.

According to a recent report from the US-China Business Council, Washington State's goods exports to China in 2018 totaled 12.1 billion dollars, down by 12.4 percent from 2017, due to headwinds from the US-China trade dispute.

Despite the ongoing frictions in US-China relations, Larsen said he expects trade between his state and China and between the two countries overall to continue.

"Unfortunately it will be more expensive because of these tariffs, and the people I represent will be paying more because they'd be paying higher tariffs," he said.

The congressman said that he anticipates the current administration will continue to take a tougher stance on China, but will "not get the result that they want."

"We're stuck with each other in one way," he said. "And so it's best that we find a way to cooperate where we can, and compete where we will."