Are foreigners given an easy ride in China? Maybe it's time to reflect ...

An angry Egyptian man was captured on video yelling at and violently shoving a police officer in Fuzhou City, Fujian Province, last week. I was anticipating news that he would be deported for such thuggish behavior and was disappointed when I heard he was merely made to write an apology letter. I wasn’t the only one feeling miffed.

Several situations have become hot topics in China recently because they appear to support the idea that foreigners here are given special privileges.

The first case was when footage went viral of a man surnamed Younes, an Egyptian national studying at the international college of Fujian Agriculture and Forestry University, aggressively shoving and chasing a police officer who had stopped him for illegally carrying a passenger on his scooter.

The public anticipated news of strict punishment for attacking a police officer, ultimately leading to the deportation of the man. But then local police released a statement that enraged many: The man had simply been made to write an apology note.

Police claimed the punishment was lenient because the man was a student, but that led to more criticism from the public. “If he were a Chinese student, would the punishment be the same?” one netizen asked. A fair question.

Video of the Egyptian national getting aggressive with police in Fuzhou City recently.

Younes said he acted that way because “I am a foreigner — I don’t understand Chinese law.” What a cop-out! Is he basically saying that back home in Egypt it’s perfectly okay to physically push and shove police officers?

The man, in my opinion, should have been deported, which is an option open to police if they deem the situation “serious” enough. I think most people would agree that it was pretty serious.

Perhaps fueled by anger around Younes’ lenient treatment after assaulting a police officer, news of a Chinese man being fined on Nanjing’s Metro for drinking milk tea went viral. Why? Because sitting opposite him was a female foreigner eating bread — she received no such punishment.

I can see how this could irk locals, especially since it occurred on the Metro system, where some of the rudest behavior visible is often perpetrated by oblivious foreigners.

On a recent Metro ride home, I spotted something weird that I’ve never seen before. Someone had got on the train, pulling a bicycle with them. Of course, bicycles are not allowed on the Metro, for obvious reasons, so I was a bit baffled and took a closer look. Lo and behold it was a small group of foreigners.

If they’re just here on holiday then I can forgive them — maybe they just somehow didn’t realize bikes are not allowed, especially because they’re allowed in many other countries. But that can’t be the case, since you’re not going to buy a bicycle if you’re just here on holiday. Did they not look around and realize, at least on their second Metro ride, that not a single other soul brings bikes into the station, let alone on the trains? And why did the security personnel at the entrance of every station let them by? 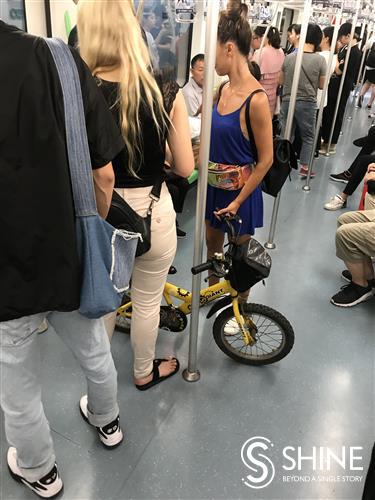 Some foreigners get on a Metro train in Shanghai, pulling a bike with them.

I’m embarrassed to admit that I have been the recipient of police favor a couple of times. The first time was when riding a bicycle in a restricted area while I was living in Tianjin. The police stopped a group of cyclists in one go, including me. All the other riders, who were locals, were fined, while I was just given a warning in broken English. “Here, no. Okay?”

Another time was in Shanghai when I rode my scooter, again with a group of other riders, into a no-bike street. The policeman made me wait until he had taken everyone else’s IDs, issued tickets and let them all go on their merry ways before telling me, this time in Mandarin, that I wasn’t allowed to ride a scooter on that road.

It’s hard to tell for sure if officials being lenient on foreigners is a widespread occurrence, or just something people pay more attention to when it does happen. There have also been plenty of times I’ve been fined or told off, together with locals, and received no favor whatsoever.

But that might just be because I’m able to speak Mandarin with officers, which probably makes things a lot easier. I assume that, rather than purposefully wanting to “go lightly” with foreigners, most police just fear communication difficulties and aren’t equipped to deal with any language barriers.

As foreigners, it’s probably a good idea to try and be polite, at least to local standards. It helps to remember the adage: When in Rome, do as the Romans do. It’s a famous idiom in China (ru xiang sui su), too, and works for many occasions. Just look around you. If you don’t see others carrying bikes in a certain place, or eating and drinking in a certain place, don’t do it. But please, for the love of cleanliness, don’t spit just because some locals do!