The soul of new civilized cities: staying abreast of the times in cultivating spiritual civilization

I am very happy to be invited to the Future Consensus Forum on Next Civilized City and Sustainable Development.

Building the “next civilized city” is the ultimate goal shared by China, Asia, and the rest of the world in their pursuit of social development and urban construction. Although people tend to interpret “next civilized city” in their own ways, this difference, rather than hindering our discussion, would help take our discussion further, so as to facilitate new consensus.

Today I would broach the topic of “next civilized city” by talking about the development of Pudong, which I happen to be familiar with. For a long time, due to our lack of capacity to either build a bridge or a tunnel across the Huangpu River, Pudong, the area lying east of the Huangpu River, had not been developed effectively. In April 1990, the Chinese government announced the development of Pudong, and the Pudong New Area was launched in January 1993. It would be worthwhile to review the urbanizing process of Pudong during the preliminary stage of its development. In the past, Pudong was predominantly about farm fields and water ponds, and shabby residences that were often crammed. The situation gave rise to a local idiom that the Shanghainese would rather “have a bed in Puxi (west of Shanghai) rather than a flat in Pudong.”

Farmers in the Pudong New Area used to number more than half a million, but in less than two decades, 80 percent of local farmers had been urbanized. Urbanization at such a breakneck speed is unprecedented and, if handled improperly, might give rise to serious social problems. We treated farmers uprooted from their fields with discretion, giving them sufficient compensation, training them for new professions, and providing them with employment. To those temporarily jobless and those senior in age, we provided them with long-term living subsidies. Most important of all, we made education easily accessible to youth and juveniles.

The objective of developing Pudong was not to make it look like a city, with skyscrapers, apartment buildings, highways, airports, modern factories, or just financial and commercial districts, hi-tech zones and a free trade zone, but to build it into a modern, civilized district in a metropolis. Thus we keep reminding ourselves that the tone of new urban civilization must be raised to keep up with the growth in urbanization. 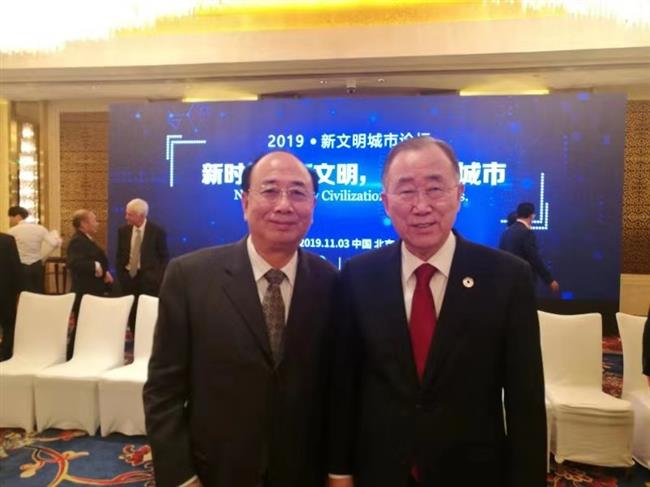 Zhao Qizheng with Ban Ki-moon, former Secretary-General of the United Nations, at the "2019 Future Consensus Forum"

The soul of new civilized cities is to stay abreast of the times in cultivating spiritual civilization. Just as urban material civilization keeps advancing, the development of spiritual civilization would never stop. At the very beginning of Pudong’s development we made it very clear that “Pudong development is not just about development of projects, but about social development, or the overall progress of the society,” of which the most important metric is the progress in spiritual civilization. When officials from Pudong had exchanges with UNDP officials, this concept got fully affirmed by the UNDP officials, who used to see Chinese development more in light of purely economic sense. During the first years of the development, the fiscal income of Pudong was limited, but we tried our best to spend the limited income on the construction of primary and middle schools and kindergartens, so that village children could receive the best education at an early age. Then, growing local revenues were committed to the launching of universities, good hospitals and libraries.

A library is a typical combination of material and spiritual civilizations. The new Pudong New Area Library covers a space of 60,000 square meters, and has a collection of 3.9 million books, the best of its kind in China. Each day the library could receive more than 10,000 readers. In 2010, the International Federation of Library Associations and Institutions awarded the library the best practice award.

Sanitation and cleanliness of a city is an indicator of urban civilization. Compared with what South Korea has done, our rubbish disposal still leaves much to be desired. Now Shanghai is promoting a rubbish sorting scheme in a bid to be a leader in this sector among cities in China. Knowledge about rubbish sorting, popularized through TV, advertising and publicity pamphlets, helps local Shanghai residents to be more compliant with sorting rules. In Shanghai on an average day about 15,000 tons of household rubbish is produced. About 20,000 rubbish collection stations have been set up, and about 4,200 new rubbish handling vehicles have been put in place. But more important is the fostering of the new sorting habits among the residents.

The urbanization rate in China has picked up rapidly during the 40 years since the opening-up and reform, averaging an increase of one percentage point per year, to 59.6 percent. But judging from the experience of developed countries, it could be concluded that the urbanization in China has not ended yet, and there is still room for significant growth. By 2035, the urbanization rate here expects to hit 75 percent. This year alone about 100 million villagers would go to cities.

The urban civilization promotion in China would continue as China expands its reform and opening-up. During this process, we would strengthen international cooperation, placing particular emphasis on cooperation with those countries in Asia whose traditional civilizations bear similarities to ours. Thus we entertain high hopes for cooperation with South Korea.

Thank Secretary General Ban Ki-moon and other friends from South Korea who have helped make this forum possible in China.

I hope the forum would be a great success!

A note from the author: In Shanghai, rubbish totals 35,000 tons per day. In Beijing, its population of 21 million produced 8.72 million tons of household waste in 2016, averaging 23,000 tons per day. The waste produced in five days would be enough to fill up the Kunming Lake. If a truck has a carrying capacity of 2.5 ton, the trucks needed could line up all the way along the Fourth Ring Road in Beijing.

This is Zhao Qizheng's speech at the opening ceremony of "2019 Future Consensus Forum: Next Civilized City and Sustainable Development" (November 2-3) in Beijing. Shanghai Daily translated the speech from Chinese to English.