A Chinese official on Tuesday urged the world's think tanks and media professionals to help promote the dialogue and transcend civilizational conflicts.

"As a nexus of people from different countries, think tanks and media should promote world peace and win-win cooperation," said Huang Kunming, a member of the political bureau of the Communist Party of China's Central Committee and the head of its publicity department. He was addressing the forum "China's 70-Year Development and the Building of a Community with a Shared Future for Mankind" on the sidelines of the second China International Import Expo in Shanghai.

"History tells us that opening-up brings prosperity, while a closed door hinders development," he said. "Through win-win cooperation, China will bring the world an opportunity of development." 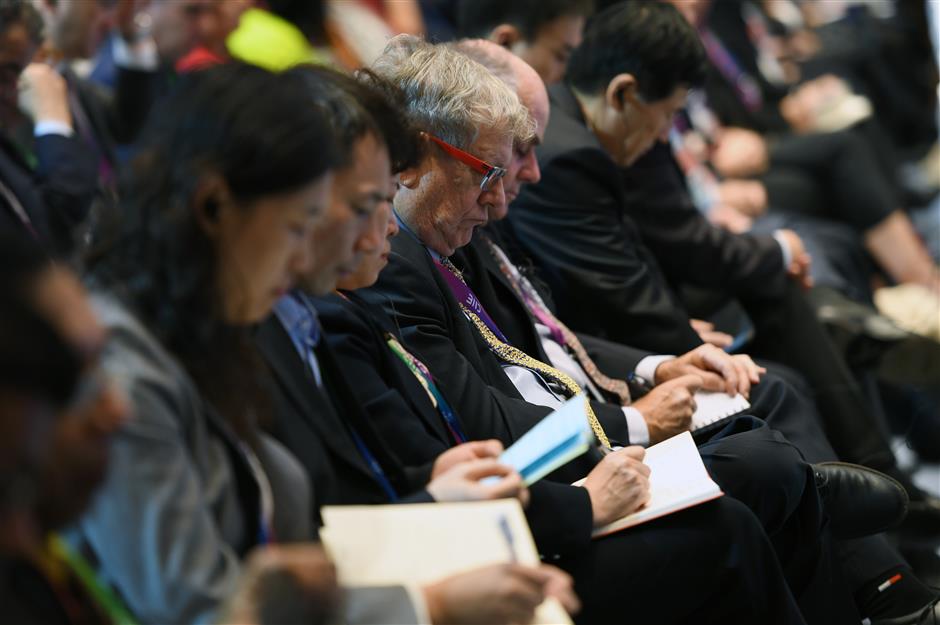 Participants take notes during the forum "China's 70-Year Development and the Building of a Community with a Shared Future for Mankind" on Tuesday.

Addressing hundreds of delegates from the world's think tanks and media outlets, he said the CIIE is by no means a China solo, but rather a world chorus. For many years, he said, China had contributed at least 30 percent of global growth, and all countries are welcome to jump on the bandwagon of China's fast growth. "As China develops, it benefits the world at large," he said.

China's development over the past 70 years, he said, was a miracle in that it had achieved a rare economic growth momentum and sustained social stability. Such an achievement was made possible with Chinese people's independent and hard work under the leadership of the Communist Party of China, he said, adding that copying from books or foreign models or relying on external favors would not work.

Xie Fuzhan, president of the Chinese Academy of Social Sciences, told the forum that China, having achieved a historical success over the past 70 years, will continue to follow a path of peaceful development and make greater contributions to the community of a shared future for mankind.

Huang said China did not agree that a nation will necessarily turn hegemonic as it becomes stronger. He said China will neither import foreign models of development nor export its own.

Martin Jacques, senior visiting researcher at Asian Research Center of London School of Economics and China Institute of Fudan University, said China could not be copied, but the world would benefit by learning from China, just as China was a wonderful learner.

Special Reports
ADVERTISEMENT
61840
,
Reflections on China's effective containment tactic
Living under the shadows of two pandemics
Amid times of uncertainty, app preserves messages of hope and happiness
Vlog: Is Shanghai really getting back to normal?
Vlog: How does quarantine in Shanghai compare with New Zealand?
Inconvenient truth about the missed opportunity
The West's long learning curve in mitigating pandemic's economic impact
China success in containment of COVID-19 valuable
A simple way to keep COVID-19 economy working
A financial review of the pandemic control
EXPLORE SHINE