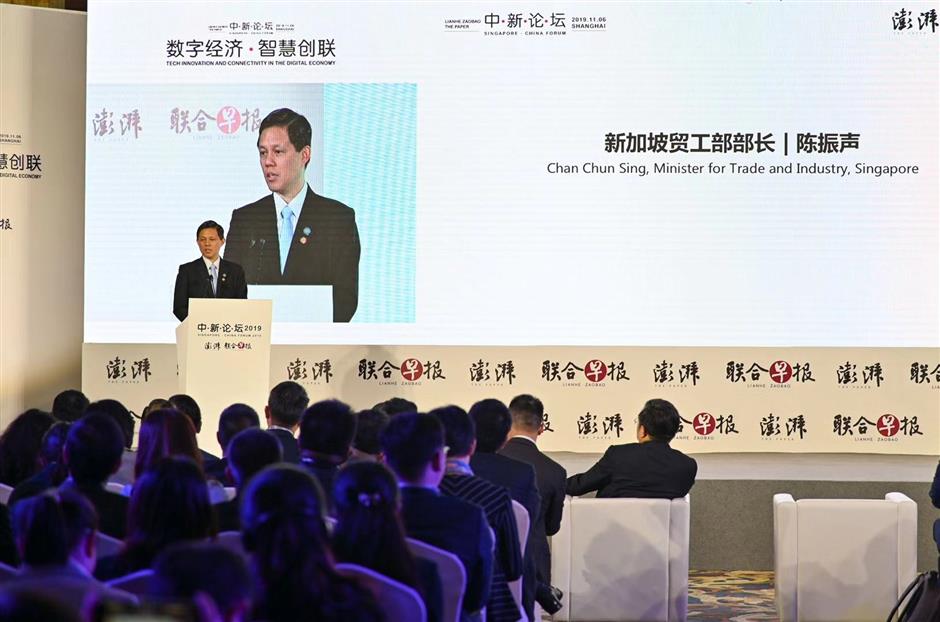 Chan Chun Sing, Minister for Trade and Industry of Singapore, speaks at a forum on digital economy yesterday in Shanghai that was organized by The Paper and Singapore's Lianhe Zaobao.

Singapore has been a key facilitator in China's past 30 years of reform and opening up, championing a series of government-to-government projects that helped set the stage for China's economic boom.

Looking back on the past 30 years of cooperation, policymakers, business leaders and academics from both countries are setting sights on pushing the relationship to new heights.

At a local forum organized by The Paper, a digital news app featuring in-depth news coverage and analysis, and Lianhe Zaobao, the largest Chinese-language newspaper by circulation in Singapore, speakers from China and Singapore shared their perspectives on the future opportunities and challenges facing the two countries as they both have been pioneers of a digital economy.

In his keynote speech, Chan Chun Sing, Minister for Trade and Industry of Singapore, said succinctly that the humanity is now at a crossroads, tasked with the mission to tackle major challenges.

"The fundamental question for the next 10 to 15 years is: Will the world become more integrated or fragmented?" he told the forum.

In the face of rising tides of protectionism and a couple of other thorny issues, Chan noted that national governments have to make new domestic and international adjustments to adapt to those challenges.

"If we were to continue to enjoy the benefits of globalization, optimize our production systems... then the digital economy will have to play the most important role in the next 10 years," he said.

Chan added this undertaking will involve not just physical integration; going forward, underpinning the world economy will be non-physical dimensions, such as data technology.

As a veteran practitioner in Singapore-China relations, Chan pointed out that the establishment in 1994 of the Suzhou Industrial Park, the first major project that signaled the beginning of Singapore's all-out participation in China's economic reforms in the 1990s, is of symbolic significance as the strategic decision to invest in China represents a "statement of our confidence and faith about China's integration into the global economy."

Almost three decades on, this early aspiration has come to fruition. China has grown into an economic powerhouse, with several city clusters along its coastline acting as the best spokesmen of its vitality. Entrepreneurs and policymakers from both sides are now looking to write the next chapter in Singapore-China collaboration, as the two countries will celebrate the 30th anniversary of the establishment of their diplomatic ties next year.

And the new cooperation has been underway, as evidenced by a number of high-profile initiatives the two countries have undertaken.

From the Tianjin Eco-City project carried out in partnership with Singapore, to the city-state's closer links with tech hubs like Shenzhen and Shanghai, and more recently with its agreement with the southwestern city of Chongqing on strategic connectivity, Singapore is sending a clear message, in Chan's words, that it is reaching the next phase of economic cooperation with China.

Under new circumstances, the focus will be on channeling energies into connecting groups of cities, synergizing their competitiveness and bringing out their greater potential as a region.

It is with this aim in mind that Singapore has worked with Chongqing authority since 2015 to boost connectivity as part of the bigger push to bring down financial and logistics costs. If successful, this endeavor will bring out the growth potential of China's western region, said to encompass 12 provinces. "What is being highlighted and done is Chongqing will be replicated in the wider Western region," said Chan.

His claims hit home to the audience, as Singapore's bid to bolster connectivity between Chongqing and a dozen other Chinese provinces accords with China's Belt and Road Initiative.

Toward the end of his speech, Chan also advised China to formulate a strategy to "win over the world."

At a time of great geopolitical turbulence, the traditional approach of contesting and trying to prevail over opponents has been a "wrong perspective," warned the Singaporean politician. Instead, the correct approach, or indeed, the “highest strategy,” is to win without fighting.

"In today's moment of history, it is not about beating the opponents. Instead, we need to surpass ourselves to win over the rest of the world," said Chan.

He explained that this can start with spearheading efforts to set higher standards on subjects ranging from technology to governance. Despite the gross disparity in their size, economic weight, history and culture, China and Singapore have a lot of shared aspirations and aims, and this is an area where the two countries need and can work even more closely.

Now is a moment that China can and should treasure to set its standards in diplomacy, technology and so on, Chan noted.