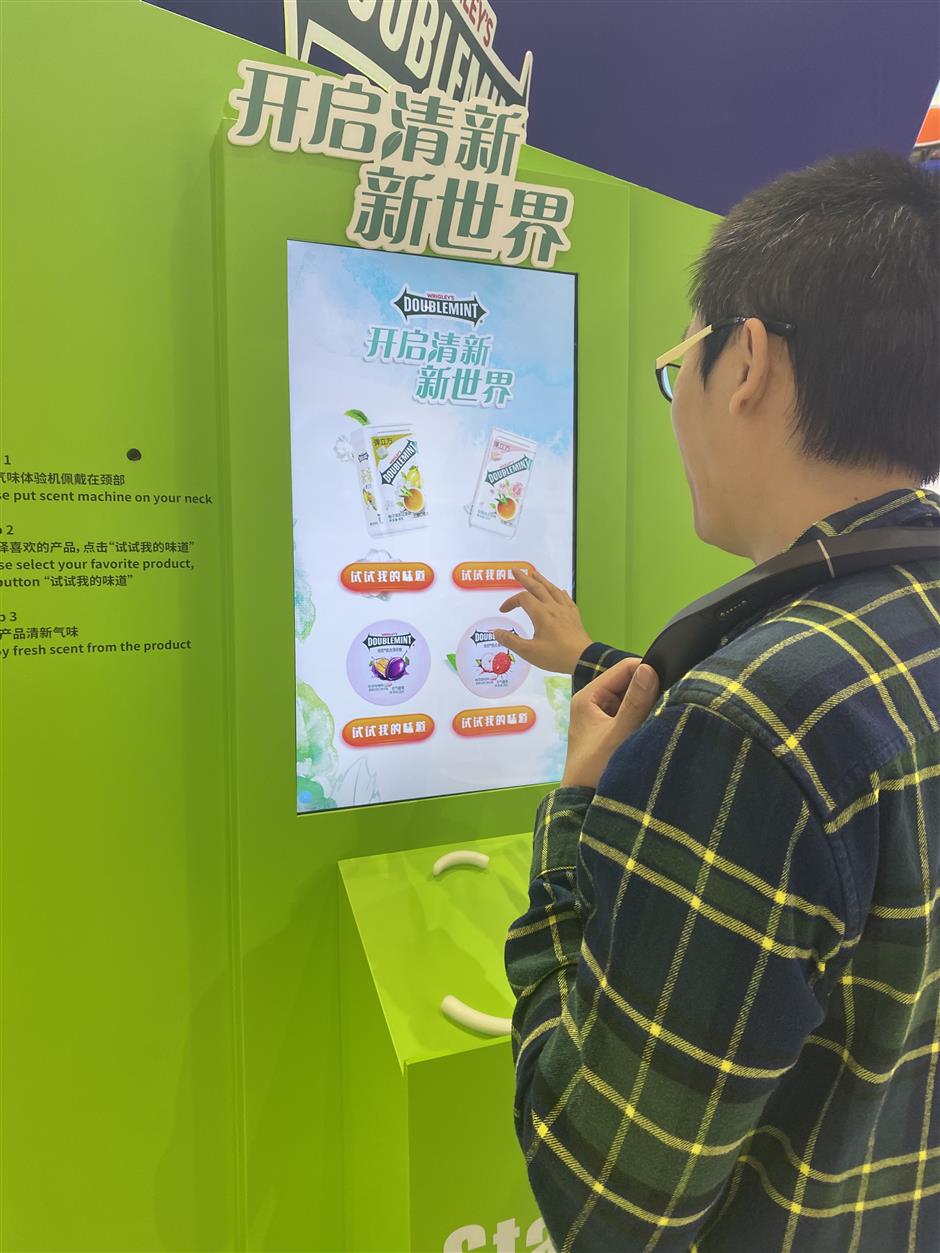 A visitor uses the Mars wearable device to experience the scent of flavors he desires for his chewing gum. — Photo courtesy of Mars

The second China International Import Expo (CIIE) in Shanghai has been a frontier for new concepts and gimmicks in marketing.

Food and pet care giant Mars Inc is one of a rising crop of multinational companies that are looking to ride on the crest of a technology wave to sell to Chinese consumers.

A highlight of the firm’s exhibits at this year’s CIIE includes a smart shelf that is able to recommend purchases for consumers by identifying their possible taste preferences through data analytics enabled by facial recognition.

During the US food giant’s second participation in the import expo, it enlarged its exhibition area by 30 percent to 102 square meters. And in addition to a richer product category, the use of technologies like facial recognition has been part and parcel of the firm’s ploy to enhance customer experience and foster interaction with the brand.

“We welcome customers to immerse themselves in a real shopping environment and see how technology is being employed to make the experience fun, tech-filled and convenient,” Clarence Mak, President of Mars Wrigley China, said in a written reply to Shanghai Daily’s interview questions.

Visitors to the Mars booth at the National Exhibition and Convention Center are encouraged to stand in front of what looks like a vending machine and wear a headphone-like device around their necks. Different scents — jasmine, rose, lychee and dark plum — will waft from the device with the press of a few buttons on the screen.

“As a leading food company, we are strongly dedicated to the application of cutting-edge means of digitization in food and retail sectors,” said Mak. “We expect to introduce more of these novel marketing tools to highlight the advances of Mars in digital transformation.”

Mars is but one of the many foreign businesses that bet big on going digital to cater to an increasingly astute clientele. To satisfy changing local palates, Mars has teamed up with Tmall, the business-to-customer affiliate of e-commerce giant Alibaba, in the area of big data mining and analysis. Some of the consumer insights that arose from this tie-up later found their way into new products like a chili-flavored Snickers chocolate bar, which Mars said it developed based on Chinese fondness for spicy foods.

Mars is far from the only beneficiary of China’s retail revolution that is increasingly heavy on the use of technology and Internet memes to help sales. Many small and medium enterprises have also carved out a niche thanks to the positive effects of CIIE on marketing and branding.

Zhang Tongyang, brand manager at Zambia Mpundu Wild Honey Co Ltd, was inundated with work in the run-up to the opening of CIIE, responsible for work ranging from decorating the firm’s booth to answering media and client calls.

In a phone interview with Shanghai Daily, he said when his company first took part in CIIE last year, the booth was small, covering only 9 square meters. Yet the wild honey on display at the nondescript booth proved a smash hit among curious visitors, many of whom said they never knew any specialty from Zambia.

He added a surge in demand from China has put the factory in Zambia under strain to step up its production, but that has been sort of a “sweet pain.” Immediately following the first CIIE, Zhang and his colleagues bought 500,000 yuan worth of production equipment from Zhejiang and Guangdong provinces. China’s increasing appetite for healthy, organic food like the Zambian honey also proves to be a boon to job creation. “Originally we planned to hire 300 more bee farmers, but eventually raised that figure to 1,000.”

The company, which previously was not a foreign food business certified by China’s quality supervision, inspection and quarantine authority, made painstaking efforts to apply for a permit to export to China. After about a year of communication with China’s Ministry of Commerce and General Administration of Customs, last March it obtained licenses necessary for selling its goods in China.

Zambian wild honey, which counts Germany, Great Britain and the Netherlands among its major overseas markets, is now anticipating a spike in orders from China, after Zhang’s employer became one of the officially recognized “Belt and Road” businesses under trade agreements signed at the Forum on China-Africa Cooperation last year in Beijing.

About one year after entering the Chinese market, Zhang said the firm is making adjustments to meet varied needs of local consumers. For example, the honey was available only in a 500-milliliter bottle at the first CIIE but now can be found in more formats, such as a 250-milliliter pack or even sachets as small as 10 grams.

Another trick to satisfy Chinese customers is to jump on the bandwagon of customization. Zhang’s firm has released exclusive honey boxes to be bought by customers who want their names stenciled on private honey pots.

“Chinese consumers like personalized services,” he said from the booth, which has multiplied by four times in size. “More measures will follow after the CIIE.”

He added the import expo also has the extra effect of improving knowledge about Zambia and its specialties, thereby furthering ChinaZambia friendship. China’s amicable ties with the southern African nation date back to 1967, when it sent engineers and workers to help build the Tanzania-Zambia railway.

The extravaganza is not just a platform for countries to draw attention to their merchandise, technologies or icons; it is also an occasion to bring world flavors to the mega-sized food marketplace that is Shanghai.

One of the most sought-after items at last year’s CIIE was the Ibérico ham from Spain. Long queues were a common sight in front of booths marketing this goody. La Encina Seleccion S.L. was one of the most visited booths that offered premium Ibérico, among other imported Spanish foodstuffs like wine and cheese.

“CIIE was direct proof that China has a huge demand for quality food including Spanish Ibérico,” Noe Ren, chief operating officer of La Encina Seleccion S.L.’s China subsidiary, said of the first CIIE. “Through the exhibition we gained many useful sales channels. With this, our business in China could get off to a promising start.”

To keep pace with a rise in demand, the Spanish firm signed up for the second CIIE, and this time came with expanded offerings, including its flagship Carrasco ham, which it likened to the “Hermès” of Ibérico. “We are keen on spreading the culture of Ibérico here,” Ren told Shanghai Daily.

Following its debut at CIIE last year, this Barcelona-based exhibitor quickly set up a unit in Shanghai, and latched onto the gigantic e-commerce network involving Taobao, JD, NetEase’s Yeation and WeChat Mall to “bring home the bacon.”

For industry leaders like Mars, the continued drive to deliver a richer variety of products has been the go-to strategy if they are to continue to appeal to a client base that is on the constant lookout for something new and innovative. In line with this strategy, Mars plans to launch new flavors of its BEKIND nuts bar in China, adding choices such as sea salt, grilled coconut chips and Madagascar vanilla, among others.

According to Mars, many of the products featured at CIIE last year were later sold via online shops. “This (result) is decided by consumer’s buying habits,” said Mak of Mars Wrigley China. “As one of our most important markets, Mars is eager to embrace China’s fastgrowing tech evolution and lift the quality of our services.”

To this end, the company has joined hands with tech titans like iFlytech and Sinovation Ventures to seek better digital solutions in retail. It also partners with e-commerce behemoths such as JD and Alibaba to optimize the whole production process from product development to marketing to logistics and sales.

As a front-row witness to the efforts China is making to increase the ease of doing business and make good on its commitment to an open, liberalized market with equal access for all, Mak said CIIE has provided firms like his with not only an opportunity to showcase themselves but also put them at the forefront of learning about local needs.