Drama rivets modern audience with a call to act on conscience 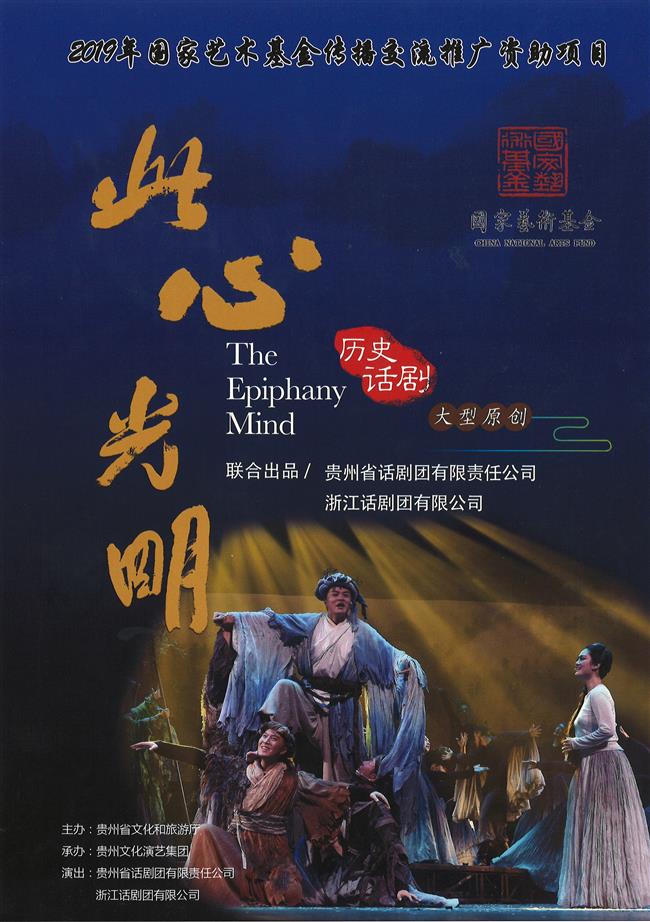 A poster of “The Epiphany Mind”

“You say everyone has a conscience, but why are there so many bad souls?”

“Even bad souls have a conscience, but they have blinded it with delusion, like a valley shades its flowers from the sun.”

The question and answer —­­ part of the riveting dialogues in the drama “The Epiphany Mind” — moved many audiences to tears on Monday as the words struck a chord with the modern mind mulling over what the ultimate good should be. It was a dialogue that happened in the 16th-century China between Wang Yangming (1472-1529) and his disciples. A scholar-official, military strategist and philosopher, Wang has influenced his contemporaries and latter-day China and Japan with his theory of the mind that urges man to act on conscience and cast off concerns for personal gain or loss.

Zhang Taiyan (1869-1936), a democratic revolutionary and thinker, said Wang’s thought, known as Yangming Xinxue (Yangming mind learning), had served as a prelude to Japan’s Meiji Restoration in the 19th century. Takehiko Okada (1909-2004), an expert on Wang Yangming and a professor at Columbia University, said Wang’s thought began to influence Japan in the 17th century. Like those audiences from Qingpu District in western Shanghai, Okada said he once wept when he read about Wang’s self-discipline and self-sacrifice in serving his country during crises.

The two-hour drama, staged in the Cultural Hall of Qingpu District, conveyed Wang’s philosophy with a mixture of modern spoken language and archaic literary expressions that nearly everyone today can understand. Even grannies sitting beside me appeared glued to the plain plots pivoting around Wang’s pursuit for public good even in his darkest hours when he was framed and demoted despite his selfless service to his country and people.

Wang saved the Ming Dynasty (1638-1644) from a coup d’etat by almost single-handedly masterminding a blitz victory over a formidable rebel force. His success, however, hurt the “pride” of some eunuchs and officials, even the emperor himself. He had to “free” the captured rebel captain so that the emperor could pretend to “defeat” him once again.

I have read books by and about Wang Yangming and know a little bit about what he thought and did. But before Monday, I had doubted the drama could tell Wang’s story well, especially to the average modern audience. After all, Wang’s theory is not that well-known among the average people today. In case some have heard of it, not everyone understands or agrees that bad souls can have a conscience. When I saw so many grannies in the audience on Monday, I felt even more worried for the performing artists. Could anyone explain the science of mind easily to a granny?

My worries went away when I saw some grannies nodding to the question and answer, particularly to the analogy of a valley shading its flowers from the sun.

Aside from the analogy, the protagonist, Wang Yangming, told a story about a thief he had caught. In prison, Wang asked the thief to bare himself. The thief refused, saying “you could kill me but not humiliate me.” Wang used this example to show that even a thief had a sense of shyness and dignity. Wang also told the story of the rebel captain. Captured, he told Wang that his wife had committed suicide by jumping into a river, because she could not prevent him from rebelling, a cause she deemed unjust. He asked Wang to help find her body and bury her with due respect. This case, Wang explained, showed that even a rebel driven by lust for power knew who was respectable.

Conscience as defined by Mencius (372 BC-289 BC) is something that one knows without thinking, like a sense of right and wrong and empathy toward those who suffer. Wang partly inherited this thought and urged people to acknowledge and act on one’s conscience.

The playwriter Li Baoqun said he had designed a series of questions and answers toward the end of the drama to drive home Wang’s philosophy of the mind. Aware of the risk of empty philosophical talk that would alienate the audience, Li and the director of the drama arranged a narrator and a Greek-style strophe to help attract the attention of the audience to Wang’s vicissitudes of life. It was from these gripping stories that philosophical dialogues naturally emerged. “A well-told personal story will help the audience see for themselves how Wang gradually reached his height of thinking,” Li said.

Li’s narrative arc was not his own invention, though. To acquaint himself with the way Wang thought and taught, he had spent two years studying Wang’s deeds and visiting the places where Wang left his footprints, including his birthplace and a remote area to which he was demoted.

“Wang himself endeavored to spread his philosophy among grassroots people in ways accessible to them,” said Wu Zhen, a professor of philosophy at Fudan University. “His theory of conscience, plainly expressed, lent itself easily to the ear of the ordinary audience even in his own time.”

Wang’s thought emerged almost at the same time as Renaissance to encourage people to act out of conscience, not hypocrisy. After his death, his thought was somehow misunderstood in China. Li Bo, a professor at Nanjing Normal University who wrote a popular book on Wang Yangming two years ago, said Wang’s philosophy had been mistaken for idealism that claimed no natural reality existed outside one’s consciousness.

“Wang only said that the mind gave the world its meaning,” he explained. Wang did not deny the natural world; he only said that the ultimate way of the world that man should learn is to do good, and that everyone could do good by dusting their minds of mundane calculations.

“Yangming mind learning is a cure for today’s moral slack,” Li said. “Worldwide, his thought could light up human civilization when the logic of capital is caught in the middle of nowhere.”

Indeed, there will be no Thucydides Trap when people know they can act on conscience and for common good, however selfish or resentful others may appear. Heed the preamble to the constitution of UNESCO: “Since wars begin in the minds of men, it is in the minds of men that the defenses of peace must be constructed.”

Ye Xiaowen, former head of the National Religious Affairs Administration, last week cited Yangming mind learning as a tour de force to fight material temptation, saying one should look into his own heart for sources of strength. The same is true with the Communist Party of China facing the test of a market economy, he said.

To popularize Wang’s wisdom of doing good, the China National Arts Fund has supported the performance of the drama “The Epiphany Mind” across the country. In this Internet era of ours, in which immersive reading of classic books has become a luxury for many, a drama that even a granny likes to watch can nudge more people to find the better angels in themselves — an ability everyone has but many seem to have forgotten.