In 2018, I wrote a column featuring five culture shocks you might not expect when moving to Shanghai, which included things like drinking hot water, keeping things off the floor and calling in sick when you’re sick. Today I’m back with five more, but this time they’re culture shocks I still haven’t fully gotten used to.

It seems so rude not thanking friends or waiters or taxi drivers, but you soon realize — especially if you have local friends — that saying “thank you” is not only often unnecessary, but it can sometimes even offend people.

Some Chinese believe that saying “thank you” places distance between friends and family — it’s as though their help is already expected by default by way of relationship obligation. Saying “thanks,” then, places a distance between you and that person, and suggests to them that you don’t see them as particularly close. Somehow this has extended into the service sector as well, to a certain degree, so it’s also necessary to try not to think of staff as rude when you buy something and not have them thank you at the end.

I’ve slowly got used to not saying thanks to friends, even though it still goes against every bone in my body. But it’s okay: I make up for it by thanking shop staff, taxi drivers and delivery guys profusely each and every time.

Be an active customer

Restaurants and stores excluded, being an active customer is often required in Shanghai. If you enter a university office or hospital or dentist, don’t expect anyone sitting at the front desk to look up and ask how they can help. If you stand there politely waiting for them to finish what they’re doing, you might just be there all day.

Just shout out “halou nihao!” or similar to get their attention, and don’t worry about being rude by interrupting them, even if they look super busy — they won’t be offended and will just ask you to wait a minute.

A bicycle and motorcycle parking spot is placed across the entire width of a section of walking area on Niuzhuang Road in Huangpu District.

Walking on the road

The design of some of Shanghai’s roads and footpaths, and people’s walking, biking and driving habits, have been the source of many a frustration since I got here — in fact, I’ve written about this topic multiple times. I’ve gotten over a lot of these culture shocks, such as people rushing into trains before everyone is off and bikes zipping down footpaths.

But I still can’t quite fathom the fact that many of Shanghai’s roads and footpaths seem literally set up to fail. Take, for example, the picture above that I took while on a stroll. The very design of the footpath — namely that a bicycle and motorcycle parking spot has been placed across the entire width of a section of walking area (by whom I’d hate to guess) — literally forces pedestrians to step off from the sidewalk and onto the road. Such obstacles block footpaths so frequently that people have developed the habit of just walking down the road instead of stepping up and down every few meters.

This is bad for obvious reasons, but it doesn’t seem to bother the locals much. All I know is that anyone who okay’d such a design in New Zealand would probably lose their job. 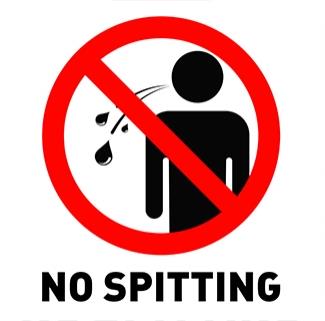 I had to add this one, because it’s something that still sends shivers down my spine on multiple occasions every day. For some reason, some people need to clear their throats and spit right on streets and in rubbish bins or hankies inside. And it’s never something discrete — it’s always accompanied by the loudest, most theatrical and gut-wrenching sounds.

The other day someone walking toward me on a busy sidewalk even hocked one up and spat directly in my path. For him it was nothing, but for me it was a personal attack, a call to war.

Maybe this is one culture shock I’ll never quite come to terms with.

Back in my home country, it’s illegal to use misleading pictures in advertisements or on menus and so on, but it seems par for the course here.

Back in the day, when I still didn’t quite have a handle on reading Chinese characters, I used to order food from waimai (food delivery) apps based on pictures. That habit soon stopped after I was given food about as dissimilar to the advertised picture as could be.

Once I was so hungry that I was craving a Big Mac from McDonald’s, but there wasn’t one open nearby so I ordered a burger that looked surprisingly similar online from a 24-hour takeaway store. About 20 minutes later, I received a soggy chicken burger with lettuce and a splash of tomato sauce. It turned out the picture was a Big Mac, but the owner just used it for “illustrative purposes.”

While it’s important to understand that every culture is different, some things may seem just too far from your own habits and beliefs to accept easily.

Keep trying, and don’t give up!