I got off my Air New Zealand flight from Auckland in Tokyo, Japan, on Wednesday to smiles and farewells from a beaming flight crew without masks, gloves or eye protection. As soon as I stepped one foot out of the plane I was met with masked and goggled airport crew. Anyone else may have felt like they’d walked into a nightmare, but the reality is that I probably just walked out of one.

I rushed through Narita airport to find my new flight, Spring Airlines to Shanghai. I’d be home soon, or so I thought.

Walking down the gangway to board my flight brought a sight I’ve seen in the media but never with my own eyes: three people standing at the entrance of the plane in full protective suits, not a millimeter of human skin showing. It was my flight crew, and they still managed to greet me with a smile. I could only tell by the movement of their eyes which I could make out through shiny goggles and a spattering of condensation. 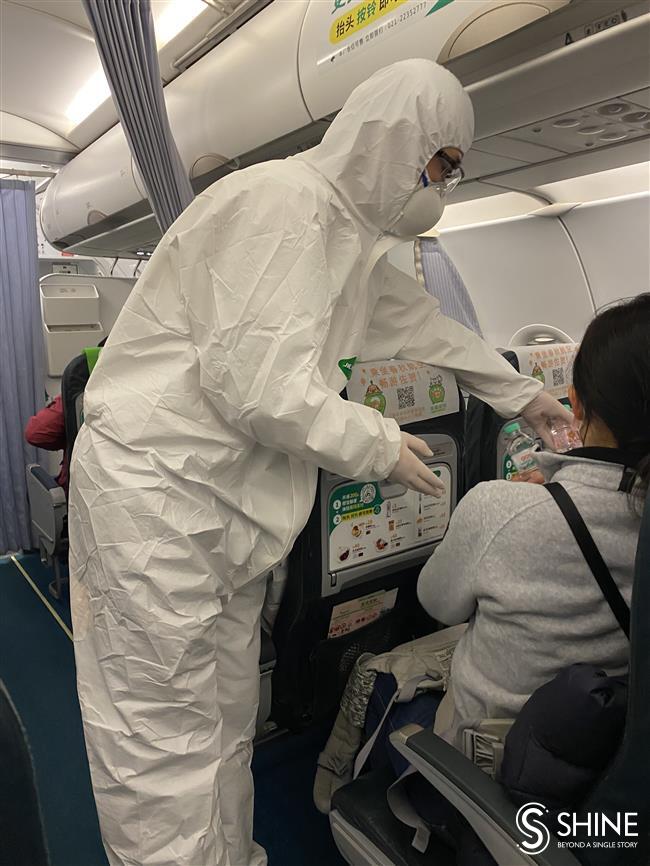 A flight attendant on the Spring Airlines service from Tokyo Narita to Shanghai Pudong attends to a passenger while donning full protective gear.

Every single person on the plane was at least wearing a mask, and some even wore full protective gear. A far cry from my flight on Air New Zealand, with a crew who had absolutely no protection and would soon return to New Zealand from Japan — one of the hardest hit areas in Asia — without any questions, much less quarantine.

We landed in Shanghai and were greeted by officials from the ground, also in protective gear, who soon invited us to enter the airport and begin the new process of immigration under COVID-19. We passed through many different checkpoints, answering a multitude of questions. A yellow sticker was placed on my passport, which they said means I come from a place of concern but show no symptoms.

After collecting my bags and heading out of immigration — when you’d normally be free to go home — I was sent into the “yellow” line, which took me, eventually, to the counter for Jing’an District, where I live. They would be responsible for transporting me, under quarantine conditions, to the Pengpu Town Community Health Service Center. 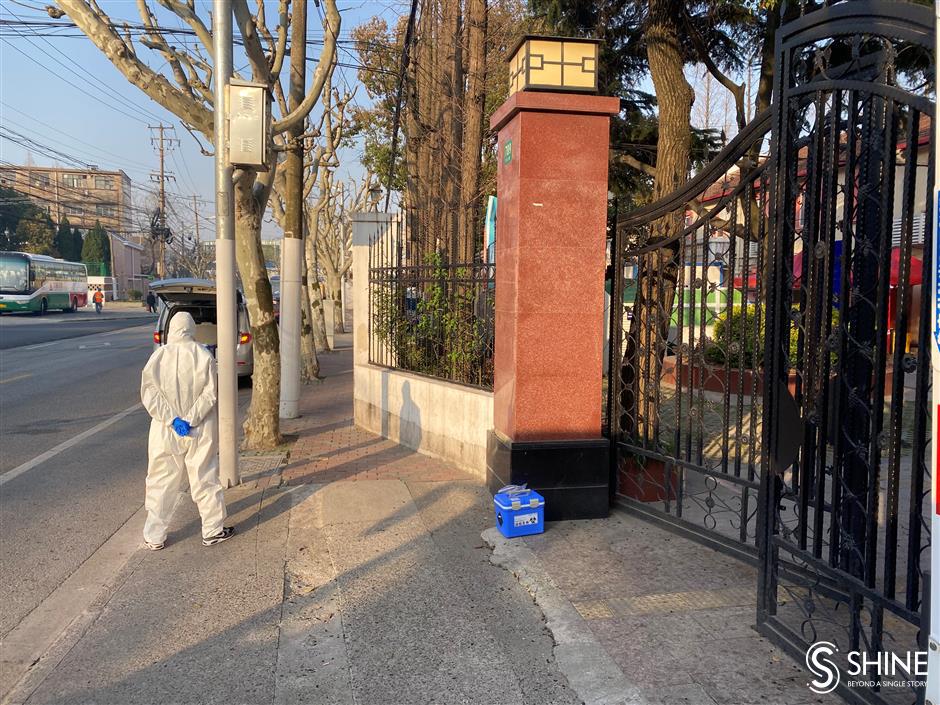 The early morning sun rises on the locked gates of the testing center, after a long night sleeping on the quarantine bus. 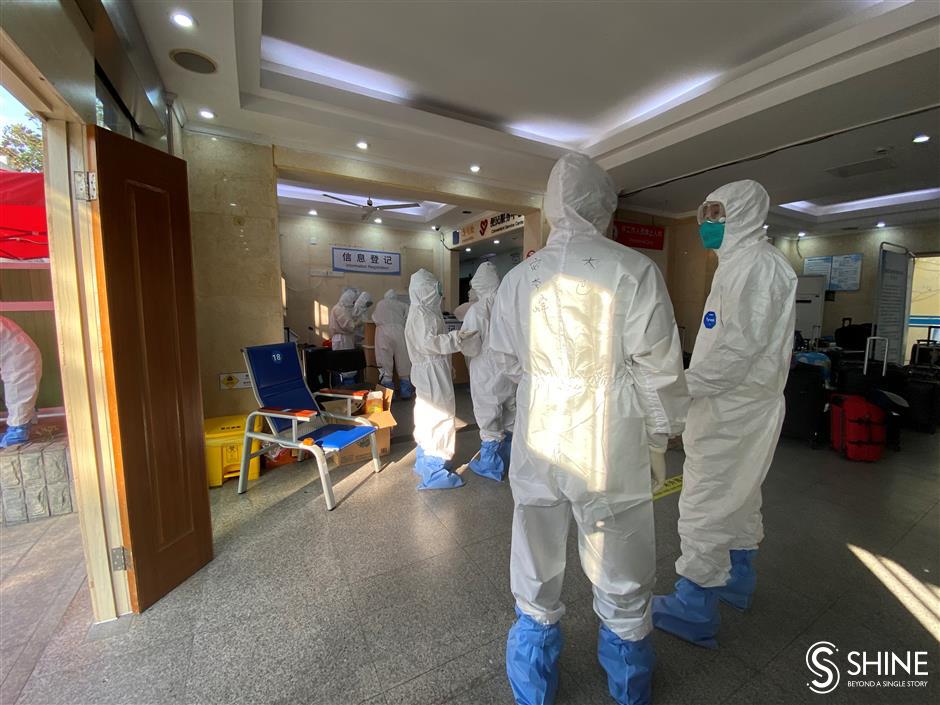 Nurses wait to test passengers for novel coronavirus at a community health center in Jing'an District.

Because of new rules that had just been enforced in Shanghai, I would be required to undergo a novel coronavirus test before being allowed to go home for 14 days’ quarantine since I transited through Japan, a hard-hit area.

Our group had about 15 or so, Chinese and foreigners, who had returned to Shanghai from the 16 countries of concern Shanghai had stipulated the day before.

When we pulled up to the center, followed by our police escort, we noticed there were two buses in front, also waiting outside. “We need to wait a while here, because we’re the third bus in line,” our nurse told us through his mask. We didn’t realize then, but we would be spending the night in the bus, not heading inside the center until 8am when the sun was bright.

After sitting in seats spaced apart, we were quickly tested for COVID-19. The procedure is called acid nucleic testing, and it requires a swab from the back of your throat. It was over really quickly, and soon most of our group were sent back to the bus, again under strict quarantine, to be taken to an “alternate site” to wait for the result. Three of us stayed behind and were put in the single remaining room in the center, together. 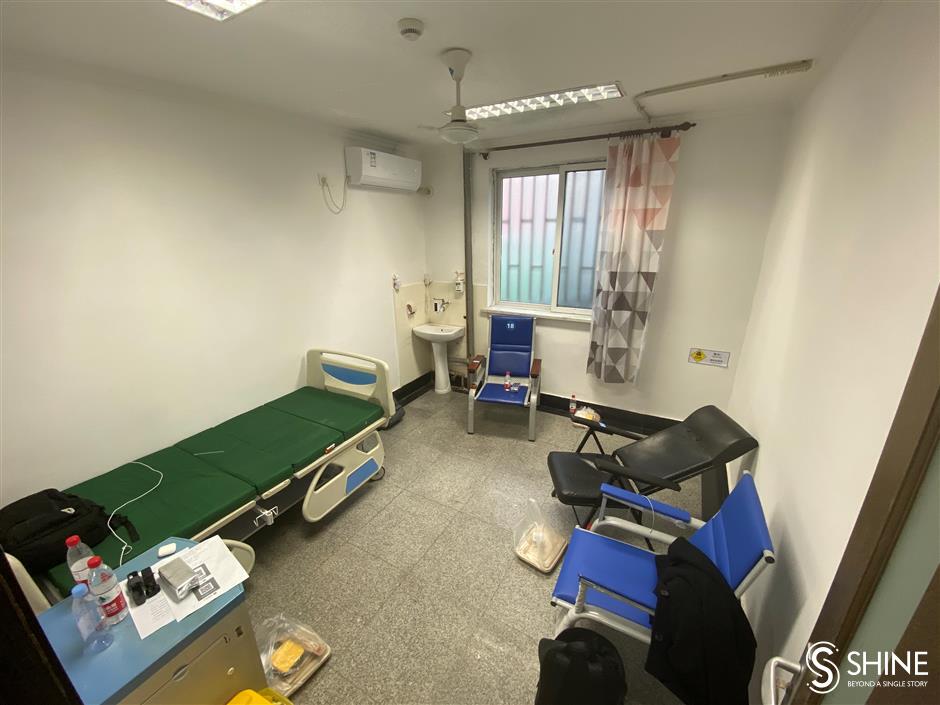 Some passengers were sent to designated hotels to await test results, while others, like me, waited it out in the health center.

We soon started getting messages from people we met on the bus showing off their nice hotel rooms and free food. We weren’t so lucky: our room had a hospital bed and two chairs, and no free food. We would be staying in the center for the 8-12 hours it takes to get our results back.

I took part in a quick interview via Skype with a popular current affairs show in New Zealand where I compared China’s COVID-19 response to my own country’s. I was honest, to say the least, and would soon be branded a “Communist” on social media comments for suggesting that New Zealand enforce stronger measures.

In the end, it took 13 hours for our results to come back, and I felt a huge relief. I don’t know how much longer I could stay cooped up in a health facility and now have a real sense of empathy for those who aren’t as lucky as me.

We waited another two hours for the bus to get back and were officially handed over, one by one, to the nurse in charge of the bus. We were still in strict quarantine as we were dropped off at our homes, one by one, with a police escort. When I arrived at my home, an official from my community was waiting at the bus. I was signed over to her and then allowed to go home for a much-needed sleep.

At around 8am there was a knock on my door, and I was met by four officials in full protective gear to hear about my quarantine conditions. A unit was attached to my door that will tell officials when it is opened. I can only open it to pick up deliveries that neighborhood committee members drop off for me, or to put my rubbish outside my door which will be collected around 4pm daily. I need to send a message in a WeChat group they have created for me announcing when and why I am opening the door.

When I had a moment to think this morning, I imagined that Air New Zealand crew enjoying Tokyo — a beautiful city — for at least a night before they board a flight back home, all without masks or goggles or any protection at all. When they arrive in New Zealand they’ll get off the plane, go through immigration without a question, and be picked up by their loved ones or ride public transport home.

It’s a stark contrast to what I have been through in the past 36 hours, all because I transited in Narita airport for a few hours. I know and accept that what I went through needs to be done. I am at risk, and those around me are at risk, because of where I have been. If only New Zealand, and other countries in the world, realized that sooner and pulled their heads out of the sand.

Some call me a Communist for suggesting New Zealand isn’t doing enough, and for suggesting governments look to China for advice around how to deal with this virus. But some are also level-headed and can see through the politicization of a hideous situation.

“He is right,” Camellia Lee posted online about my comments on New Zealand television. “Until recently (New Zealand’s) government wasn’t doing enough ... Our geographical location is probably the only reason we have not ended up like Italy.”

China’s measures may seem extreme to Western eyes, but ignoring their effectiveness based on ideology will come at a huge cost to us all. 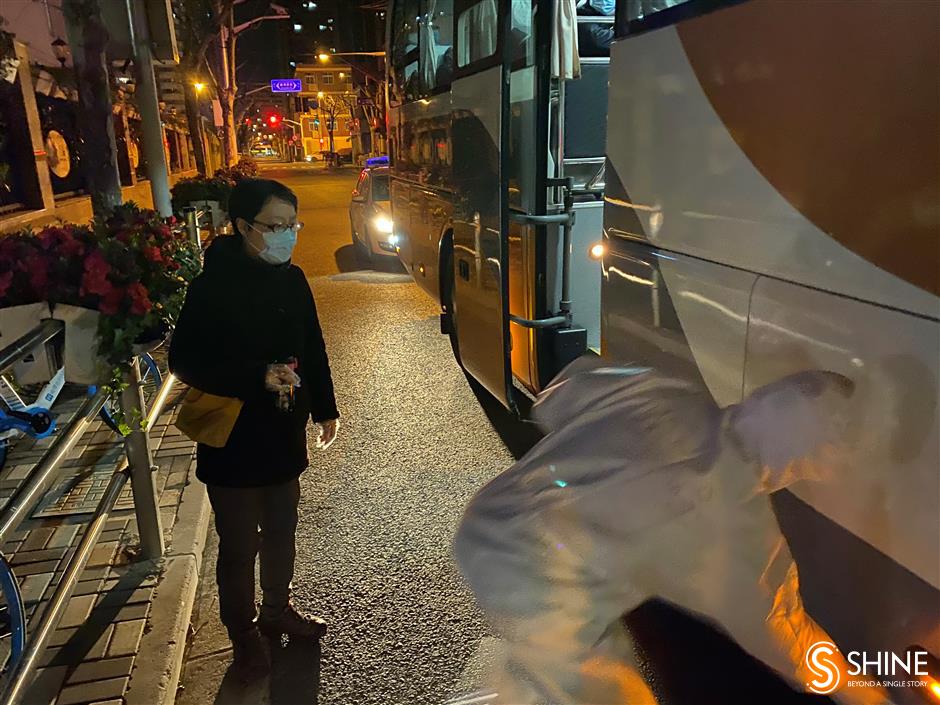 A neighborhood committee official met me at the bus and signed off to receive me for home quarantine. 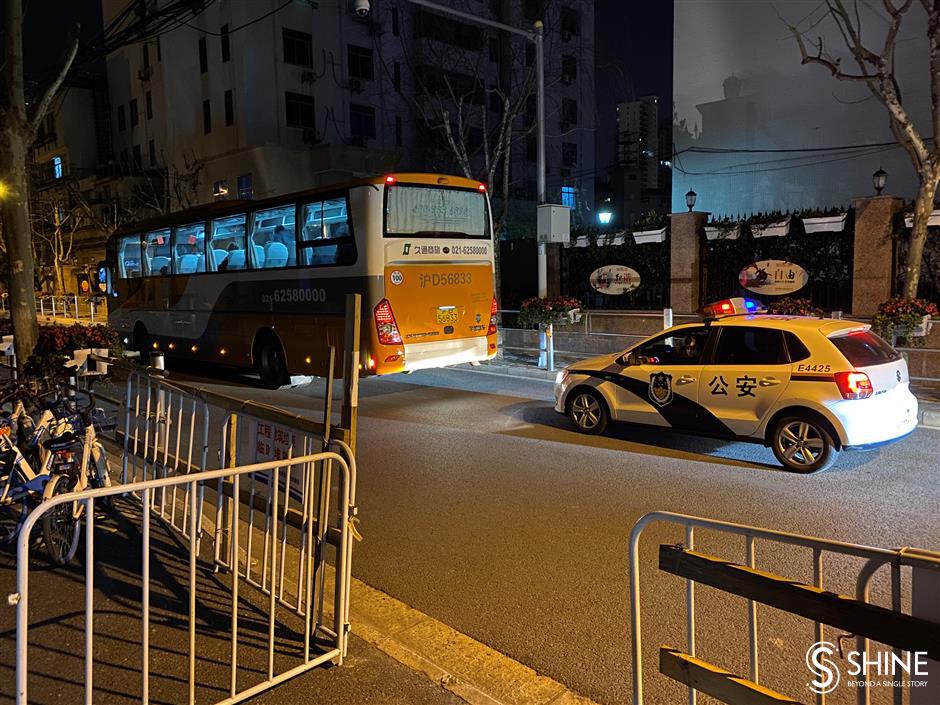 A police escort follows the quarantine bus as it leaves my home to drop other passengers off around Jing'an District.