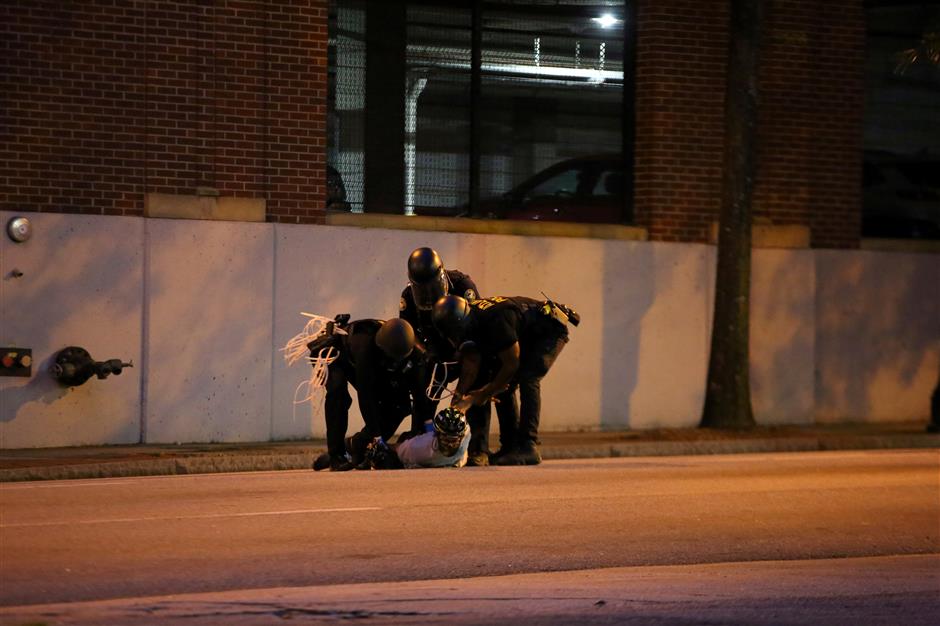 A photographer is detained during a protest against the death in Minneapolis in police custody of African-American man George Floyd in Atlanta, Georgia, on June 1.

It is no surprise that journalists would go out to the streets to cover the largest and most widespread protests the United States has experienced in more than 50 years. What has been surprising is that journalists would meet with violence and retaliation at the hands of the police, just for doing their jobs.

Since the start of the demonstrations against systemic racism and police brutality that have swept the US in the wake of the death of George Floyd, there have been more than 380 reported incidents of anti-press violence.

While some have involved journalists being caught in the melee of violent protests and rioting, the vast majority appear to have been perpetrated by law enforcement, according to an investigation by a US agency.

These flagrant violations of press freedom have been as widespread as the protests themselves, with reports coming from 61 communities in 33 states. The police behind these attacks are failing to abide by the law and uphold the US Constitution. Journalists who have clearly identified themselves, presented press credentials, and carried professional equipment have been assaulted, arrested and shot at anyway. Determining just how prevalent these targeted attacks have been will be critical for addressing the broader problem of police impunity.

Some of the attacks against journalists appear to have been racially motivated. In a live broadcast from Minneapolis on May 29, CNN correspondent Omar Jimenez can be seen calmly telling police officers that he is a reporter, only to be arrested anyway. As the camera pans to the ground, one catches a glimpse of his entire crew being taken into custody. Meanwhile, a block away, Jimenez’s white colleague continued to report from the scene unmolested. In another incident, Detroit police officers were spotted demanding to see a black reporter’s credentials while leaving his white colleagues alone.

Although Minnesota Governor Tim Walz has since apologized to Jimenez and the CNN crew, the attacks on journalists covering the protests in his state have continued. If anything, the fact that Minneapolis police could arrest a CNN reporter in the first place signals to law enforcement everywhere that all tactics are now on the table. According to the Committee to Protect Journalists (CPJ), there have since been at least 54 more arrests of journalists, including several who also were broadcasting live. In these cases, the officers involved seemed to know they were being recorded and did it anyway.

The fact that police officers are not deterred by the presence of a camera should alarm all Americans. Just as Minneapolis police officer Derek Chauvin can be seen looking directly into the camera as he presses his knee into Floyd’s neck, police who allow themselves to be filmed attacking journalists and other civilians clearly do not fear consequences. After all, police in the US enjoy “qualified immunity,” which is why they have long faced little or no accountability for grave injustices committed against African-Americans like Floyd.

This is not just a domestic US problem. Several of the journalists who have been attacked by police recently are foreign correspondents working for overseas outlets. For example, Australian television journalist Amelia Brace was broadcasting live from outside the White House when she and her cameraman were suddenly attacked by a phalanx of heavily armed police. Similarly, German journalist Stefan Simons was shot at numerous times by Minneapolis police despite repeatedly shouting “I’m press.”

Police attacks on journalists must be met with swift and meaningful accountability. That means rooting out the bad apples as well as the rot that has spread more widely across America’s police forces. As the protests have shown, only when impunity ends can justice begin.

Courtney C. Radsch is advocacy director of the Committee to Protect Journalists. Copyright: Project Syndicate, 2020. www.project-syndicate.org. The views are her own.

Special Reports
ADVERTISEMENT
Journalists should not be attacked by US police for doing their jobs
Making a strong case for communal approach to health
New Zealand defies my predictions, thrashes COVID-19 after lockdown
What I learned as a parent when school reopened
Going extra mile turns good intentions into better outcomes
Which economic stimulus works better to fight COVID-19?
Mankind is a community with a shared future
Vlog: Squeezed in like sardines at uber popular Anyi Night Market
Quality Life Week so much more than material consumption
Vlog: Cooking, coffee, crafts and fruit picking at a Shanghai village
EXPLORE SHINE