The global impact of COVID-19 resurgence in US 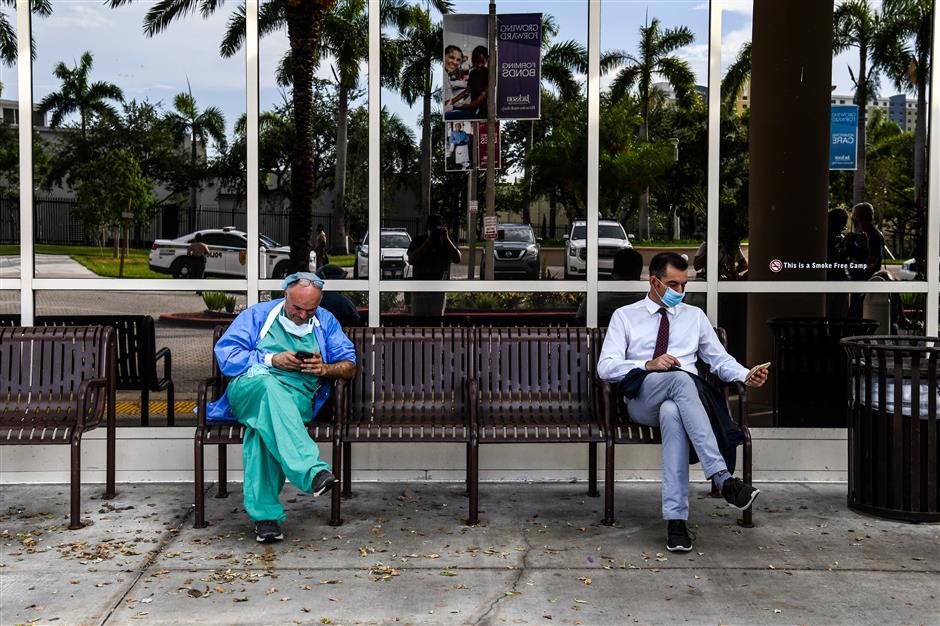 A doctor (left) wearing personal protective equipment uses his mobile phone as he sits outside Jackson Memorial Hospital in Miami, on July 13, 2020.

Recently, the US has suffered a series of COVID-19 surges. The escalation won’t stay in America. It is likely to cause collateral damage worldwide.

In early June, US states began to exit from the lockdown measures, even though the epidemic curve had not been adequately flattened. On July 4, the White House sought for a “return to normal” with a celebration at Mount Rushmore.

Once again, the crowds were not required to wear face masks or practice social distancing, although the US has recently tallied its highest single-day total of coronavirus infections.

Confirmed virus cases in the US could exceed 4 million after mid-July, with over 140,000 deaths, while new cases average over 50,000 daily.

As a result of crisis mishandling, US GDP growth suffered a 5 percent contraction in the first quarter, which is likely to be followed by a historical 53 percent plunge in the second quarter. The COVID-19 surge across America is no surprise, however. It was only to be expected in light of the catastrophic mishandling of the pandemic by the White House.

On January 3, when the virus gene sequencing was completed by China and emergency monitoring initiated, Chinese officials notified WHO. That’s when US CDC director Dr Robert R. Redfield called Alex M. Azar II, secretary of health, telling him that China had potentially discovered a new coronavirus.

Yet, no proactive mobilization occurred. Instead, a long debate began within the Trump administration over “what to tell to the American public.”

When the WHO declared the virus “a public health emergency of international concern” on January 30, first cases were also recorded in 20 countries worldwide, including the US. But again, the White House chose not to mobilize.

Even when the epicenter moved from Europe to the US, the White House delayed full response. It was only after March 11, when the WHO declared the virus a pandemic, that the White House began to mobilize federal resources against the outbreak.

To win reelection, the current US administration has tried to evade responsibility by blaming WHO and China for its mistakes. Yet, COVID-19 mobilization in the US failed, due to complacency, belated mobilization, inadequate preparedness, poorly enforced lockdowns, premature exits from quarantines, failed leadership, and the list goes on. Worse, the decision to exit the US from the WHO will compound public-health risks in the future, both in the US and worldwide. But the long-term international implications may prove even worse.

What happens in America will not stay in America.

Due to months of fattening rather than flattening the curve and the associated resurgence of COVID-19 in the US, international exits from lockdowns and global economic recovery are virtually ensured to take a series of new hits when the US eventually returns to business.

The recent travel ban by the EU against the US is just a tip of the iceberg. Mexican border states have raised serious concerns about Americans’ pandemic inflows into the south.

Washington implemented strict inflow protocols against Mexicans in March. Yet, as the virus had its first peak in early spring and is now enjoying its second wave in the US, Americans continue to cross the border into Mexico.

What happens in the US-Mexican border today is just a prelude to what will ensue internationally as US containment failures are likely to be exported around the world.

The author is an internationally recognized strategist of the multipolar world and founder of Difference Group. He has served at the India, China and America Institute (USA), Shanghai Institutes for International Studies (China) and the EU Center (Singapore).

Special Reports
ADVERTISEMENT
61922
,
61927
,
The global impact of COVID-19 resurgence in US
Understanding stock markets during pandemic
Jaywalking fines necessary to break unsafe habits
'Comprehensive containment of China by US would only prove to be a historical mistake'
Celebrating diversity in our food supply
Interest and ardor ensure garbage-sorting success
International forum shows resolve to engage business
Striking a balance between liberty and regulation
Tackling plastic waste in time of pandemic
Striving to live a trusting and trusted life
EXPLORE SHINE