Shanghai's surprising answer to Martha Stewart and the gift of saying: 'Yes' 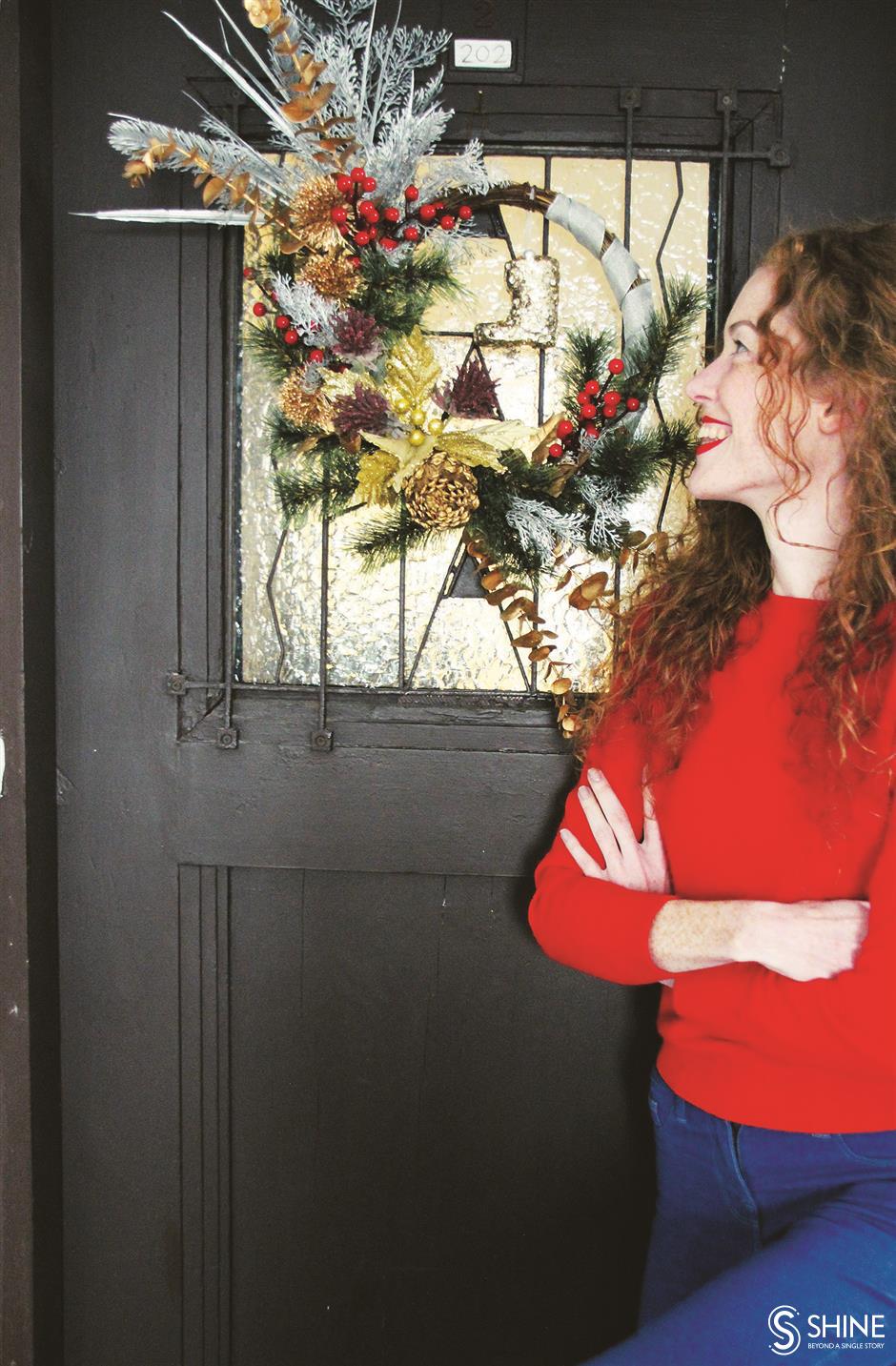 Christmas elfie: A homemade wreath and its proud owner

Confession: I regret most invitations I accept. Not after the fact, but in the run-up to it; morphing into a sleep-deprived toddler dragged to a luncheon. And it’s particularly tempting to keep your head down in a sprawling city like Shanghai. So much so, it’s precisely what I’ve done.

My husband and I moved here from Guangzhou in July. Shane went straight into a new job, whereas I had the luxury of time. We quickly fell in love with the city. Enjoying weekends wandering its tree-lined streets and spending copious amounts of money at Alimentari. Somewhat literally, we were buzzing. But during the week, Shane was away. And truth be told, it wasn’t easy. Let me call it for what it was: I was lonely.

Nurturing friendships and tending roots, only to dig them up and start afresh, comes with the expatriate territory. Despite the fragility of it all, we work hard to cultivate homes-from-home. Landing in Shanghai, I planned to join no end of clubs and classes. Basic foundations on which I’d build. But between the busyness of our move and season 4 of “The Crown,” that went out of the window. People reached out. I was invited to tai chi with Tom, afternoon tea with Christine, and Botox with Andy. But the further into my cave I crawled, the easier it was to stay there. I had a job in the pipeline and a vibrant city to explore. But instead of diving into the dreaminess of it all, I found myself lackluster, unsure and increasingly convinced that afternoon prosecco was a perk. I’d lost my buzz.

I was a trailing spouse. What I mistook for self-pity, is an experience many of our international community relate to. For the working partner, there are natural adjustments to everything new. But for a trailing spouse — defined as a person who follows their partner to another city for work — the difference can be dismantling. Aside from acclimatizing to an alien culture, there’s an undercurrent of self-questioning which can lead to boredom, low self-esteem and loneliness. A cycle that quickly spirals out of control.

And who when spiraling finds it easy to stop, take a breath and accept an invitation to dog-yoga?

I was lucky. Work would be a landing cushion. Aside from typical first-day nerves, I had a purpose. As a lifestyle columnist, I had no choice but to get dressed and get out there. What’s more, I wanted to; my buzz was back. A huge perk of my job is that I get to speak with you, our Shanghai community. It’s what I love and why I’m here. We’re blessed to live in a city bursting with classes, events, groups and organizations. Over the past 10 weeks, I’ve been lucky enough to meet a few. What I’ve learned is when it comes to what’s on offer, it’s not about what we do, but what we find while we’re doing it.

Monday was a case in point. Allie, community liaison at The Western International School of Shanghai, kindly invited me to an off-campus Christmas wreath making workshop. Crafting is neither an interest nor a forte. If it takes a village to raise a child, on this December morning it took a warm-hearted community to drag a cack-handed columnist from crafting virgin to Shanghai’s answer to Martha Stewart. And they did. There was Jaclyn, an angel with a glue gun. Wendy, whose euphemisms about my handiwork, left my cheeks sore from laughter. And Renee — annoyingly good at wreath making — who warmly greeted me at the finish line with a hug and a much-needed cup of coffee.

Wreath in tow, I climbed into a Didi on a fuzzy high that had nothing to do with glitter or crafting chord. What I felt was belonging. And while none of this is any great revelation, it is worth reiterating. Trailing spouse or not, there’s always a reason to stay comfortably within our caves. Be it family commitments, work deadlines, or Netflix.

The invitation we accept or group we join is mere packaging for the gift inside. Some gifts are soulless (socks), others are priceless; the very thing we need. It takes time to nurture friendships and tend roots, but it takes no time at all to plant them. Doing so brings us closer to home one “yes” at a time.

That, and the wreath’s not bad either.

Special Reports
ADVERTISEMENT
62417
,
How to tell opinion from fact: Do you live in a world of two realities?
Working with Chinese partners in animated films brings us together
The need for a Swiss army knife in the connected world
China's positive economic performance is good for all
Hosting WHO team shows support for origin-tracing
Tips on how to stick with your goals in the New Year
'Norms' of caste keep Americans divided, unable to work together
The kindness problem: an olive branch to shoddy waitresses everywhere
A vision of sustainable living in carbon-free cities
China's achievement in poverty alleviation seen in the eyes of a Zimbabwean student
EXPLORE SHINE