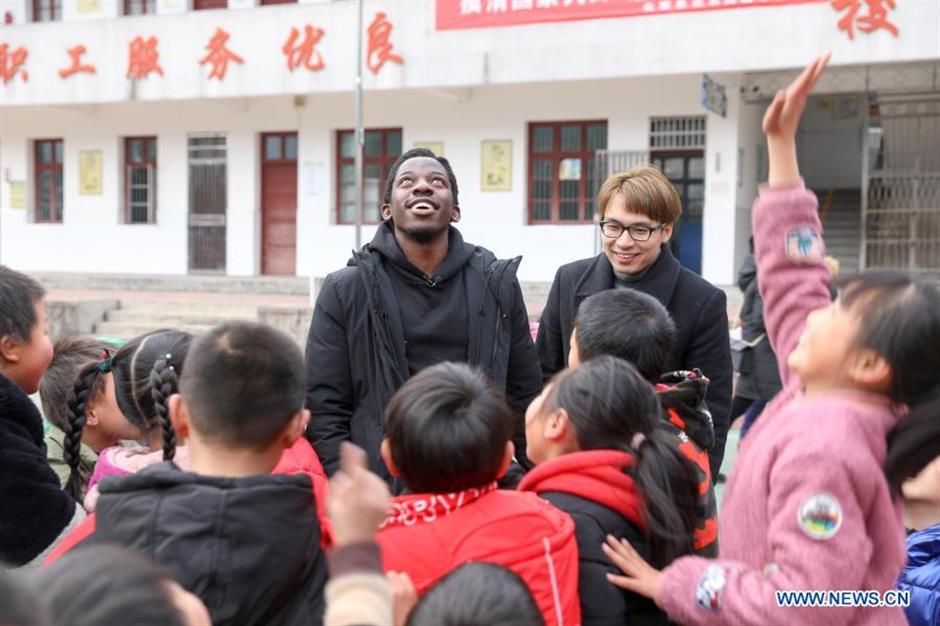 Albert Mhangami (first left in the back) of Zimbabwe, a master’s degree student at Tsinghua University, plays with students at Dawancun Primary School in Lu’an City, in Anhui Province, last December.

I am certain I will remember that building for as long as I live. It looked like a fortress, or more like a gem, a bright orange-yellow one, wooden beams neatly spaced underneath a roof of traditional dark grey tiles. Six ruby lanterns sat on golden tassels at its gate, crowning the elegant backdrop of grey and white buildings that had become a cultural trait of Anhui’s architectural landscape.

I am by no means an expert on poverty alleviation, but like many in my field of policy, I found it hard not to become deeply invested when I read the statistics and frameworks of China’s poverty alleviation strategy over the last two decades.

I would chant them like a prayer when speaking on panels or in everyday conversation. I would count them like beads, speak them out like hopes and dreams as the numbers increased with each passing year.

But as a policy scholar, it’s hard to see these numbers without seeing them as an intangible, distant possibility.

And then one day, those numbers were standing in front of me.

I was doing field research at Tsinghua University, my home and place of learning for two years. I had been sent with a small team of young scholars to Chongqing so that we could see the numbers for ourselves.

It was phenomenal, a feeling so simple yet so difficult to put into words that I left with more questions than I had the time or the language skills to ask.

So, when the university allowed me to join another small team to visit a village in Anhui, I was determined to interact more deeply with these numbers.

Our first stop was a classroom. After some games and laughs had allowed me access to the students’ unconditional openness, I was able to ask them a number of questions.

It started very basically: what they wanted to be when they grew up, what they liked about their school, and so on. But without warning, the team shifted gears and moved to more complex questions. I was surprised. It’s so easy to forget just how aware children are of the world around them, and it’s equally easy to take for granted how skilled journalists are at asking the right questions.

“Have you noticed any changes in the village?” I almost couldn’t keep up with them after that. The children covered everything from the physical infrastructure of the entire village to their subsidized meals at school.

Two moments really struck me more than I thought they would. I couldn’t think of the words for medical insurance when a boy with his arm in a sling entered the conversation. With the help of a translator, I tried not to overreact when he detailed how the cost of an injury he had sustained while playing had been shared with the government. He knew shocking amounts of detail and for good reason.

Subsidies and insurance were guardians of the millions of jobs and assets the government had created for the people. A costly and unplanned trip to the hospital anywhere in the world can strip aid, micro-financing, and all sorts of other projects of their roles in poverty alleviation, so this little boy’s experience really meant more than he could ever know.

The second moment was when another boy almost floored me when he said, “I want to study abroad.”

I remember talking with a member of the team about this boy’s statement for the entire car journey to our next site.

Poverty is ultimately about options. A child who only five years previously would have seen the provincial capital as a goal was speaking of the international community as a space for his dreams — poverty was truly being alleviated.

A woman came and gave me a handshake as I left the car. Her hands were like my mother’s: warm, gentle, and yet hard from years of difficult work.

Her husband had died early. She sold a few things from a small room to help herself and her son, but it wasn’t ever enough. I could hear it in her voice, the feeling of working past your limits and that just not being enough, not even enough for a decent life.

She pointed to the beautiful building in front of us. Bright wooden beams covered the entire structure. It was part of the village’s tourism infrastructure, built by the government. And here is where the intersection of all the complexities of poverty really becomes apparent.

The village excelled at two things: producing its three main agriculture products and relating its significant history. Agriculture taxes that burdened farmers had been removed, key products had been subsidized so they didn’t have to compete with other provinces, and infrastructure (physical, logistical and digital) connecting the rural population to the massive national supply chain had been provided.

The infrastructure was created by buying houses from residents in extreme poverty at high prices, building better-quality new homes to match the new industrial infrastructure and then selling these new homes at cheap prices with additional subsidies.

This meant that not only were the villagers receiving higher-value assets in the form of new homes (greatly improving their financial security), but they were also leaving the exchange with a net profit as the amount they were paid for their old homes ended up being greater than the amount they had to pay for their new ones.

Homes that were not used for industrial infrastructure were used for tourism infrastructure. The rich history of the village fit well with its new story of poverty alleviation, drawing in tourists from all over the country. The influx of tourists resulted in more income and the creation of jobs.

The woman with my mother’s hands was a recipient of one of those jobs. She is a cleaner, earning a salary by preserving the standard and beauty of the new community she is a part of. As we walked and talked, to my horror the translators abandoned me, and I was stuck trying to put into words the map of questions in my heart.

“My son is happy and has a girlfriend.” We laughed as I asked her if her son was handsome, working hard, and living a good life. Her answer felt so light, clearly unburdened by the massive weight of intergenerational poverty. I heard a similar laugh the next day when I waved excitedly at a sweet store owner I had met after that conversation.

She invited me to sit with her and heat up my hands near the fire. With the cameras off we laughed about her unageing skin and how the massive quantities of chestnuts I had bought from her were just as much a gift to me as they were to her. But a simple question from one of the reporters revealed the complexity of her life. Her father was deaf and dependent on her salary as well as her husband’s. But the social infrastructure had relieved three generations of the unbearable burden that poverty truly carries, just as it had for the woman I met before, and as it had for the other people I would meet later.

We all knew the real sting of poverty was that it was inherited. It was not that it impacted your own life, but that it made your presence a stain on everyone you love, that it doomed anyone who depended on you. It was a stain that reached so far down your bloodline that you would never even be able to see the children whose lives were impacted by their association with yours.

She laughed with a familiar lightness when we asked her about her plans for the new year. It was a laugh similar to that of an old man whose business was doing so well that I spent most of our interview telling him it was okay to answer his phone and address his customers and friends. It was a laugh that was shared by the people of that village, by the hundreds of millions of people that had been pulled out of poverty. It was a laugh that showed confidence in a government that had prioritized the people in the global battle against poverty, a battle that is too often turned into a fight of economic interests versus poverty, instead of what it truly is: a fight of the people versus poverty.

Albert Mhangami, from Zimbabwe, is a master’s degree student in the School of Social Sciences at Tsinghua University.

﻿
Special Reports
﻿
China's achievement in poverty alleviation seen in the eyes of a Zimbabwean student
Collective action needed to meet climate challenge
Stakeholders should join hands to make business responsible
Dry January, I'll drink to that: a positive piece about alcohol
Resolutions without remorse: a revealing conversation with Shanghai's dream coach
Small bridges for dialogue and cooperation
No Second Fiddle: Celebrating Shanghai's lesser-known gems
'Mulan,' Nanjing Road and smashing poverty: a non-COVID look back at 2020
Christmas under COVID-19: How to celebrate and why you should
It's officially winter, but don't expect a white Christmas
EXPLORE SHINE