How to tell opinion from fact: Do you live in a world of two realities? 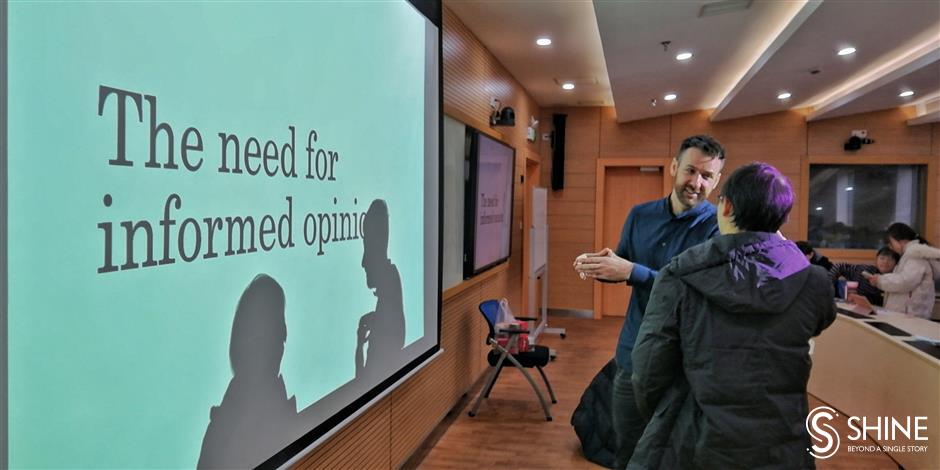 Andy chats with a dean from the journalism school on a break during his lecture.

I recently had the unique honor of returning to my university, Fudan University, as a guest lecturer, to talk about opinion and fact in news media and how to tell the two apart. It should seem obvious, but for many it’s really not, especially in places where opinion is nefariously put across as fact on a frequent basis.

I’m talking mainly about the United States of America here, a place where news media has been split down party lines for a while now, but where that divide has recently become so pronounced that it’s fair to say there are two realities existing precariously side by side.

During my class at School of Journalism, Fudan University, I quizzed the students using 10 statements which they had to decide were either opinion or fact. I suggest you take the quiz now (bottom of this page) before you read on, and find out if you’re apt at spotting the difference yourself.

This is possibly because, according to a recent report by the RAND Corporation — a non-profit, non-partisan think-tank based on Los Angeles — “US-based journalism has gradually shifted away from objective news and offers more opinion-based content that appeals to emotion and relies heavily on argumentation and advocacy.”

Their study looked at US news reporting over a 28-year period (1989-2017) and found that “journalism in the US has become more subjective and consists less of the detailed event or context-based reporting that used to characterize news coverage,” according to Jennifer Kavanagh, a senior political scientist and lead author of the report.

This will probably come as a surprise to no one, or at least no one outside the United States where subjective and emotive reporting has clearly hampered the population’s ability to separate fact and opinion and deal with each with a healthy amount of skepticism.

So, what is opinion?

As an opinion writer myself, you’ll often see those kinds of words here in my column, but since my weekly rants are clearly not news reports, you know to take whatever I say just as an opinion and form your own opinion if you so desire.

Here’s an example of an opinion-based statement: “Wes Anderson is an amazing filmmaker.” There’s no way of proving that statement as fact, because it’s subjective.

Fact is an objective statement or account of something real which can be proven. Factual accounts should not include adjectives like amazing, perfect, unbeatable, dreadful, grotesque or embarrassing. Here’s an example: “Wes Anderson won the Silver Bear for Best Director in 2018.”

Sound easy? Well, it really is, apart from the fact that news media in the United States often purposefully or subconsciously mix opinion and fact, effectively blurring the line between the two so much that now many Americans can’t tell the difference.

Here’s a quick example using a headline: “Impressive crowd of 10,000 turn out for march.” Can you see the adjective in that headline? The word “impressive” is the writer’s own opinion mixed in with a factual statement about the number of people who turned out for a march. By using that adjective, the writer is pushing you to see the march as a success and to feel that the cause behind the march has a lot of public support. That isn’t necessarily the case, and similarly a writer with another opinion could pen this headline: “Only 10,000 turn out for march.” See the difference?

I hope this short foray into a tiny aspect of news media has helped a little and that now you’re just a little bit more apt at separating fact from, well, fiction. In today’s world, that skill is more important than ever.

Can you tell opinion from fact?

1. Health care costs per person in the US are the highest in the devel- oped world.

2. Democracy is the greatest form of government.

3. Increasing the federal minimum wage to US$15 an hour is essential for the health of the US economy.

4. Immigrants who are in the US illegally are a very big problem for the country today.

6. President Barack Obama was born in the United States.

7. Immigrants who are in the US illegally have some rights under the Constitution.

8. ISIS lost a significant portion of its territory in Iraq and Syria in 2017.

9. Abortion should be legal in most cases.

10. Spending on social security, medicare, and medicaid make up the largest portion of the US federal budget.

﻿
Special Reports
﻿
How to tell opinion from fact: Do you live in a world of two realities?
Working with Chinese partners in animated films brings us together
The need for a Swiss army knife in the connected world
China's positive economic performance is good for all
Hosting WHO team shows support for origin-tracing
Tips on how to stick with your goals in the New Year
'Norms' of caste keep Americans divided, unable to work together
The kindness problem: an olive branch to shoddy waitresses everywhere
A vision of sustainable living in carbon-free cities
China's achievement in poverty alleviation seen in the eyes of a Zimbabwean student
EXPLORE SHINE