Here comes the sun ... and it's all right

Disco melodies mixed with bird chirpings as an old woman pedaled a fitness bike fixed on a riverside grassland. There was no portable loudspeaker in sight as I drew near to her, attracted by the dynamic scene. It was a sunny day last week when my wife and I took a stroll along an ancient river in a neighboring city north to Shanghai in Jiangsu Province.

“You have a pocket music player with you?” I asked, curiously looking for the source of music. She was sitting on the exercise bike fixed by a vertical steel pillar covered by a big sunshade umbrella.

“Ah, yes,” I said. “But there are no buttons on the pillar. How did you turn it on for music?”

“No need for buttons,” she said patiently. “Put your feet on the pedals, push them back and forth, and the pillar will start to play music.”

It was a scene different from other outdoor exercises I had ever seen, where people would often bring portable or pocket audio devices powered by batteries.

Amazed by the "singing" fitness bike on which the woman exercised leisurely, I decided to examine it again. I took several steps back from the bike so that I could see it “from toe to head.” As I raised my head and squinted my eyes against the sunshine, I suddenly spotted a square photovoltaic panel atop the umbrella. It was all clear now: The music was solar-powered. I swiftly stepped onto another bike and tried my luck. Music flowed in the air a few seconds after I began to pedal. I tried some other types of fitness facilities as well, like a “rowboat” and a swinging board. In every case music came flowing out as a result of my body movement. 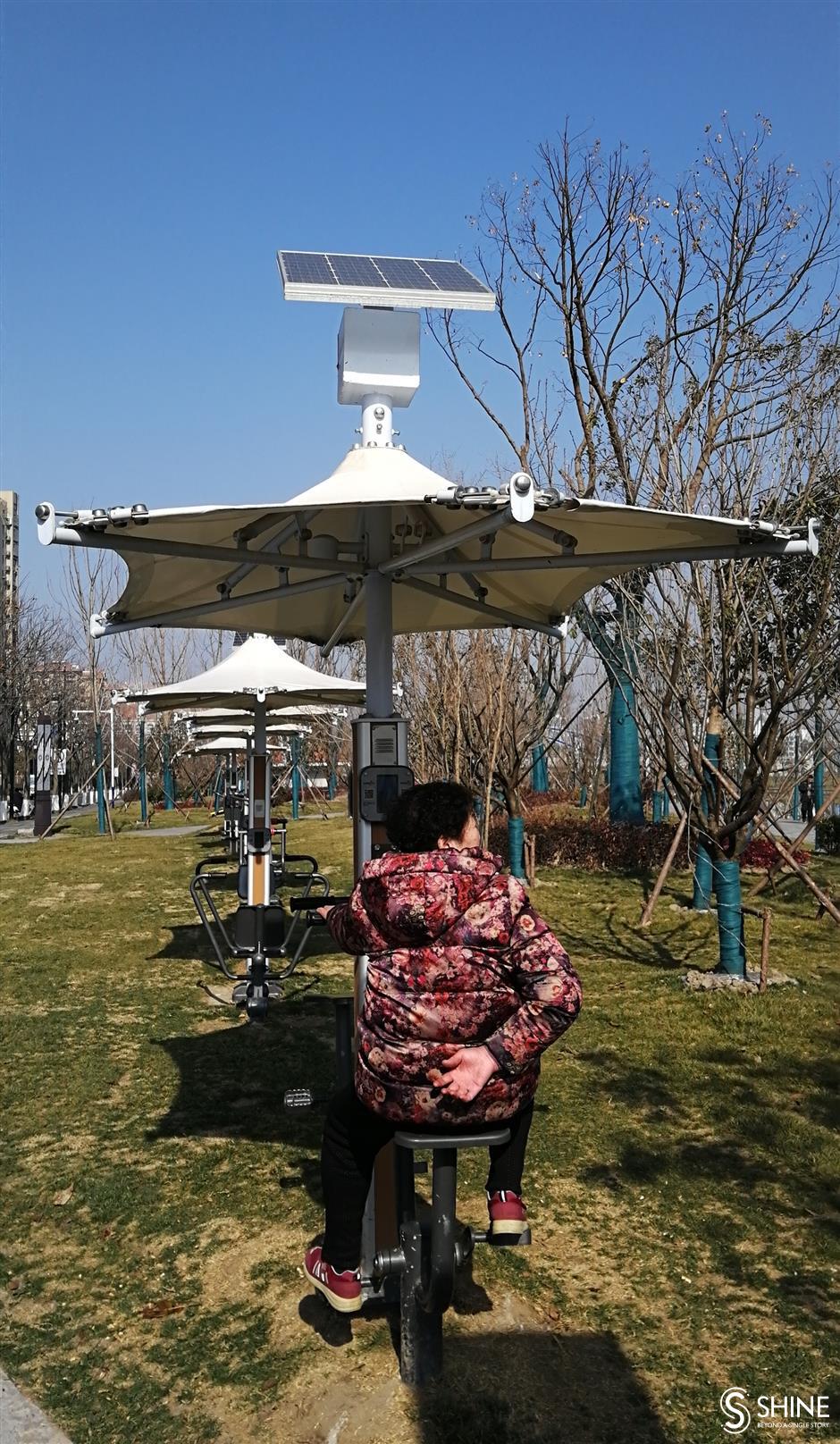 An old lady pedals a solar-powered exercise bike at a riverside park in Yancheng, Jiangsu Province.

Solar power conducted with photovoltaic technology had been talk of the day worldwide for quite some time, but I rarely felt it was so close to and convenient for our daily lives before I came across the riverside bike. There are many ways to harness solar power, and photovoltaic panels are certainly one of the most efficient, because they turn solar power directly into electricity.

The solar-powered fitness facilities, which provide "endless" music while shading an outdoor exerciser from sun or rain, promises big potential in China’s domestic market as public awareness of health increases. In particular, there has been a pent-up demand for outdoor exercises, as they help prevent cross-contagion of COVID-19.

Imagine we plant more riverside esplanades with such solar-powered exercise equipment. Combined, they will improve the health of more and more people, while helping to reduce carbon footprints associated with power generation from fossil fuel.

Earlier this month, the China Photovoltaic Industry Association predicted that China’s average annual installed capacity of solar photovoltaic power generation will further expand by 70GW to 90GW during the country’s 14th Five-Year Plan period (2021-2025). According to the association, photovoltaic technology can be amply applied to such end users as buildings, high-speed railways and agriculture, with a huge combined consumption potential.

Take Shanghai for example. Late last year, Songjiang Stadium began to generate power with its rooftop photovoltaic panels. It was the first of its kind in Shanghai. Chongming District, an island unto itself, has also begun to construct a massive photovoltaic power base that covers more than 3,180 mu (212 hectares) and boasts an installed capacity of 110MW. Moreover, certain sections of the city’s subway system have started to generate power with photovoltaic technology, making local transportation ever “greener.”

If you are interested, you, as an ordinary citizen, may also apply to install photovoltaic panels on your roof. In Songjiang District, for example, more than 2,600 households have successfully applied to install photovoltaic panels on their roofs to meet their daily needs for electricity. If they have surplus electricity, they can sell it to the city’s power grid for a profit.

It's said that there's nothing new under the sun. It depends on what you look at. If you look at what China and some other countries have done to reduce mankind's carbon footprint, you know they are onto something new and meaningful — both to man and nature.

﻿
Special Reports
ADVERTISEMENT
Here comes the sun ... and it's all right
Commit fully to sustained multilateral cooperation
Steer China-US ties back to the right course
Spring Festival: a chat about family, food and holiday hang-ups
Weird and wonderful things from Taobao for 20 yuan or less each
China's laudable achievement in poverty reduction
America, it's not you, it's me. Or maybe it is you
China fast in action to build global safety net in pandemic fight
Physical stores' surprising comeback in the pandemic
Moving together toward a multilateral world
EXPLORE SHINE