On New York’s Wall Street is the well-known “Charging Bull” sculpture, a symbol of the financial district that celebrates the “strength and determination” of the American people. It is a tourist draw and symbol of Wall Street power.

Similarly in Shanghai, on the iconic Bund, the throngs of domestic and overseas tourists today are also attracted to a bronze bull vividly crafted and full of vitality.

Many stop to admire, take pictures, or touch the horns in an auspicious move suggesting one’s good fortune would charge forward, just like the bull.

Arturo Di Modica was the man behind both sculptures.

His death on February 19 plunged his hometown of Vittoria in Italy into deep grief.

At the funeral, a host of Italian cultural figures, artists and statesmen paid their respects to this master sculptor.

An official from Vittoria delivered a memorial speech written by me, which testified to our contacts and his feelings for Shanghai.

In 2009, the Year of the Ox in the Chinese calendar, in anticipation of the World Expo 2010 Shanghai, the Bund at the eastern end of Fuzhou Road was named the Bund Financial Center, as a token of the city’s long history as a financial center.

Urban landscaping experts and residents proposed that, in light of the practice in major international financial hubs, an icon was needed for the city as a financial hub.

After much discussion it was agreed that a bull should be erected that could match the Wall Street version, to give full play to the city’s ambition to become a financial hub of international stature.

Soon I received a call from a city leader asking me to try my best to invite Di Modica, creator of the Wall Street bull, to work on the Shanghai version.

After making many trips from Sicily to North America, I got to meet this world-class artist in New York.

I was snubbed at the very beginning, though — Di Modica said he was working on a pair of 120-foot-tall （3-meter-tall) bronze horses — “The Horses of the Ippari” — which he hoped would be placed on the Ippari river in his hometown. This would prevent him from making any trip to China before March 2010.

Undaunted, I tried to persuade him by quoting the Chinese saying “seeing is believing,” with the message that given China’s rapid economic growth and the completion of the Bund renovations expected before the 2010 Expo, the creation of a bronze bull on the Bund would be a prelude to the Expo and a rare chance to showcase Shanghai to the rest of the world.

Ultimately the expectation and sincerity on the part of Shanghai brought him round and he agreed to sculpt a bronze bull for the city.

On March 21, 2009, I escorted Di Modica on his first trip to China. On his arrival in Shanghai, he was stunned by this mesmerizing Oriental pearl. As the inspection deepened, he gained a keen interest in this country where tradition goes side by side with modernity. In the process of sculpting the bull, the artist would sometimes demonstrate the curiosity more proper to children, by asking me repeatedly: “What’s the favorite color for Chinese?” or “What exactly does reserve mean in Chinese culture?”

Sometimes, in his feverish pursuit of perfection, he would give up the original plan multiple times. In our communication, I had to explain to him how red had come to feature so prominently in Chinese history, the century-old ordeal for the Chinese people, the choice of our own unique path of development, and our indomitable spirit, until one day Di Modica told me excitedly that he seemed to have attained enlightenment regarding the cultural differences between the East and the West. 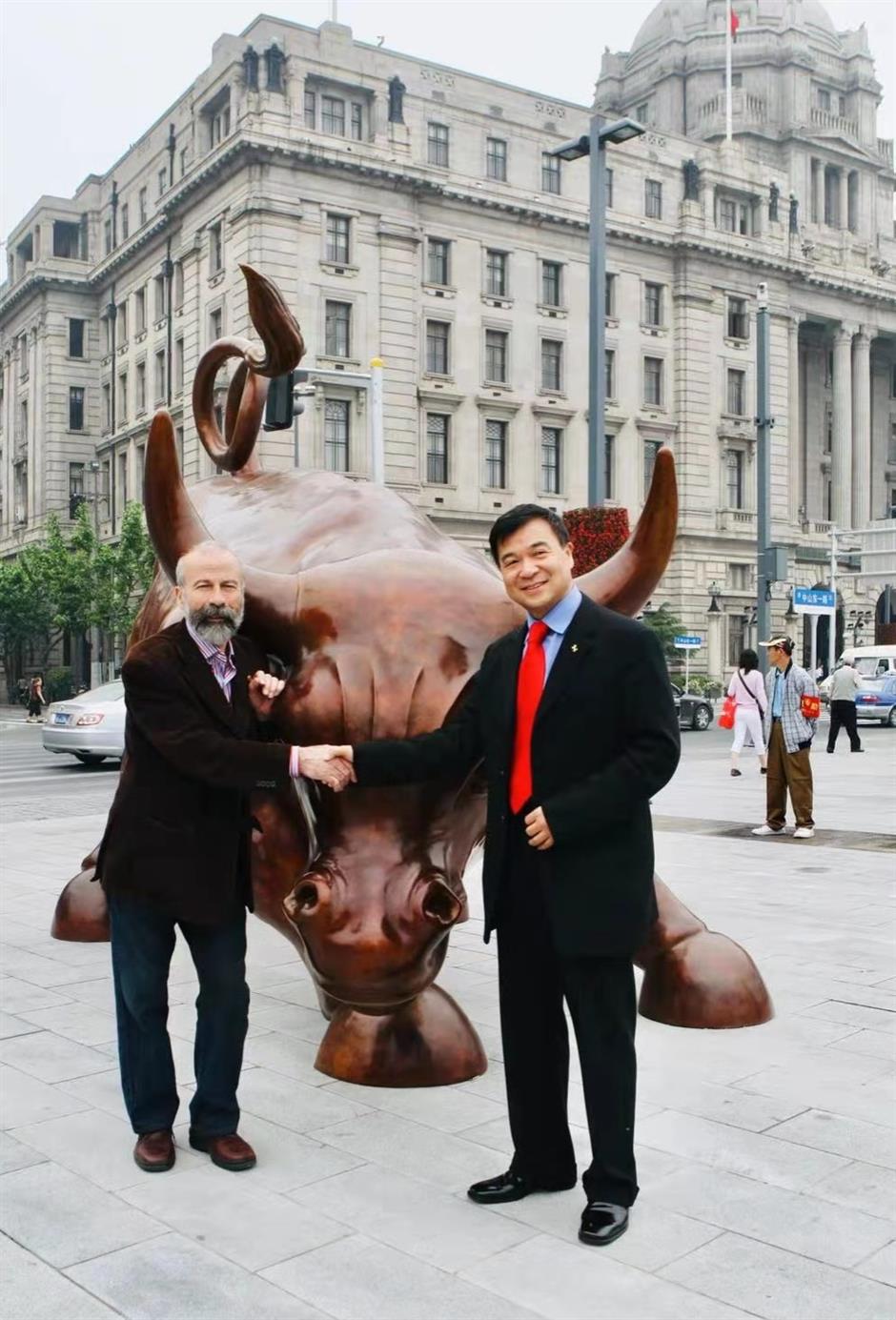 In this file photo, Giuseppe Zhu (right) poses with Italian artist Arturo Di Modica in front of the “Charging Bull” sculpture on the Bund in Shanghai.

With no small pride he would propound that while the head of the Charging Bull on Wall Street turns to the left, the Bund version would turn to the right. Yet, in spite of this difference, both are symbols of strength and determination.

He also explained that while the tail of the Wall Street bull curls more gently, the Bund version appeared to turn upward, prophesying China’s inevitable rise in spite of the vicissitudes it has experienced. On that occasion, I was left speechless, awed by his ingenuity clearly attributable to artistic inspiration.

Ultimately, thanks to the collaborative effort of the around 40-member team in Wyoming, the US, the Bund bull was shipped to Shanghai on the eve of the opening ceremony of the 2010 Expo, as a gift to the Chinese people.

Weighing 2,500 kilograms, measuring 5.2 meters in length and 3.2 meters in height, the muscular bull has been strongly delineated.

The bronze bull has rounded eyes and a tail pointing skyward in a spiral, denoting a vigorous sweep with its strong legs.

On May 15, 2010, at the launch ceremony, Di Modica told the hundreds of guests and media present: “Out of my heartfelt love for the Chinese and Shanghai people, I have crafted this Bund Financial Bull, in my belief that this work, imbued with my fondest wishes, would bring good luck to China and Shanghai.”

Through my contacts with Di Modica, from New York to his hometown, we developed a strong friendship. Obviously, his work goes beyond this product for the Bund Financial Center. There is a stronger message: This is a work for the Chinese people.

To this day, his remarks resonated with me. He initiated me into the creativity of Italian artists, the warmth of Sicilians and his friendship for the Chinese people. He was a real artist, for his work has attained an intensity, depth and essence only possible with true artists.

In an obituary issued by the city of Vittoria, it is said that it had lost a distinguished resident, an intelligent artist with foresight, who had added significantly to the international prestige of the city with his remarkable ability and initiatives. His amiability and delicacy have left an indelible footprint in the modern art and cultural spheres. Vittoria will long remember him and would make his work known to more people.

It is my sincere belief that, over the past 12 years, the Bund Financial Bull has testified to Shanghai’s innovative development and our cooperative friendship. I feel greatly honored to have made his acquaintance, and am grateful for his consent to make this well-known work for Shanghai.

Di Modica has passed away, but he will be long remembered by the people. It is hoped that his stories will continue to be told, giving people inspiration and hope.

(Giuseppe Zhu is president of the China-Italy Association of Shanghai. The story is translated from Chinese by Wan Lixin.)

Special Reports
ADVERTISEMENT
Bund bull testament to artist's love of China
Mother tongue: Why your language matters
Here comes the sun ... and it's all right
Commit fully to sustained multilateral cooperation
Steer China-US ties back to the right course
Spring Festival: a chat about family, food and holiday hang-ups
Weird and wonderful things from Taobao for 20 yuan or less each
China's laudable achievement in poverty reduction
America, it's not you, it's me. Or maybe it is you
China fast in action to build global safety net in pandemic fight
EXPLORE SHINE