Living like a local: the German artist and her century-old traditional Shanghai home

Ask most foreigners based in Shanghai where they’d most like to live in the city and you’ll inevitably hear one answer again and again: the former French Concession. I’m not saying it’s not a beautiful place. It’s just that, like many places in this huge city, it’s a bit too “foreign” for my liking.

And it has a long history as an area for foreigners, as you probably guessed by the name. On April 6, 1849, the French consul of the time took over the area and put it under French control. It wasn’t until World War II that French nationals agreed to return the area to the Chinese.

Some foreigners, though, prefer to live in a more “local” setting, establishing a home in communities not traditionally popular with expats.

One such person is Yolanda vom Hagen, a German national who has lived in Shanghai’s Xuhui District for a decade. She’s spent that entire time in one place, a traditional lane-style home dating back to the 1920s. Sure, the compound was inspired by French architecture, but that’s where the “foreign” ends. 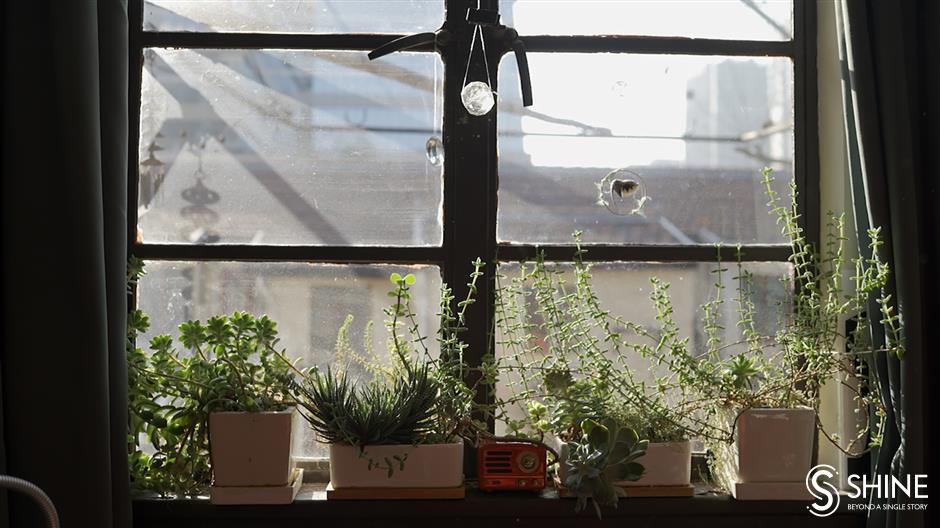 Yolanda's succulents love the morning sun as much as she does.

“I like the connectedness to the Chinese culture in this compound,” she told me. She’s also the only foreigner there.

Even though her home — up two creaky flights of stairs — occupies the entire third floor, it makes up only about 30 square meters. She’s made clever use of all that space, with a small kitchen perched halfway up the stairs to her abode, and a large, main room where furniture has been placed in such a way that it is effectively sectioned into four “rooms.”

When you first walk in, you enter what Yolanda calls her dining area, with an old, wooden table and set of chairs, adorned with her prized collection of teas.

Before the large windows to the front of the room is a long, wooden desk that transforms that area into her office (Yolanda works from home).

To the right of her office is the “library,” featuring a custom-made bookshelf created to fill in the space where a chimney used to be. 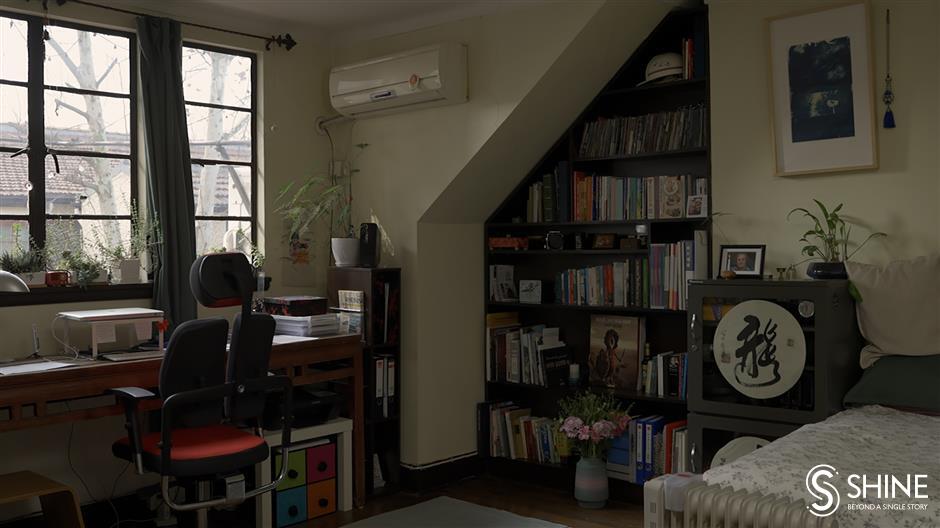 A custom bookshelf fills a void left by the removal of an old fireplace.

And finally, as you walk back toward the door, you come across her bedroom, a comfy space where she often sits to have a cup of tea and bask in the morning sun.

Yolanda is a photographer and authenticity coach, working from home every day of the week. “As an authenticity coach I help people to become observers and find new perspectives, to see their unfiltered reality, and to choose new angles to create the desired image for their life.”

And she has done exactly that with her home, retaining traditional Shanghai touches and mixing in her own character and charm, molding it into a warm and homely oasis.

Yolanda says she’s thankful to have found such an ideal home here, and is reminded just how lucky she is every day the sun comes up.

Finding this place “really gave me a home. And this is my home, yeah.”

If you'd like your Shanghai home to feature in an upcoming episode of "Home Sweet Shanghai," you can e-mail Andy at andy.boreham@shanghaidaily.com.

﻿
Special Reports
﻿
Living like a local: the German artist and her century-old traditional Shanghai home
'State's children' a model of national unity
Simple tips for leading a quality and low-carbon life
Top Chinese women managers at home and abroad describe their paths to success
Online meeting of COVID-19 experts shows likely slow return to normalcy
Mentally ill columnist on media rampage!
Why the world keeps close eye on China's 'two sessions'
Come with me for a stroll along my favorite part of Shanghai's Suzhou Creek
Rising about self-interest to help others
Bund bull testament to artist's love of China
EXPLORE SHINE