Get over yourself and say 'yes' to pleasure

I hereby call an end to guilty pleasures.

Not the pleasures themselves, of course; crisp sandwiches, an M. Night Shyamalan plot-twist, or pugs. No, I mean the growing onset of guilt. That gnawing consciousness any true expression of enjoyment might undermine our reputation, intellect, sex appeal, or seeming ability to tie our own shoelaces.

In a world that’s in a billion ways of crisis, we’ve enough to worry about without feeling ashamed to have watched (and quite liked) “Love is Blind” over the weekend.

A guilty pleasure is something we enjoy, but would be embarrassed by if other people found out about it. Snobs coined the phrase as a form of social hierarchy. “Bad taste” was a way of identifying “bad people.” So the rift between high and low culture is nothing new; even Shakespeare’s first critical mention played up his lack of formal education. But when we’re all one WeChat moment away from being canceled, is snobbism getting worse?

Everyone has guilty pleasures — a hobby, food, music genre or movie they can’t get enough of. Mine? Grammy award-winning singer songwriter and 80s hair icon, Michael Bolton. Society deems this love affair unlawful, but Michael makes me happy. And while the secret of our social disobedience might be thrilling at first — like stealing toiletries from a hotel — denying our truth has consequences.

When we put the opinions of others before our own, we perpetuate feelings of shame. On the flip side, committing ourselves wholeheartedly to the things we love builds confidence in who we are and what we want out of life. No matter the niche, there’s almost certainly a crowd of like-minded people. Community helps us find validation and meaningful relationships we might otherwise miss. Pleasure helps us unwind; it’s a release valve for tension, stress and the burdens of everyday life. As research shows, when we create space for joy, it pays dividends toward our mental well-being.

“Trashy TV? I’m your lady!” An enthusiastic response from my friend Christine, head of primary at Dulwich College, Puxi. “My guilty pleasures are ‘Gogglebox’ and ‘Line of Duty,’” she adds. “If it’s a choice between a glass of wine or easy television, it’s the latter every time — it helps me relax.” Andrew, who’s lived in Shanghai for nine years, unwinds with junk news. “It starts with something fairly respectable,” he claims, “but ends much later with me reading an expose on Justin Bieber’s mom.” 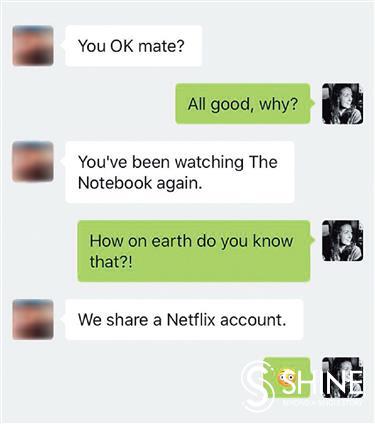 Caught in the act: Denying our truth has consequences.

We needn’t like or take an interest in everything all of the time. I don’t. There are plenty of reasons to not click with something, but its appearance on the Billboard Top 100 shouldn’t be one of them. When did popular become synonymous with bad? Some of the most influential artists of all time — for example, The Beatles — have been chart-toppers. This point isn’t to brush off the hoards of artists not being commissioned or getting the credit they deserve. But instead to acknowledge they can coexist with the mainstream’s talent.

I think we should all get over ourselves. It’s easy to rave about your love of Li-Ming or French New Wave Cinema: It takes balls to love Bolton. Don’t trust anyone that tells you their guilty pleasure is Fleetwood Mac: They’re a liar, and in Roman times would have been thrown 80-feet from Tarpeian Rock. If you can’t be honest about your favorite Disney character, what else are you keeping from us?

Indulging in popular culture doesn’t make you tasteless. There’s no special place in Hell for people that read Dan Brown. Let’s be honest; an endless stream of thought-provoking stuff sounds exhausting. It’s not necessary — or healthy — to be perpetually stimulated by philosophical and brooding content.

I’m done feeling bad about feeling good. I will continue to gratify my inner superficiality without mercy, and I urge you do the same. If something makes you happy, it’s probably awesome.

Unless your guilty pleasure is Madonna’s version of “American Pie.” At which point, I’m not sure what to tell you.

Special Reports
ADVERTISEMENT
62417
,
New thinking needed in tackling our water issues
Green markets are not enough to save us from crisis
Shanghai, let's make sleep our superpower
What?! Is buying a cat in Shanghai really that expensive?!
Communication is at the roots of understanding
Double standards of Western 'preachers' and the nefarious intentions behind them
Get over yourself and say 'yes' to pleasure
Living like a local: the German artist and her century-old traditional Shanghai home
'State's children' a model of national unity
Simple tips for leading a quality and low-carbon life
EXPLORE SHINE