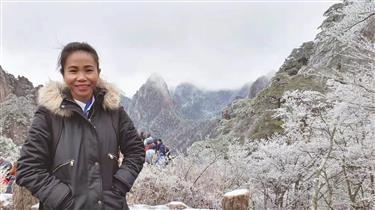 This year marks the 60th anniversary of the establishment of China-Laos diplomatic relations, since April 25, 1961.

Over the past six decades, the friendship between the two countries has become stronger, especially in trade and investment.

In a sense, my own experience testifies to the profundity of this relationship.

Thanks to a scholarship provided by China, I came to China in 2017 to pursue my master’s degree in International Trade.

Now China ranks first in foreign direct investment in Laos. During the last ten years trade volume between Laos and China rose from US$237 million in 2005 to over US$2.7 billion in 2018.

China’s investment in infrastructure has been what my country needs badly. Partly as a result, roads, schools and hospitals there have improved a lot.

Once this project is operational, I am quite sure that it will create a lot of jobs for the local people. It will also boost Laos tourism. In 2018 alone more than 800,000 tourists came from China, an increase of 26 percent compared to 2017.

China is not only the largest investor and trade partner for Laos, but also the largest aid provider.

As we all know, China has set a good example in its fight against poverty.

Its successful poverty alleviation effort not only improves the life of the Chinese people, but also brings hope to the people in many developing countries.

It is against this backdrop that China helped launch a rural poverty reduction project in Laos, which aimed to provide electricity, water, health and digital TVs to around 400 families across the country. I believe that this type of cooperation will definitely contribute to Laos in its fight against poverty that will help lift Laos from the Least Developed Country status by 2026.

Hence, I am very grateful that the Lao people in remote areas will soon have access to electricity and water supply.

Earlier it also sent medical experts, along with medical materials, to Laos to help fight COVID-19. Recently, I also heard that China has been providing vaccines to many other countries in the world, which is really a noble deed.

My life as a student in China in general and in Shanghai University in particular has been very well. The safety and warmth I have experienced in China made me feel China is my second home.

It is only natural that I want to continue to pursue a PhD in China. I believe that further studies will enrich my knowledge in the field of economy and trade.

I am keen to use my knowledge to promote trade and cooperation between my country Laos and China.

The author is a MA student from Laos at Shanghai University. The views are her own,

Special Reports
﻿
A Lao student's views on Sino-Laos friendship
The US original sin of exporting turmoil
First quarter data instill confidence in China's new economic stage
Bright lights, big benefits: Six ways Shanghai is good for us
From spaces to places: How Shanghai's local entrepreneurs make our city a home
One Day One Job: a day in the life of a Shanghai firefighter
Will brands think twice about cancel culture after H&M cotton debacle?
Speak for yourself. Don't let emoji say more than you do
Four decades in China: The Turkish man and his treasured belongings
New thinking needed in tackling our water issues
EXPLORE SHINE