Over the past couple weeks, like many, several of my colleagues have been keeping close tabs on the wandering Asian elephants in southwest Yunnan Province.

One observed that "my nightshift colleagues tell me almost every night where they are."

To the uninitiated, the daily update on the elephants' ambulation might appear a bit boring.

The bulletin for June 20, for instance, reads like this:

Between 6pm, June 19 to 6pm, June 20, all the 15 wild Asian elephants on the move were closely monitored, with all the animals and human beings found to be safe and sound, as the herd continuously moves back and forth in an area about 280 meters in diameter in the city of Yuxi's Dalongtan Town. The lone male elephant that strayed about two weeks ago is 24.3 kilometers away from the main herd.

Thanks to coordinated efforts between local governments, a total of 144 emergency personnel and police have been deployed, as well as 139 dump trucks, 22 bulldozers, 70 emergency vehicles and 13 drones capable of real-time surveillance. More than 3,400 people from 1,329 households have been relocated, and 1 ton of food has been handed out.

If you have been following the trekking elephants over the past few weeks, you can read a lot more into these facts and figures.

For one thing, the information is a testament to the meticulous efforts local governments have made to ensure safe passage for the migrating mammals.

Since the elephants left their original habitat in March 2020, they have traveled 500 kilometers across half of Yunnan, and ensuring their safety involves the coordination of various government agencies. 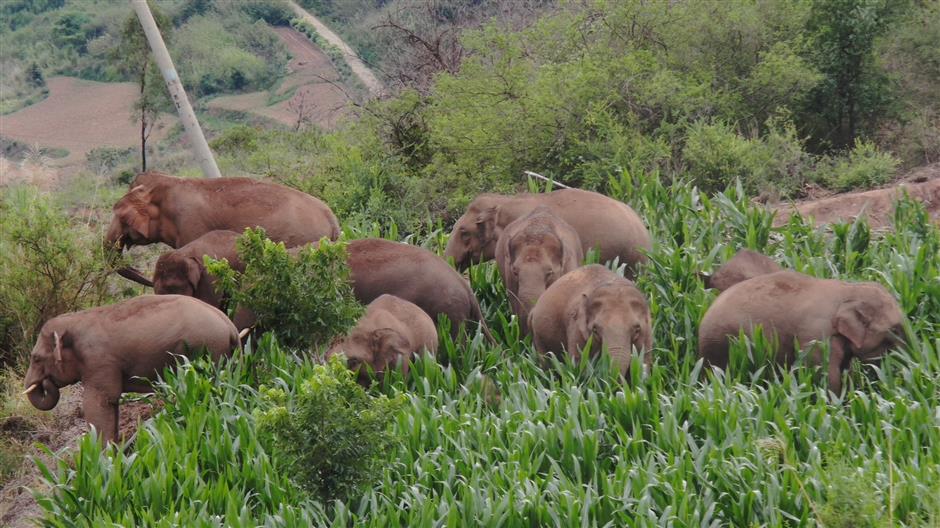 The herd of wandering Asian elephants lingers on June 20 in the city of Yuxi in southwest China's Yunnan Province.

To divert the elephants from densely populated towns and cities, local people have erected barriers in some places and installed electronic fences in others. To ensure the fences are safe, workers initially tested them on themselves.

Most of the time people resort to more subtle tactics, such as leaving trucks of maize and pineapples in select locations to lead the animals to less-inhabited areas.

Drones are necessary for observing the elephants, but to minimize their impact on the animals they are flown at altitudes of at least 100 meters.

In a certain sense, all these facts and figures speak volumes for the heightened ecological awareness and capacities of local governments and people.

In a dramatic way, the elephants' tour is educational, offering researchers and residents alike an intimate glimpse of their behavioral patterns.

Promoting an ecological civilization has always been high on the government's agenda.

Since 1958 when the country set up one of its earliest national nature reserves in Xishuangbanna to protect elephants, more than 10 new reserves have been created, covering 4,253 square kilometers.

The effectiveness of these efforts can be seen in their dietary changes.

The elephants used to feed on sugar cane and maize, which are being replaced by pineapples and dragon fruits planted by local farmers. The change suggests the elephant-human relationship may be positive.

Thanks to protective measures, over the past three decades the number of wild Asian elephants in Yunnan has doubled from 150 to 300. During the 1990s, they were primarily found in 14 towns, but this number has grown to 55.

The gradual expansion of the species over a larger area, while a sign of improving ecology, also fuels the need for more food, which increases instances of encroachment on farmers' plants.

Local governments are studying how to compensate farmers who have suffered losses as a result of the migrating pachyderms.

It is encouraging to know that as the giants continue their tour, they would be noted by more people, with a strong ecological message about people and elephants living in harmony.