Scapegoating to fail in a world trusting science and justice 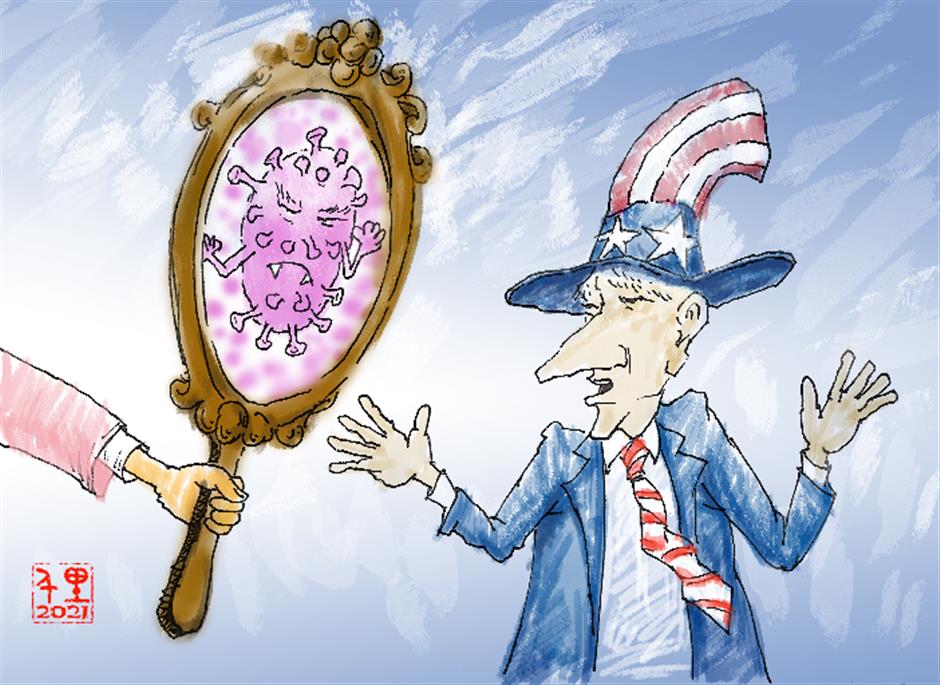 On May 26, President Joe Biden ordered the US intelligence community to report back to him in 90 days on the origin of COVID-19. Now halfway toward the deadline, the country is criticized by public opinions and health experts across the globe as it attempts to fabricate an origin of the virus with the "lab leak" theory that is now collapsing.

Following their strong condemnation of conspiracy theories in The Lancet last February, in a July 5 letter published in the medical journal, 24 health experts from around the world once again dismissed the lab-leak notion, as recent peer-reviewed studies strongly suggest that COVID-19 has a natural origin. "Science, not speculation, is essential to determine how SARS-Cov-2 reached humans", the letter said.

The advocates of the lab-leak theory are now overwhelmed by stronger voices of science and reason. On June 27, a Washington Post report quoted a US government official that "a 90-day review into the origins of the COVID-19 may not produce a definitive explanation" as "spy agencies conducting the review have yet to find conclusive evidence that would settle the debate over whether the virus came from human contact with an infected animal or was leaked from a Chinese virology lab".

This reminds me of a line from Chairman Mao – "Some people in the US are just too arrogant. They are unreasonable wherever they can be. If they are being a little reasonable, it's because they are forced to".

The laws of science must be observed, and rigorous, fact-based researches must be carried out in tracing the origin of COVID-19. Origin tracing for HIV/AIDS and SARS are still underway up till present. Given the lack of knowledge on COVID-19 and inadequate research capacity, tracing the origin of the novel coronavirus may entail a much lengthier period of time. Ninety days won't suffice, and that's for sure.

This being said, some are still turning a blind eye to science-based conclusions while shifting the blame to China with the "lab leak" theory.

In hyping up the lab leak theory, the dirty trick played by the US is exposed in its entirety – intelligence agencies first fed the media with some false information, the media followed up with misleading reports, then some so-called "experts" came out and fueled the conspiracy, and politicians stood out at the end and misled the public with the government point of view – they are good at playing this dirty game of covering facts with lies and nullifying science with political agendas.

Then you will understand why the evidence-oriented, science-based origin-tracing efforts of some western scientists, including scientists from the US, are undermined by political pressures, slanders and even threats. The US representative on the WHO team tasked with origin tracing and president of the EcoHealth Alliance, Peter Dazak, was fiercely attacked by both the White House and the Congress, after openly claiming that China is the victim of conspiracy theories. Anderson, an Australian scientist who used to work in the Wuhan Institute of Virology, faces frequent smears and threats after refuting the lab-leak theory with his own experience at the institute.

When the intelligence community of the US is commissioned with the "arduous task" of tracing the origin of COVID-19, it naturally reminds people of how Mike Pompeo, the former Secretary of State, takes pride in the CIA, which in his own words is an organization that "cheats, lies and steals". It also refreshes people's memory that Colin Powell, another former US Secretary of State, wielded the infamous test tube full of washing powder as evidence of weapons of mass destruction developed in Iraq – Those moments are now looming large again in front of us. No wonder people leave comments below news reports that the CIA knows nothing about science and pays no respect for science. A simple question I will ask here is, who would think that this US-style origin tracing isn't a game of political manipulation?

"There is no evidence of laboratory leak. The only 'evidence' so far is that there happens to be a virology institute in Wuhan".

"All the evidences so far are pointing to the fact that SARS-CoV-2 jumped from animals to humans".

"Tracing the origin of the virus is like a big puzzle game. It's now time to patch up the missing pieces".

Scientists continue to stand out and tell the truth about origin tracing, and no political pressure will ever stop them from talking.

The authoritative conclusions the WHO joint mission reached must be observed: The origin tracing must be conducted on a global scale, it should not be limited to a single region and should be carried out in many countries and regions, including of course the United States.

Scapegoating under the pretense of origin tracing

The US has failed more promises than that. It hadn't provided 80 million doses of vaccine for the rest of the world by the end of June. The fact is, only less than 24 million doses were provided to 10 countries and regions. It came as no surprise that Americans living in Thailand questioned in anger, "where are our vaccines?"

The fact itself speaks loud and clear.

Fact will not change no matter how well the US plays the game of political manipulation. Over 30 million Americans are infected with the disease, and more than 600,000 Americans lost their lives – thanks to American politicians' disrespect for science and politicizing of the fight against COVID-19.

What happens when they can't keep telling the lie that "America is in good shape"? They tell Americans "It's much worse elsewhere". Some Americans believe that "there is nothing like a little scapegoating game to get things going" – they smear China's epidemic-control achievement, they hype up the lab-leak theory and denounce the authentic report by the WHO joint mission. There is only one agenda behind all these actions that is to shift people's attention away from the failure of the US government in battling the virus.

At a time to mend ethnic division in the US and recover from the trauma of COVID-19, playing the blame-shifting game will do the country no good at all.

Racial discrimination, hatred and the gap between rich and poor have only gotten worse in the US during the times of COVID-19, further fueling the already acute problem of social division. A Gallup poll in June shows that most Americans now believe the "most severe problem" in the country is its "government", rather than the pandemic. If you follow closely the collapsed residential building in Florida, you will be astonished how slow the rescue effort was and how skilled the state government is in shifting the blame elsewhere, and you will know ordinary Americans were being honest in responding to the Gallup poll.

Charles M. Blow, a columnist at the New York Times, expressed his deep concerns in an article – considering more than 30 million infections in the US, and given the perpetual problem of increasing gun violence and racial discrimination fueled by the pandemic, COVID-19 could leave "lingering rage" for many years and even decades to come, even after the pandemic is successfully contained in the US.

Bigotry and selfishness will not defeat the virus. Rather than hiding in the corner and playing the blame-shifting game, the US should be honest with its mistakes, mobilize its resources and put them where they are most needed, and solve its own problems in a down-to-earth manner.

Playing the geo-political game will only jeopardize origin tracing

Tracing the origin of the virus is merely a pretense covering the US' real motive to suppress China.

However, in the eyes of Massini, an Italian Sinologist, Americans already learnt the taste of frustration. As Massini pointed out, the Biden administration tries to "attack China" via origin tracing and unite its European allies against China. Biden wants to prove "China has gotten a problem", but China is in very good shape, just as it was one year ago, two, three years ago and even a decade ago. All the evidence is pointing to one fact – the US that used to be in good shape is now in trouble.

This is well manifested by the G7 Summit, behind its superficial image of "solidarity" are countries seeking their own interest, and some countries are unwilling to follow the US' lead. British Prime Miniter Boris Johnson said he does not believe the COVID-19 virus escaped from a Chinese lab in Wuhan; and French President Emmanuel Macron said the G7 is not a club that is hostile to China.

A Pew Research Center survey on June 30 found "a dramatic increase in the share of respondents who say China has handled the pandemic well". According to the survey, there are multiple reasons behind this positive feedback, such as China's successful containing of the epidemic internally, its quick vaccination campaign and its engagement in global vaccine cooperation.

Even Kurt Campbell, the coordinator for Indo-Pacific affairs of the US National Security Council, has recently said that the US behaved very poorly in the first half of the "vaccine diplomacy" race, calling it "the worst in modern history" and admitting it's a disaster on all fronts. But he also said that in the second half of race, the US will act more proactively and will in particular intensify support for its allies in Southeast Asia, promising that support will not only come from America alone, but also the "Quad" (namely the US, India, Australia and Japan).

"Vaccine Diplomacy" and the "Quad" – the US is again falling into the paradigm of "small circle politics". The COVID-19 pandemic mirrors the visions held by a country. As President Xi Jinping pointed out, "viewed from the perspective of 'my own country first', the world is a cramped and crowded place of constant, fierce competition. Viewed from the perspective of 'a global community with a shared future', the world is a vast and broad place full of cooperation opportunities".

If the US continues to stuff its geo-political ambition into the box of "vaccine diplomacy", one can expect another disaster in the second half of the game.

At a time when COVID-19 is still raging around the world, helping others is also helping oneself. Only by understanding the problem through the lens of science and reason can we end this fight soon and cope with the next emergency more effectively. Stronger voices of justice in the international community have shown that in this fight between truth and lies, and science and prejudice, politicizing origin tracing and hyping up conspiracy theories may get you noticed, but it won't lead you anywhere in the end.

After all, history is written with truth and fact.

Contributed by Longyuan from Official WeChat account of Poquanle.