US author gets 'Closer to Heaven' 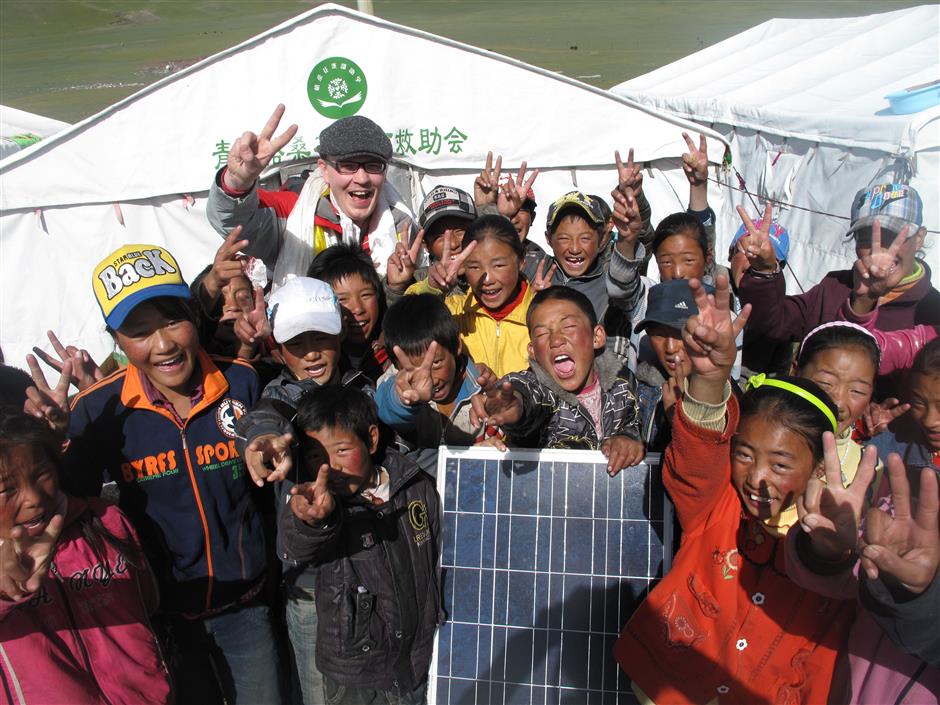 Erik Nilsson takes a picture with children in Qinghai, one of his favorite parts of China, where he donated solar panels to those in need.

Erik Nilsson comes from rural Michigan in the United States and has worked in Beijing as a reporter for the past 15 years. In that time his work has taken him to the heart of great tragedies, like the Sichuan earthquake, and to many places around the country that have witnessed great change. In 2016 he became the youngest person ever to be awarded the China Friendship Award, and he's in Shanghai to launch his new book. I caught up with him to have a chat.

Andy: What's your China story? How did you end up here?

Erik: I first came to China for three months in 2005 and have lived in Beijing since 2006. I originally planned to become a conflict reporter in such places as Africa, Latin America or the Middle East. I'd never considered Asia, let alone China.

But I fell in love with the country – the people – especially the people, the food, the culture, the history. And around my third year, I decided I'd stay to continue to learn about and experience the country and help tell its stories to the rest of the world through journalism.

What sort of things have you encountered in your years as a journalist in China?

I've spent the past 15 years traveling to every province on the Chinese mainland, especially to remote areas including some of the country's most isolated settlements or even uninhabited areas, covering poverty alleviation, disaster relief, rural development, nomadic issues, environmental protection and ecological restoration, breaking news and China's overall development from the front lines, in addition to covering such major events as the 2008 Beijing Olympics, 19th Party Congress, Belt and Road Forums for International Cooperation, Two Sessions, BRICS and the like on the ground.

I've traveled through the country's mountains, forests, deserts, grasslands and tundra on the backs of ostriches, camels, horses and yaks, in addition to the more common planes, trains, automobiles, boats, zip lines, cable cars and helicopters.

During this period, I've written hundreds of articles, and the videos and documentaries I've done since 2017 have been viewed hundreds of millions of times.

What's the place you've visited that has touched you the most?

I'd say the places that have made the most powerful impressions on me, that have transformed my life, are Sichuan, where the 2008 quake literally created hell on Earth – a place so dark and hellish that was transformed by the miracle of the rescue and recovery – and the Qinghai-Tibet Plateau, where I feel more alive than anywhere in the world.

It's where I rediscovered life after encountering so much death in the Wenchuan quake zone, especially spending many birthdays at a mass grave.

As a foreign reporter and writer in China, what are some of the difficulties in telling Chinese stories to the outside world?

Because of China's extremely unique history, culture and geography, it's difficult for many people outside of the country to understand how these have produced such a distinctive system and culture since it's so different from anything they've known, experienced or can relate to.

Telling the world about China has gotten a lot harder lately, too.

Unfortunately, many media in other countries, especially in the West, have amplified their biases, yet remain the main source of information for people who've never been to, let alone lived in or deeply explored, China.

You've come to Shanghai to launch your book, "Closer to Heaven." What's it about?

On May 12, 2008, a portal to hell opened on Earth in Sichuan Province. I start my new book, "Closer to Heaven: A Global Nomad's Journey Through China's Poverty Alleviation," there, visiting the quake zone 15 times.

This led me to another quake zone on the Qinghai-Tibet Plateau, where we installed a solar panel in an isolated school without electricity. We went on to electrify schools, and provide surgeries, scholarships, clothes, computer labs, libraries, food, medicine, coal and even yaks.

When I first arrived in China, I never imagined I'd buy, ride, milk or get kicked by yaks. This book is the capstone of my life's mission to contribute to and tell China's poverty-alleviation stories, visiting ostrich rodeos, leprosy villages, virtual-reality parks run by farmers – and much more.

These adventures brought me from the darkness of the Sichuan quake zone toward the light, from the US to the "Roof of the World" and closer to heaven. And they're a firsthand exploration of how China has lifted so many people out of the hell of poverty and closer to heaven, as it exists on Earth. 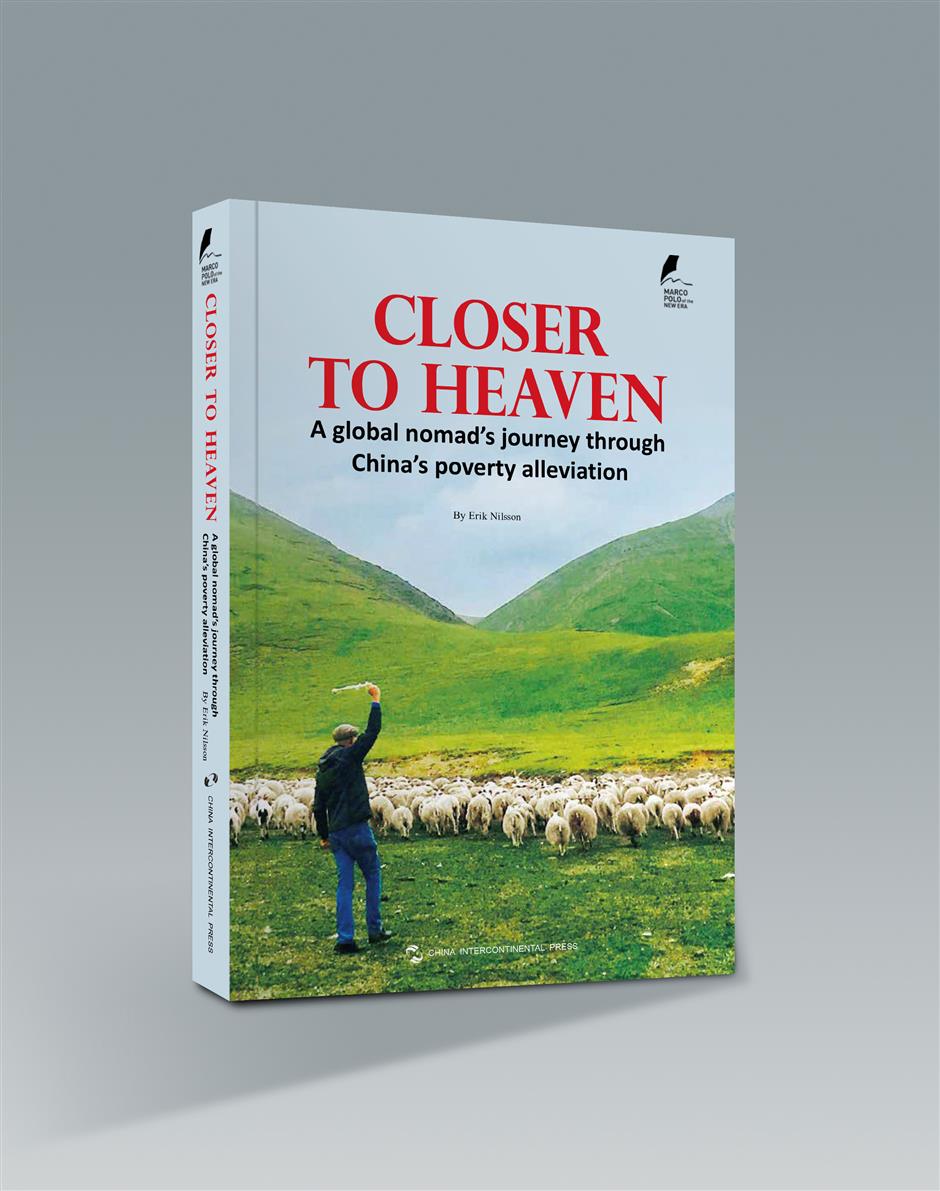 You received the China Friendship Award for your work. How did that feel and what did it mean to you?

I'm extremely honored to have become the youngest winner in history of the Chinese Government Friendship Award, the highest honor bestowed on foreign experts for their contributions to the country's social and economic development, at age 33 in 2016.

I never expected such recognition of my work to chronicle and contribute to China's poverty-alleviation and overall development, and to tell the stories of real China to the world, especially at a time when global understanding is becoming all the more crucial.

Special Reports
﻿
A very British Thanksgiving in Shanghai
New Party resolution, by learning from the past, shines the path forward
Explicating the Party's original aspiration
On the historical significance of the new resolution
Seriously, shut up about your first-world issues
Only forgiveness can lead to reconciliation
Better late than never to the Double 11 party
Extolling the rich taste of Afghan pine nuts
World trade would be threatened by unilateralism
Forum stresses global collaboration in tackling COVID-19
EXPLORE SHINE