China Post released special zodiac stamps to welcome the Year of the Tiger on February 1, an annual tradition that dates back 42 years.

The latest release has unwittingly sparked a nationwide controversy, as many netizens regard this year's tiger image as "lacking vigor and strength," according to the Global Times. Related discussions went viral shortly after the release of the new stamps.

It's only natural for people to disagree on the worth of artworks, including the aesthetic value of a stamp design.

As a veteran stamp collector, I understand a tiger stamp is more than just a stamp. The zodiac is a symbol of bravery and exorcizing evils, which is particularly relevant in our ongoing fight against COVID-19. As such, a tiger stamp must fully demonstrate the spirit of the zodiac animal.

As things stand, however, this year's tiger image on stamps leaves much room for improvement. For example, the image seems to fail to convey the vigor of the auspicious animal.

There are 12 Chinese zodiac animals that honor a lunar new year and reflect people's different attributes, including tiger, rabbit, dragon, snake and monkey. This tradition is why China Post has released special zodiac stamps every year since 1980, the Year of the Monkey. 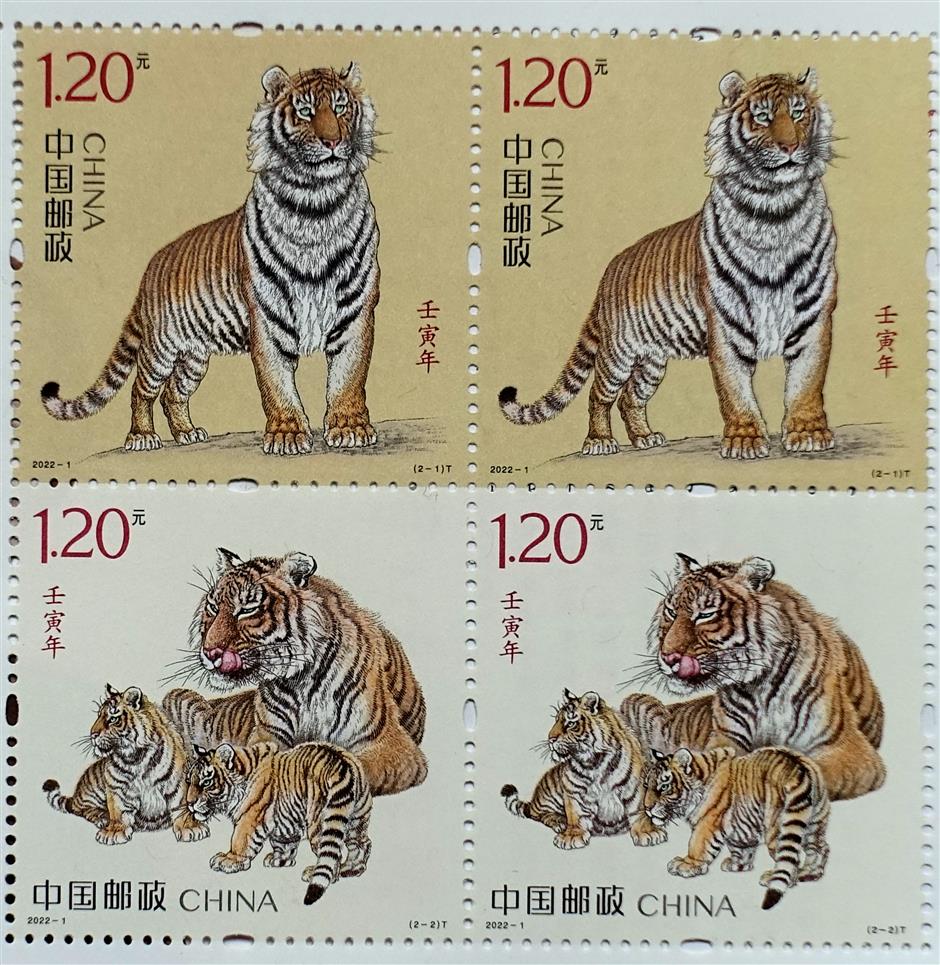 China Post has issued a set of zodiac stamps for the Year of the Tiger, an annual tradition that dates back to 1980.

Normally, the release of zodiac stamps is a special event for stamp collectors. We usually wake up early to wait in post offices and buy stamps for fun, hope and maybe fortune (yes, the first monkey stamp in 1980 is quite valuable now).

But professional stamp collectors don't have a monopoly on such pleasures. Zodiac stamps are so popular that even non-collectors pay attention to stamp designs, because they care about traditional Chinese culture.

Non-collectors have expressed no less informed opinions than professionals on how best to demonstrate the "tiger spirit" on a stamp. For example, Zhang Jinfeng, a renowned painter from north China's Shanxi Province, said "the portraits of the tiger shall represent the Chinese people's resolution to be competitive and courageous in the coming new year."

As of last June, the number of Chinese netizens surpassed 1 billion. Today, more and more of them care about topics related to traditional culture. Online posts about the Forbidden City's first snow and a dance performance in front of the Longmen Grottoes, for example, have become trendy topics on Weibo and WeChat. Gone are the days when gossips and rumors about entertainment stars dominate the majority of virtual debates.

The stamp design debate also shows that modern netizens have broad and diverse visions when it comes to topics such as digitalized formats of cultural relics and spreading Chinese culture overseas.

When it comes to zodiac stamp designs, I believe tigers and dragons are the most popular of the 12 zodiac animals, endowed with power and mystery as they are respectively known as "the king of mountains" (tiger) and "an omnipotent symbol of power and plenty" (dragon). Therefore, people have high expectations for the stamps to fully demonstrate tigers' strength and energy to exorcise plague, especially under the shadow of the pandemic.

A tiger roars in 2022 with six spirits ― strength, bravery, majesty, vitality, kingship and power ― on a recent Shanghai Daily front page. As such, I can understand why those who have high hopes for tiger stamps were a bit disappointed. They want a more vigorous tiger.

Outside the sphere of the postal service, many people are creating customized tiger symbols online. New formats include WeChat and NFT, or non-fungible token such as hongbao.

During a Lunar New Year, Chinese people often give hongbao, or red packets with money, to express good luck and best wishes. Many people and companies are now designing customized red packet images, mostly tigers. The images often integrate a company or individual's business range and pictures of animals. These digital tiger images are full of innovation and interesting themes, such as a robot tiger created by an artificial intelligence firm.

NFT-based digital tiger artworks can be found in Xintiandi. Many NFT tiger products debuted earlier this year with new technologies like blockchain and metaverse that can be regarded as stamps in the digital age. I may be investing in them when metaverse is more evolved in China.

My favorite tiger zodiac stamp among the four generations of tiger stamps (1986,1998, 2010, 2022) is the one from 1986. Despite differences in opinion, what matters most is that everyone cares about our traditional culture.