Need for speed, cold pursuit: Skating like the wind

Speed. The desire to go fast is, I believe, inherent to the human race at our core. Throughout our history as a species, we've continuously improved our ability to traverse our surroundings with ever-increasing efficiency. Simply put, we homo sapiens are not much like the humble sloth. We like to move fast.

When it comes to physical movement, that desire for pure speed is tempered in most of us out of an instinct of self-preservation; a desire to keep ourselves safe and in one piece. However, the rush of adrenaline that comes with rocketing forward at a breakneck pace is undeniable; whether in a car, on a roller-coaster, on skis, or otherwise, speed provides an exhilarating experience.

We enjoy speed in our sport as well. Many sporting events are entirely focused on it, consisting of a race to the finish line in which victory is directly assigned to whoever covers the designated distance in the shortest amount of time. From simple running to horseback to automobiles, racing is a most basic competitive activity, and the faster we can push ourselves forward, the more successful we'll be at it.

This principle can also apply to ice skating. Figure skating is far from a race. Figure skaters are more of precise perfectionists, meticulously crafting a routine and choosing just the correct moments to muster the strength and explosiveness to pull off an incredible move.

Speed skaters, while certainly also refining their craft with pinpoint precision, do so under a starkly contrasting set of circumstances. They're flying around the ice at speeds of up to 60 kilometers per hour. And while figure skating is perhaps the most aesthetically pleasing sport in existence, speed skating is undoubtedly a more intense viewing experience.

The sport is divided into two main categories: traditional (or long-track) and short-track speed skating. The long-track variety has been a staple at the Winter Olympics since the first rendition of the Winter Games in Chamonix, France, in 1924. It's held on a 400-meter, oval-shaped course and partitioned into races of distances ranging from 500 to 10,000 meters in total. Beijing's new state-of-the-art National Speed Skating Oval, known colloquially as the Ice Ribbon, is serving as the host venue for the 2022 competition.

In long-track events, the competitors skate two at a time, racing against the clock rather than directly racing against one another. Because the track's distance is greater, the skaters can accumulate more speed down long stretches of straighter track and thus record generally faster times over identical distances than short-track skaters. 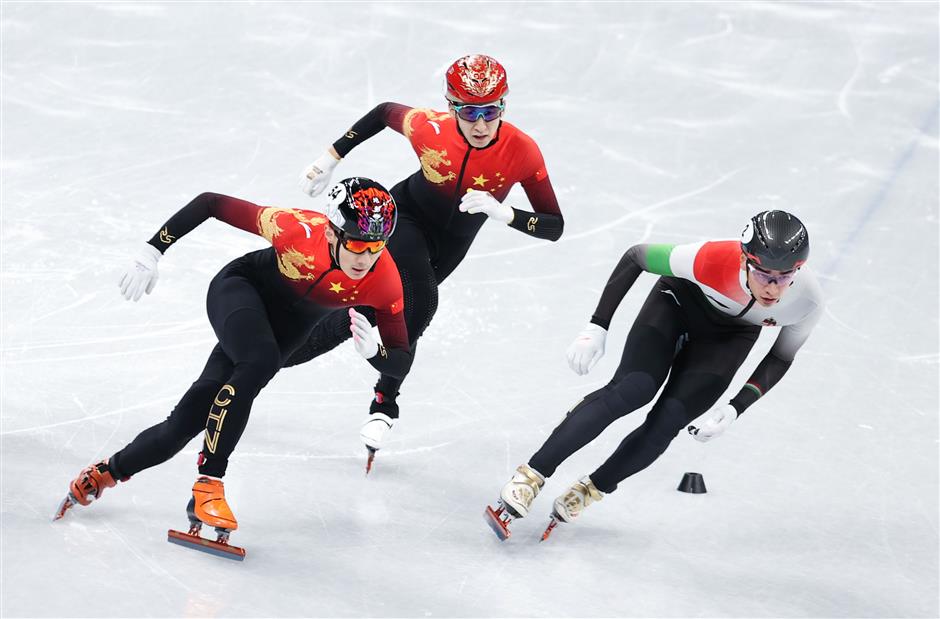 Short-track skating, on the other hand, was introduced as a full Olympic sport for the 1992 Winter Games and differs more markedly than might be apparent at first. The most obvious contrast is the track's distance ― of course ― which is only just over 111 meters in length. This leads to a greater concentration of curves with sharper angles, meaning that the skaters are unable to accumulate quite as much velocity as in the long-track events. However, due to the sharper curves, they experience much greater centripetal forces exerted upon their bodies ― up to three G-forces ― and must ration their energy to preserve stamina, particularly in the longer heats.

Another major distinction of short-track skating is that, depending on the race's distance, four to six skaters will occupy the track simultaneously, meaning that they whip around the loop in tight quarters, twisting and bending at impossible angles, arms bending like rudders aiding quick changes in direction. The crowded scene is a bit reminiscent of large cycling races, or, for me personally, stock car racing.

This type of automobile racing, known in the United States as NASCAR, the name of the sport's governing body, consists of packs of up to 30 cars barreling around an oval-shaped track, often bumping and grinding up against one another. Unsurprisingly, this can lead to gruesome crashes and pile-ups that consume large swathes of racers in the subsequent wreckage within seconds.

This same phenomenon can occur in short-track speed skating as well. Due to the inherent danger present, short-track racers are required to wear protective helmets, eyewear, gloves and cut-proof body suits made of kevlar to prevent injury from the blades of other skaters.

Historically, the Netherlands has been the world's strongest long-track speed skating nation, piling up 125 medals, including 44 gold, to rank first worldwide. This includes two already in 2022, with both Ireen Wüst and Irene Schouten notching Olympic records in the women's 1,500-meter and 3,000-meter events, respectively. Nils van der Poel of Sweden also secured an Olympic record with his run in the men's 5,000-meter event.

In the short-track events, China has scored a great deal of success so far, earning gold in the mixed relay and both gold and silver in the men's 1,000-meter race.

So while figure skaters provide elegance, curlers displays delicate precision and accuracy, and ice hockey players demonstrate hard-hitting teamwork and coordination; if it's pure velocity on the ice that catches your fancy, be sure not to miss the upcoming speed skating events.