The left way to do it: The lives of the left-handed lepers

"There's more than one way to skin a cat."

As a lifelong cat owner, I've always hated this expression. Like, why ... who came up with ...?

The point of the saying is that there are frequently multiple different ways to go about completing a task. Sometimes, the "traditional" method of getting something done is the best or most efficient, but these norms don't necessarily need to be adhered to all the time.

For approximately 10 percent of the world's population, we tend to do things the opposite way the rest of you do them. Think of the way you do something as simple as brushing your teeth or scrolling through your phone; we do it exactly backward.

I'm talking, of course, about left-handed people, a group to which I proudly belong.

Now, I must be clear, I'm not claiming left-handed superiority, though I have always loved to throw around the expression that only we left-handed people are in our "right mind," as the opposite lobe of the brain is the one that controls either side of the body's extremities.

The notion that all left-handed people are "right-brained," however, is a myth. Studies in recent years have shown that ideas about individuals being left- or right-brained ― and that tendency affecting creativity versus logic in thinking ― are not based in fact.

Regardless, I believe an individual's distinguishing characteristics, especially those as harmless as which hand one feels more comfortable and natural using to complete everyday tasks, should be appreciated and not stigmatized.

However, this has not been the case for much of human history. Left-handed children in countries and societies all around the world have been forced to eschew using their naturally dominant side and learn how to write, eat and do everything else with their right hand. Often, these youth faced punishment if they failed to convert and conform.

The reasons for this are varied.

In some cultures, the left hand was traditionally the hand used for the less sanitary of hygenic duties, so eating, shaking hands, and any other germ-free task was performed with the right hand.

In others, the native language developed with the intrinsic idea that right was ... well, right (not a linguistic coincidence, that) and that left was wrong. In fact, the English word "left" originated with the Anglo-Saxon word "lyft," meaning "weak" or "broken." Even more unsettling is the root of the word "sinister," coming from the Latin word sinistra, meaning "unlucky," or, you guessed it, "left."

These negative connotations toward the left side exist in languages from all around the globe, ranging from Germanic to Romance, Scandinavian to Slavic, and Sankrit to Turkish to Vietnamese and many, many more, in which right in some way means "proper" or "good" and left carries a less favorable meaning.

Of course, just because a language developed in such a way certainly does not imply that speakers of that language necessarily hold negative beliefs about southpaws. However, it is a fact that in many religious cultures, particularly during medieval times, the left was seen as having associations with the devil or evil entities. Left-handers could be accused of witchcraft or demonic possession.

Quite the predicament in that time and place! 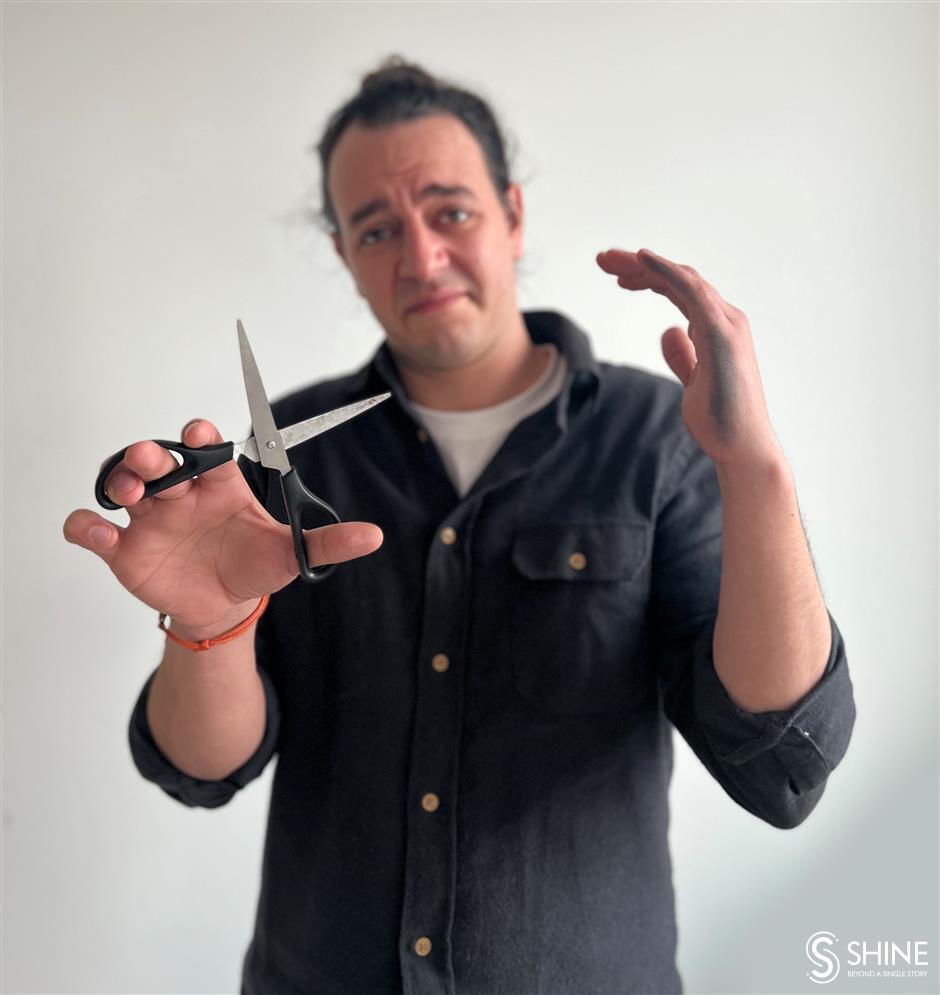 The pencil smear on the author's left hand is the "silver surfer syndrome" from writing with the left hand, while regular scissors don't work very well with left hand.

Of course, ideas about lefties have evolved since then, but throughout the early and into the middle parts of the 20th century, stigmas still existed.

Prominent psychologists of the mid-1900s like Briton Cyril Burt and American Abram Blau opined during this era that left-handed people were "stubborn and willful" (Burt) and the result of negativity and obstinacy, likening children using their left hands to refusing to eat their food at dinnertime and suggesting that as adults, left-handed people grow to be rebellious if not "corrected" at a young age (Blau).

Into the 1970s, using one's right hand to write was mandatory for students in Spain, Italy, Yugoslavia and the Soviet Union. In Albania, left-handedness was against the law!

Traditionally, in China, while not going to measures that extreme, children have been largely taught to use their right hand to write regardless of their natural tendency. Chinese characters are easier to write with the right hand, and correctly written characters are more complicated to write than those in most other alphabets, involving certain orders of strokes and intricate details.

Still, that doesn't mean they're impossible for lefties to perfect!

Growing up as a lefty kid in a right-handed world, school was fraught with minor trials and tribulations that added up to occasional frustration.

Regularly constructed scissors don't work properly when held in the left hand, particularly the less sharp versions often found in primary school art classrooms. Some schools offered "backward" lefty scissors, but they were often in disrepair, or there was only one pair for a class with two or three left-handed students.

Some classroom desks only had a half table attached in order to allow for more to be squeezed into smaller classrooms. Of course, those tables were always attached to the right side, forcing us lefties to scrunch and twist into awkward positions during testing time.

And of course, something that every lefty reader will understand: "Silver surfer syndrome." This inevitably occurs when writing with a pencil, when the outside of the writer's left hand smudges against the already-written text, smearing it and leaving a silvery stain down the side of the hand. I never once came home with a clean left hand after a day at school.

There are instances where being a lefty can provide advantages. In baseball, for example, a left-handed batter stands on the opposite side of the plate from a righty. This causes a right-handed pitcher to have to adjust his approach, creating some awkwardness and giving the advantage to the batter as the ball breaks at different angles from the opposite vantage point. Also, the hitter can see the ball more clearly coming from the hurler's hand as the arm angle of the thrower comes from out in front of the batter's eyes as opposed to from behind his head.

This advantage is so pronounced that about 50 percent of elite-level professional hitters in baseball bat from the left side of the plate, far outpacing the prevalence of lefties in the general population. A left-handed pitcher, though, eliminates this advantage, so southpaw throwers are also a valuable commodity to thwart a lineup full of lefty hitters. It's a bit of game theory at play.

I, of course, never made the big leagues, so I was unable to take advantage of this, but it's true that in sports, defending a left-handed player is often more difficult because of the unorthodox nature of the attack.

In China, one of the most common struggles we lefties endure occurs at the dinner table ― particularly at large, round, family-style tables at large gatherings. If everyone at the table holds their chopsticks in their right hand, there exists a synergy of activity direction. But when one of us lefties sits down, our left elbow constantly bumps against the right elbow of our neighbor at the table.

I have often been told during my time in China that left-handed people are more intelligent. Growing up in the US, I'd never heard that theory before (but I certainly didn't argue with it!). Data suggests this might be marginally true, but only in terms of IQ ― which isn't really the best way to determine a person's true smarts ― and only by a very, very small amount. It's certainly not a rule or true of every individual.

However, there have been many great and memorable lefties throughout history, including names such as Sir Isaac Newton, Leonardo da Vinci, Albert Einstein, Mahatma Gandhi, Walt Disney and Pablo Picasso, not to mention many others, so, despite being branded throughout history as "wrong" or "backward," we have contributed a lot to the world.

So celebrate left-handers! Don't try to change them! It's okay to have a special trait that makes one part of a community of people unique and just slightly distinguishes them with a special little quirk. After all, who cares which hand you use? We have two hands for a reason.

As long as it's not to skin cats.