AS one of the first cities to feel Western influence and culture, Shanghai as a rule boasts a strong business culture embedded deeply in its southern style manners which generally impresses northerners as being soft, nuanced and refined.

Imagine the jolt one will get in realizing that this indigenous character gave rise to “red”, or revolutionary, culture which is often perceived as tense, tough, or even violent in its life-and-death struggle.

The city is where aspiring revolutionaries first met and put their ideas to the test. To be more specific, it was where the Communist Party of China was founded, and was the seat of its operations for 12 years after its founding.

These seeming contradictions were outlined in a lecture this week by Dr. Zhu Hongzhao, vice dean of the Institute of Literature at the Shanghai Academy of Social Sciences.

According to Zhu, Shanghai is an example par excellence illustrating how the best of Chinese culture achieved innovative transformation and development after Shanghai was declared open to foreign trade in November 1843. It was forced open chiefly on account of its advantageous geographic location that gave it easy access to the outside world by the East Sea, and to the Chinese hinterland by the mighty Yangtze River.

As a hub of commerce, the confluence of domestic and overseas influences acted on the temperament of a people that came to be known for their tolerance, pragmatism and their readiness to embrace anything new or novel.

In time it gave rise to the unique haipai (Shanghai school) culture, which at the very beginning was a pejorative referring to the Shanghai school of Beijing opera. Its cultural sophistication, mellowed by the spirit of openness and tolerance, enabled Shanghai to stand out among the five early treaty ports which also included Guangzhou, Xiamen, Fuzhou and Ningbo.

For instance, unlike in Guangzhou where foreigners were allowed to settle only in designated areas, in Shanghai, although the official Chinese position was that land could not be sold outright to foreigners, a compromise was reached whereby it could be rented to them in perpetuity. Thus British consul George Balfour was able to rent a house within the Shanghai town walls for use as the official British consular residence — and some locals reportedly made a good profit selling tickets to allow curious local residents to have a peep at the outlandish “barbarians”. Zhu explained that the anecdote testified to, among other things, Shanghainese’ astuteness in money-making. When Balfour realized this, he insisted on moving out of Shanghai town, which led to the setting up of foreign concessions. 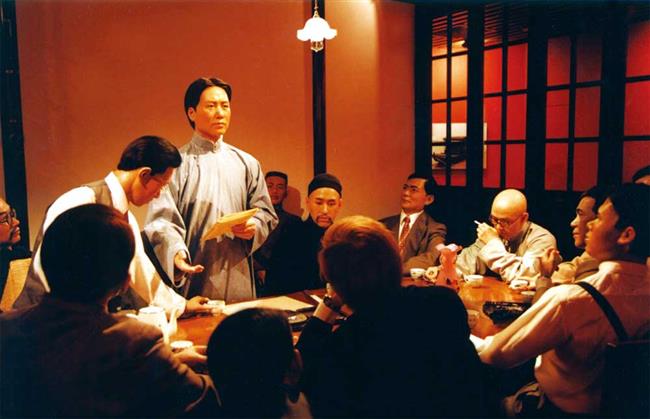 Waxworks of Party deputies (Mao Zedong in the middle) recreate a meeting on the site of the First National Congress of the Communist Party of China in Shanghai.

Given Shanghai’s position as a crucible of new ideas, the fact that foreign imperialists enjoyed extraterritorial rights while riding roughshod over the Chinese people naturally humiliated the revolutionary pioneers keen on building a powerful nation capable of exercising full sovereignty. Foreign concessions became a stigma that was to be completely erased only by the Chinese communists.

Thus when haipai is used as an umbrella term for Shanghai culture, as a byword for openness, diversity, pragmatism, respect for rationality and aesthetic sensitivity, it is used in an entirely positive light. It is also heavily tinged by the red culture that was informed by, at first, the aspiration to save the nation from perdition and ensure its survival, and then the determination to achieve the great rejuvenation of the Chinese people, which by-and-by became the dominant color of mainstream haipai culture.

The red culture continues to influence the Shanghai spirit today. The core of red culture, as we can see today, is concern about the people’s happiness, national rejuvenation, and building a community with a shared future for mankind. Such lofty ideals can be well adduced genetically by studying the profiles of the first members of the Party. When the Party first convened in Shanghai on July 23, 1921, of the total of 58 Party members at that time, 18 had studied in Japan, 25 were college students (of which 17 were from Peking University), and 13 had a middle school education level (which was considerable at that time).

This make-up spoke volumes for the fact that most of these Party members came from well-off families and they chose to become revolutionaries not for their own livelihood, but were fired by the desire to save their nation from doom with a view to achieving the great rejuvenation of the Chinese people. These are the “original aspiration” and “sense of mission” that we should cherish and value about Shanghai’s city spirit.

Unlike other intellectuals, these new-style intelligentsia had embarked on a revolutionary path on the basis of combining workers and peasants.

Zhu explained that unlike the xiang dang in the feudal period, which was about cliques, partisans, ganging against each other, or the party in capitalist countries, where it represents the interests of “a part” of the people, the CPC is the vanguard of the Chinese working class and the faithful representative of the fundamental and long-term interests of all ethnic groups.

Shanghai’s city spirit has to be understood in the context of its historical conditions, as Shanghai faced an entirely new situation after the founding of the People’s Republic of China in 1949. In 1843 Shanghai was forced open by the gunboats of invading Western imperialists led by Great Britain. Not long after 1949, Shanghai had to shut its gates as a result of military sanctions and an economic embargo imposed by the US in the name of the UN.

Then Shanghai turned its attention to the Chinese hinterland. Whether the city looks outward or inward, it equally gives full play to its city spirit.

Answering the call “all the country supports Shanghai, and Shanghai supports the nation,” the Shanghai people have been actively involved in supporting the nation’s economic development.

During the first Five Year Plan (1953-1957), a host of industrial enterprises and commercial and research institutions had been relocated to the hinterland to support local economic development.

During the difficult years between 1959 to 1961, to relieve urban population pressure, a total of 415,000 Shanghai residents were sent back to their native towns in Jiangsu, Zhejiang, and Anhui provinces to be engaged in farming. From 1966 to 1976, over one million Shanghai youths were sent to the countryside for re-education. Meanwhile, a large number of technical staff and engineers were posted in infrastructure or manufacturing facilities relocated to middle or western China (da san xian or xiao san xian) as part of the war preparedness effort at a time of tensions with some countries.

Predictably, wherever Shanghainese found themselves in their new posts, they would inevitably take with them their unique city spirit, and with it their modernized way of life. During the time of the planned economy, Shanghai morphed from a commercial city strong in industry into an industrial city with an emphasis on commerce, contributing to about one sixth of the national income — from a city whose population was only about 1 percent of the national total.

Thus the red, the southern, and the haipai culture are all important components of the Shanghai spirit, mutually enhancing and reliant. They are all rooted in the daily life and character of local residents. Today the red culture gene is the force driving Shanghai’s cultural innovation. In terms of cultural innovation, the watchword is to live up to the original aspiration, absorbing the best of Western culture and embracing the future with a higher degree of cultural awareness and pride.