Tai chi teaches harmony, a gift the West has lost 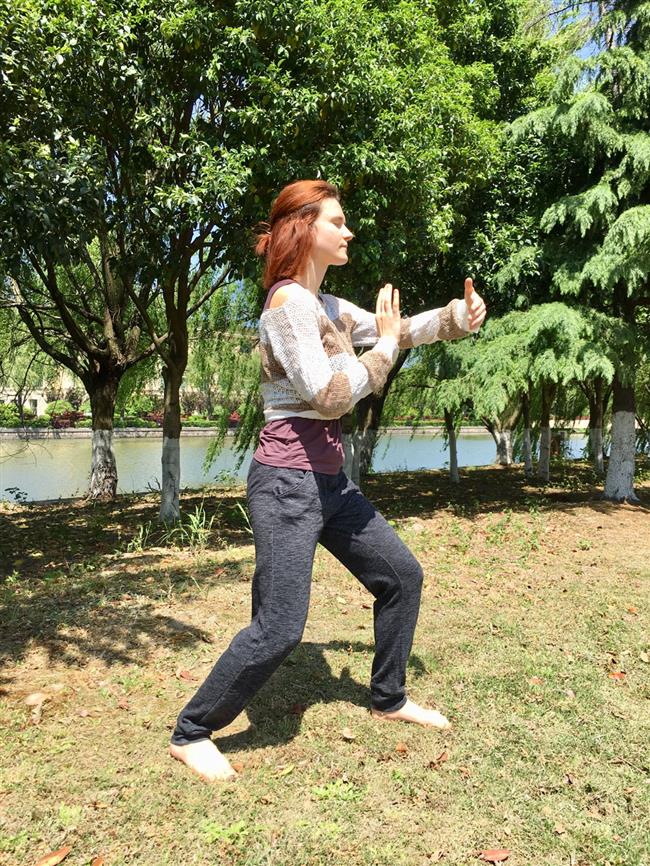 For Tatiana Gordeeva, tai chi hints at a new meaning of life.

“BE soft as water, light as clouds in the sky and gentle as the wind. Learn from nature, imitate nature, be nature.” These words echo in my mind each time I practice tai chi, a traditional Chinese wushu (martial art) and an essential part of Chinese philosophy.

Being active, I’ve always been interested in keeping myself fit by doing some intensive exercises.

I used to jog in the morning or in the evening, swim in summer and ski in winter — perennially engaged in all kinds of active sports so popular in Russia, my home country. Schooling is competitive too. I studied hard, because otherwise I wouldn’t enter a good university and then wouldn’t go abroad for studies. Fighting my imperfections, I was always ambitious to reach new horizons.

It’s probably a positive thing to set goals and reach them but I seem to have little time to stop and reflect: What do I truly need? Now tai chi seems to hint at an answer, by steering me to be more in harmony with the surrounding world.

After two years of studying in Shanghai, I was lucky to get to know a Chinese tai chi master, a broad-minded and cheerful person who looks quite content with his quiet life in a secluded Taoist temple called Dong Yue Miao in Songjiang District.

Practicing tai chi and talking with him afford me a glimpse into the difference between Western and Chinese outlooks — particularly as to how individuals relate to nature and society.

In practicing tai chi, elegant arms, drawing circles in the air, slow steps with slightly bent knees, a hardly noticeable turn of the body … each movement reflects Chinese philosophy that represents the universe, Dao (the Way), as the harmony of opposites yin and yang.

As night (yin) turns to day (yang), and hot (yang) becomes cold (yin), everything in this world is in the state of flux or continuous change. To one brought up on the Western tradition like me, it was also puzzling at the beginning: How can such extremely slow movements improve one’s health? As a matter of fact, tai chi is informed by philosophical tenets like yirou kegang — the softest can get over the hardest.

All tai chi actions resemble more the flow of water: slow, smooth, but irresistible. As Laotzu stated in his “The Classic of the Virtue of Dao”: “Nothing in the world is more flexible than water. Yet when it attacks the firm and the strong, none can withstand it”.

More importantly, this philosophy is applied to other spheres of life. In the military, for instance, retreat and assessment of the situation are preferred to brutal force or attack.

Since I was very young, I have been wont to admonitions like “If you don’t exert yourself, you won’t succeed”.

Chinese philosophers Laotzu and Chuangtzu, by contrast, suggest not hurrying for success, merits or high social position, but rather staying modest and humble. Doing things spontaneously, without care or concern, can make us truly happy.

Taoist influence is also manifest in political spheres, as in the idea of wuwei (no action) as an important principle of political governance in traditional Chinese society, suggesting a ruler should be wary of interference, heavy taxes, conflicts or war, allowing things to run their course.

After practicing tai chi for several weeks, I can see that my body has become more flexible, and my mind become less distracted by wayward thoughts, at least during the time of training. In time I seem to be more in sync with nature.

It is not surprising that tai chi is becoming more and more popular in Russia with a lot of training centers being opened.

Significantly, this might in one sense suggest a thirst for calm and peace in a fast-changing age of technology.

The author is an intern with Shanghai Daily.