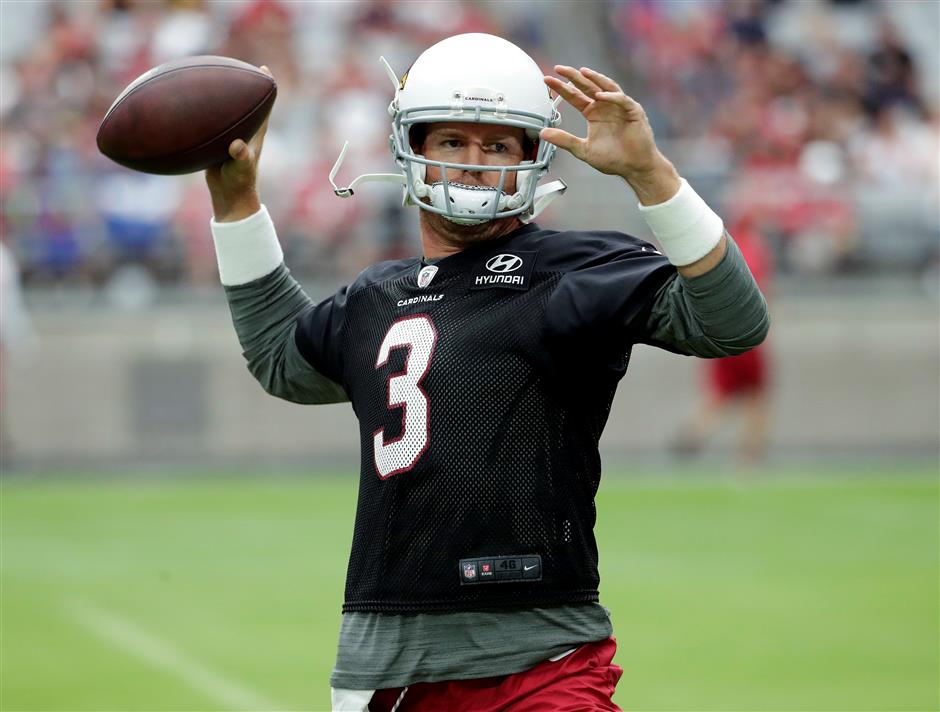 For the first time in his career, Carson Palmer abandoned his usual pattern and didn't throw at all for several months.

The 37-year-old quarterback says the results are obvious as he begins his fifth training camp with the Arizona Cardinals.

"It's hard to explain. You just feel better," Palmer said before the team went through its first training camp practice on Saturday. "You feel like you have more zip, more velocity. ... I feel like I can go out and throw 150 balls in practice. I don't think I felt that way coming into camp last year."

After their disappointing 2016 season, the Cardinals aren't getting much national attention this year. Experts point to Palmer's age and the fact his play diminished a year ago after his outstanding 2015 campaign.

Palmer is entering his 15th National Football League season and said when he was younger he never dreamed he would play so long.

"In football years, I think it's perceived once you get to 35 you're old," he said, "but if you can still put it on every day and play and work out and train and prepare mentally, I look at is as being experienced and mature."

Coach Bruce Arians acknowledged that a team's success is usually tied to the play of its quarterback.

"I've been fortunate to be around some really, really good ones," he said. 'It's always fun going to practices and going to the stadium on Sunday when you have a good one. When you don't have one, it's rough."

So, much of any success Arizona has this season will depend on Palmer, who is used to that kind of scrutiny.

"You get probably a little nervous at first as you're coming up," he said, "but you get kind of addicted to it and enjoy it and enjoy the pressure that comes with the position."

Palmer had his best season as a professional in 2015, throwing for 4,671 yards and 35 touchdowns, both career highs, with 11 interceptions. He guided the team to a 13-3 record and an appearance in the NFC championship game, a loss at the Carolina Panthers.

The team had virtually everybody back last year, but staggered to a 1-3 start and finished 7-8-1.

Palmer had his sixth career 4,000-yard passing season (4,233), but his TD total dropped to 24 with 16 interceptions. He was better the last half of the season, after Arians started giving him off for Wednesday's practice.

That led to the decision to severely limit his throwing in the offseason. Palmer said he followed orders.

"I've been playing so long you get so ingrained in throwing in March, April and June," he said, "and then to not do it is just odd. It just feels like something's wrong. But I listened to experts, like coach Arians. ... I listened to their approach and I'm all in."

Much is being made of that "window of opportunity" nearly closing for this group of Cardinals. This could be the final go-round for the trio of Arians, Palmer and Larry Fitzgerald. One or more of them might retire after this season.

Palmer said he doesn't know how much longer he will play.