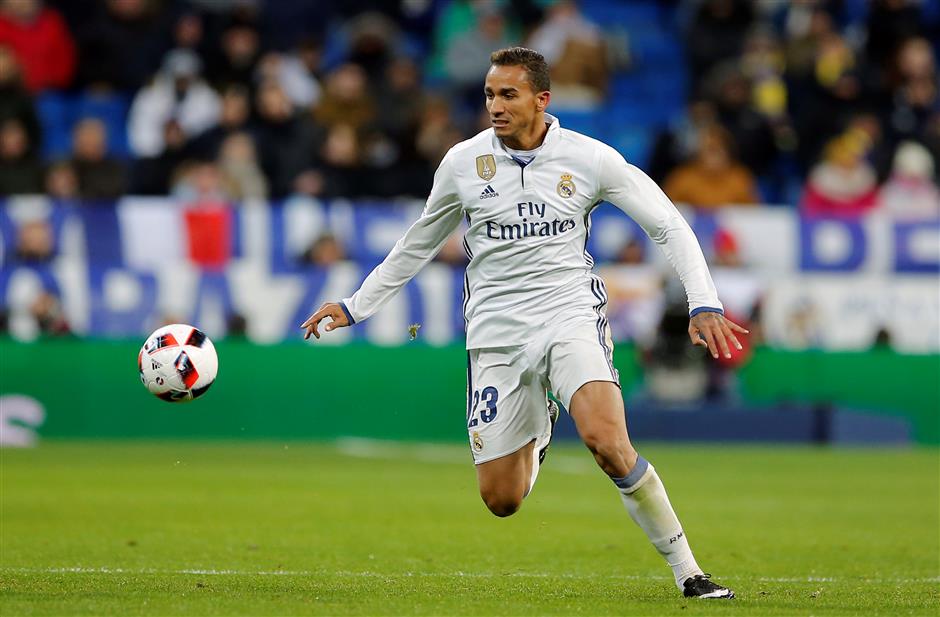 In this January 18, 2017, photo Real Madrid's Danilo controls the ball during the Copa del Rey, quarterfinal, first leg against Celta Vigo at the Santiago Bernabeu stadium in Madrid. Manchester City has signed Brazil defender on a five-year contract.

Danilo will be fulfilling his ambition to play under Pep Guardiola after signing for Manchester City from Real Madrid on Sunday.

The Brazilian defender, who can play on either flank as well as at center back, signed a five-year contract to increase City's threadbare options at full back.

"There has been strong interest from other clubs, but it has always been my ambition to play for Pep Guardiola," Danilo said. "As soon as I heard of his interest, I knew immediately I wanted to be a City player."

City has a shortage of wide defenders after releasing Gael Clichy, Pablo Zabaleta and Bacary Sagna last month and then allowing Aleksandar Kolarov to move to Italian side AS Roma on Saturday. Kyle Walker, who joined from Tottenham Hotspur, was the only other full back available to City manager Pep Guardiola before the signing of Danilo.

"Football is very dynamic and it requires quality players in every position, so I think a player who can play in different positions at a good level has an advantage, and becomes very important for the team as well," said Danilo, who is awaiting his British work permit. "I prefer just to play. I don't have a favorite position. I am used to playing as right-back but any time I'm on the pitch in the starting 11, I'm always happy.

"He (Guardiola) told me I'm ready and that I can play in several positions, right back, left back, midfield. I just hope to help him out as he expects."

Danilo is leaving Real two years after joining from Porto, having won back-to-back UEFA Champions League titles and the Spanish title once. Financial details of the transfer to City were not disclosed.

In six years at United, De Gea has played 269 matches and won seven titles with his eye-catching displays gaining interest from clubs across Europe.

Mourinho said United was open to a move for the 'keeper but clubs had withdrawn their interest.

"I can guarantee that he is not going this season," Mourinho told reporters in San Jose ahead of today's preseason International Champions Cup match against Real.

"My feeling is it will very difficult for him to go. He is a very honest, straight boy. He was contacted for a long time, the club was closed and then we opened. I always have this feeling when a player has a desire to go, then I don't like to stop players...

"So we opened it and then they decided to close it. I see him really happy, focused, working better than ever and 100 per cent he stays with us."

United playmaker Ander Herrera stressed the importance of his Spanish teammate, whose deadline-day deal with Real collapsed in the 2015 summer window.

"If you lose the top three in any position, like David is... it is a great loss," Herrera told British media.

"We don't want to lose them... For me, he's the best in the world, so I want to keep him here at United.

"He is a goalkeeper who can give you points. That is very important. I want to keep him here, to play with him, because he's a fantastic 'keeper and also my friend, and I think you can see he's very focused on Manchester United."