Manchester City summer spending spree not over yet, says Guardiola 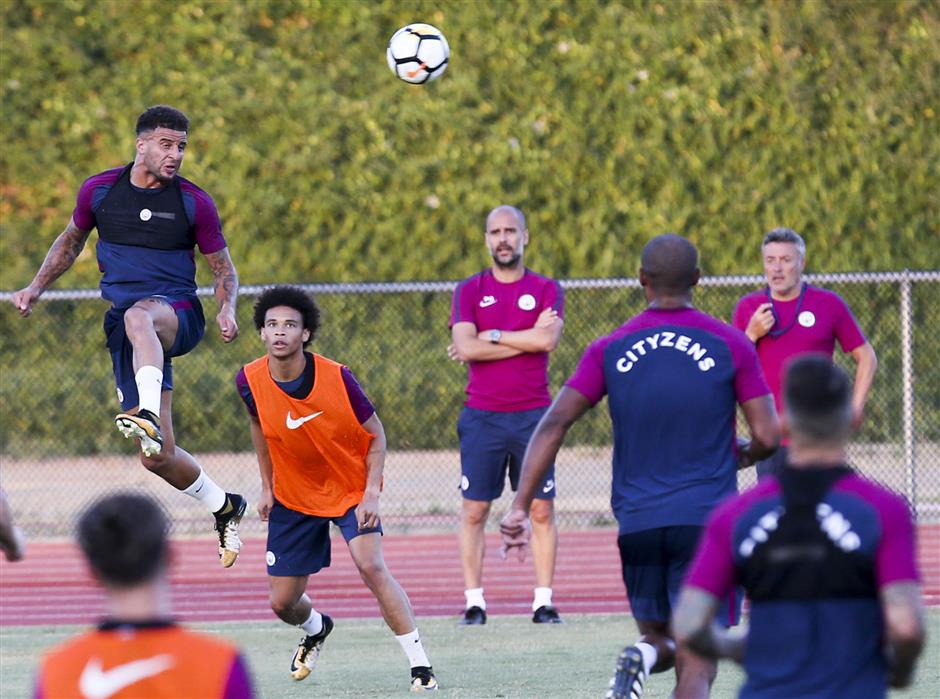 Manchester City defender Kyle Walker (left) takes part in a practice session as manager Pep Guardiola (center) oversees the training at the StubHub Center in Carson, California, on on July 25, 2017, ahead of the team's International Champions Cup match against Real Madrid.

Pep Guardiola has confirmed that Manchester City is "still looking" to add to its 200-million pound (US$260 million) summer spending spree, although he refused to comment on the possibility of hijacking Real Madrid’s move for Kylian Mbappe.

City has been the major shoppers in the transfer market after splashing out an English Premier League record total of 200 million pounds to bring Benjamin Mendy, Bernardo Silva, Kyle Walker, Ederson, Danilo and Douglas Luiz to the Etihad.

But it remains likely that it will continue its haul after being strongly linked with moves for Arsenal frontman Alexis Sanchez and Monaco teenage striker Mbappe.

Mbappe has been on City's radar throughout the summer, although there have been strong suggestions in Spain that Real has agreed a fee of 180 million euros (US$210 million) for the 18-year-old.

Ahead of the International Champions Cup encounter against Real Madrid, in Los Angeles, Guardiola wasn't being drawn on either.

"They are Monaco and Arsenal players, so nothing to say," he said.

But he did confirm that City was still looking at options in the market, albeit he was coy on whether another striker was on the agenda.

"We have the two exceptional forwards in Gabriel (Jesus) and Sergio (Aguero)," he said. "We will see.

“The market finishes on August 31, which is not good for the managers.

“The competition (Premier League) starts on the 12th (of August) and the market is still open. That is not good for all the clubs.

"We will see until the end of the transfer window."

Mendy became City's latest signing earlier this week when the left-back arrived from Monaco in a 52-million pound deal.

The 23-year-old is still around a fortnight from featuring in a City shirt due to injury, but Guardiola is delighted to have brought in a defender who made such an impression during Monaco's UEFA Champions League campaign last season.

"He can attack inside and outside," Guardiola said. "He's a young player so sometimes you have to pay a bit more for them.

"But we have one guy for the next five or six years."

Bringing in younger players at the back was clearly on Guardiola's mind this summer after jettisoning the 30-something quartet of Pablo Zabaleta, Gael Clichy, Bacary Sagna and Aleksandar Kolarov to bring in fellow full-backs Mendy, Danilo and Walker.

City spent 130 million pounds on that trio alone, yet Guardiola believes they will offer long-term value for money.

"Manchester City didn't invest in their full-backs for six or seven years and all four were 30-31 years old," he said.

"We decided to make the squad younger and we tried to get the best full-backs possible.

"Dani Alves was free but decided to go to Paris. Kyle, Mendy and Danilo were the best options we had."