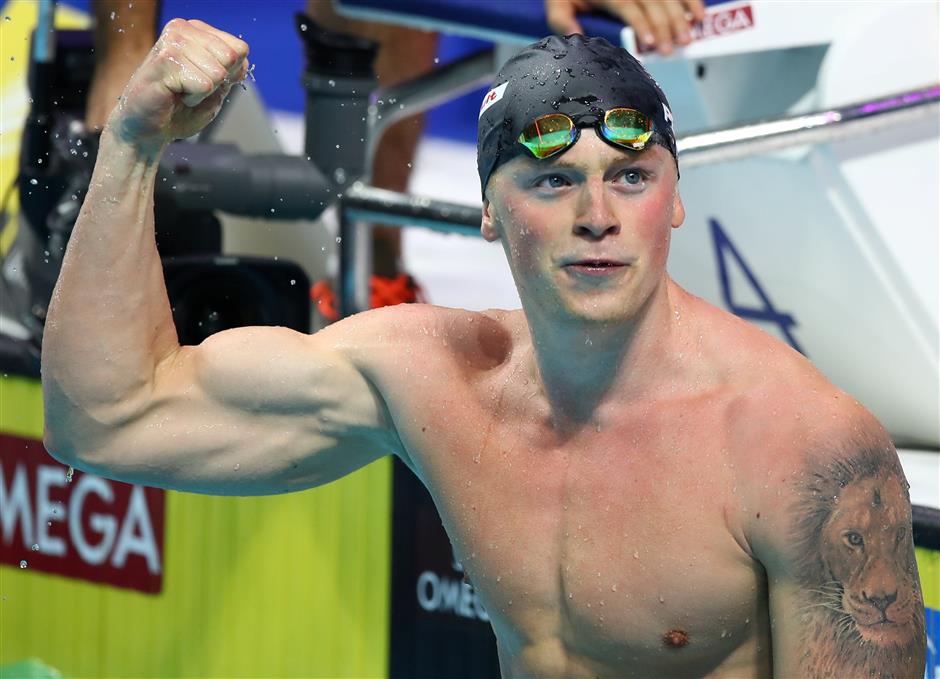 Adam Peaty of Britain reacts after winning the men's 50-meter breaststroke final at the FINA world championships in Budapest, Hungary, on July 26, 2017.

Kosuke Kitajima believes the men's 200 meters breaststroke final will be "one of the biggest races to watch" at the Tokyo Olympics if Britain's Adam Peaty steps up to take on a dual Japanese challenge at the distance.

Breaststroke master Kitajima secured Japan's legacy in the discipline when he won gold in the men's individual 100 and 200 at back-to-back Olympics in 2004 and 2008.

The 34-year-old retired after failing to qualify for Rio but was present on Friday as Yasuhiro Koseki and Ippei Watanabe won world championship silver and bronze, respectively, in the longer distance.

"Once I left swimming and the two Japanese boys came up and did well, that was a source of pride for me," Kitajima said.

"It's the first time they medalled at an international competition and great for their confidence. It makes me incredibly happy and for me it's really about what the actual time will be when Tokyo comes."

With their 200 prospects enhanced in Budapest, the Japanese duo could now face one of swimming's hottest talents in the run-up to the 2020 Tokyo Games.

Peaty won 50 and 100 individual gold in Budapest and hinted that he would start to focus seriously on the 200 during this Olympic cycle, saying he was ready to "branch out".

"The long term goal is Tokyo," he told British media. "I don't want to jeopardize anything but I don't think it will be too hard and I won't have to change my training."

The branching out could start as early as December when the 22-year-old Briton is likely to compete in the Commonwealth Games trials.

"If he does swim in the 200 then that is something Japanese fans can look forward to. I don't think we have a chance in the 100, but maybe in the 200. It will definitely be one of the biggest races to watch."

Watanabe, who owns the 200 breaststroke world record, underlined the symbolic importance of the event after winning his Budapest bronze.

"It is supposed to be a big strong point of Japanese swimming," the 20-year-old said.

"I didn't medal at Rio and I feel the need to medal now. I want to be the Adam Peaty of the 200 breaststroke."