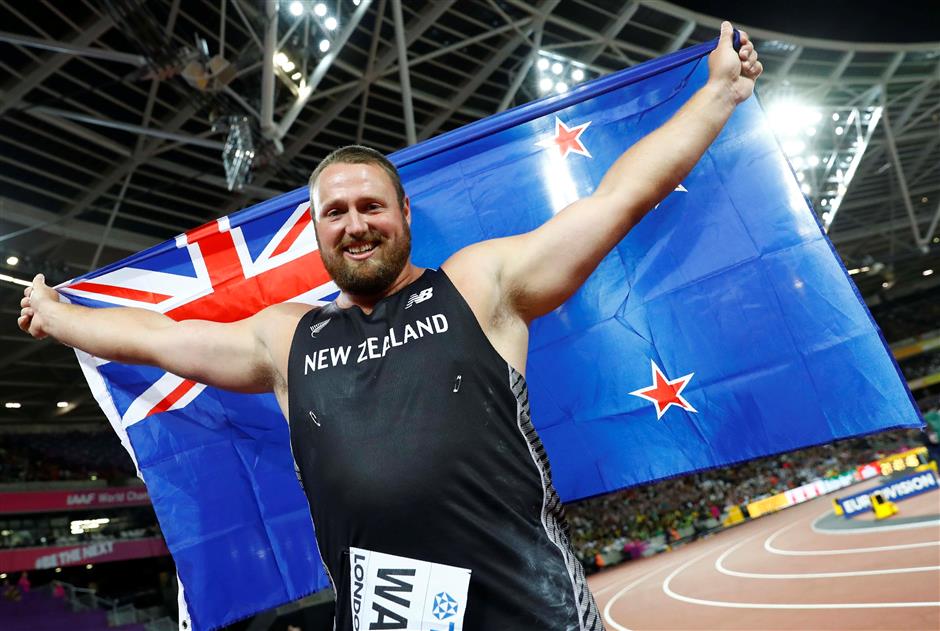 Tomas Walsh of New Zealand celebrates after winning the men's shot put final at the world championships in London on August 6, 2017.

Having watched compatriot Valerie Adams dominate women's shot put for a decade Tomas Walsh struck a blow for New Zealand's men on Sunday when he took gold at the world championships with a superb series of throws.

Adams has won four world titles and two Olympic golds but Walsh's medal was the first of any hue for a New Zealand man at the worlds, coming a year after he won Olympic bronze in Rio.

Walsh was already guaranteed gold on Sunday thanks to his third-round put of 21.75 meters but finished with a flourish by hurling the weight 22.03 meters on his final attempt.

All six efforts were well over 21 meters in a remarkable display of consistency.

He did have a scare, though, when American Joe Kovacs thought he had snatched victory to retain his title with his last attempt which was measured at 22.08 meters.

It was ruled as a foul, however, with Kovacs adjudged to have put his foot on the top of the throwing circle perimeter.

The United States team appealed against the decision but it was overturned.

Kovacs took silver with his third attempt of 21.66 and bronze went to Stipe Zunic of Croatia with 21.46. It was the first senior medal for the 26-year-old, who celebrated by rolling on the infield of the London Stadium.

"It was a hell of a competition out there. It's awesome. It's something I've always dreamed about, being a world champion," Walsh said.

Zunic's bronze medal was all the more impressive as it came only three years after he took up the event.

"I did javelin before, I was ready for London 2012 as a javelin thrower but I suffered from a shoulder injury so I could not continue," he said.

"This is amazing when I am among these big guys. I was 13th coming to this competition but I managed to handle this pressure well."