Jets WR Enunwa out for season 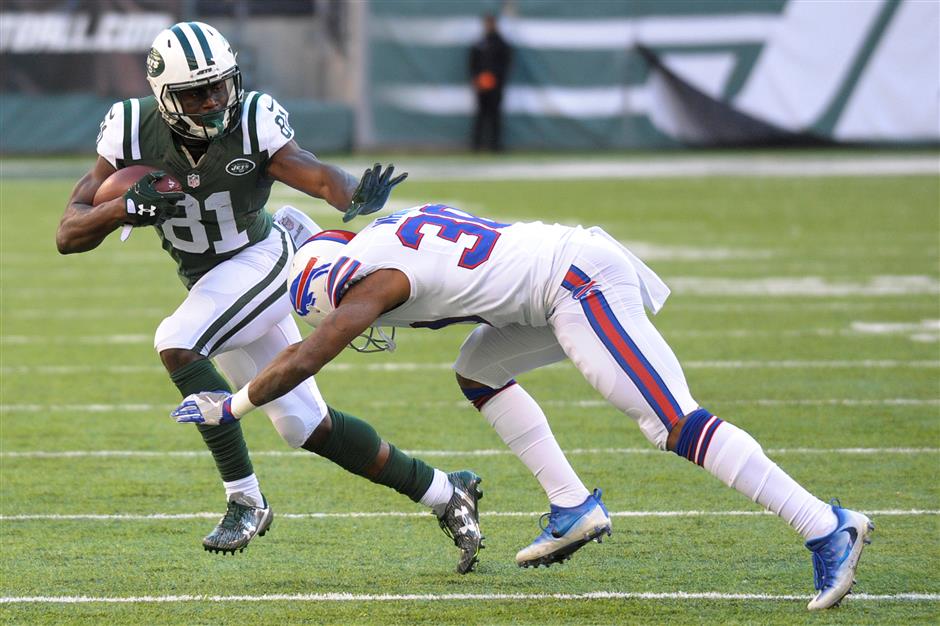 New York Jets wide receiver Quincy Enunwa (left) runs with the ball as Buffalo Bills cornerback Corey White makes the hit during their NFL  game in East Rutherford, New Jersey, in this January 1, 2017, photo. Enunwa has a bulging disc in his neck that will likely require surgery and sideline him for the entire season.

The New York Jets will be without their top wide receiver for the season.

Quincy Enunwa will be placed on injured reserve with a bulging disk in his neck that will likely require surgery, with a recovery time of 6 to 9 months. Coach Todd Bowles said on Monday that Enunwa will seek a second opinion, and the injury is not considered career-threatening.

"They said it wasn't, but going forward, we'll see," Bowles said. "They said he should come out OK."

Enunwa, projected as the Jets' No. 1 receiver, was hurt on Saturday night during practice at MetLife Stadium in Florham Park, New Jersey. Bowles said the injury initially appeared similar to the one that held Enunwa out during spring workouts.

With Brandon Marshall and Eric Decker cut during the offseason, it appeared Enunwa would be given the opportunity to lead an inexperienced receiving corps. He has 80 career catches for 1,172 yards and four touchdowns over two seasons.

"He was a big part of it," Bowles said of Enunwa's role on offense. "Our young guys are just going to have to grow up fast."

After Enunwa, the Jets' most-experienced receiver is Marquess Wilson, who had 56 career catches for 777 yards and three TDs in four seasons in Chicago. Next is second-year receiver Robby Anderson, who made the team last summer after being an undrafted free agent and finished with 42 catches for 587 yards and two scores.

That could prompt the Jets to scour the waiver wire or look into some unemployed veterans to help fill what might be the biggest void on the team — other than having yet to determine a starting quarterback.

"We'll look into it and see how our young guys develop, but we'll have our eyes open and see what's out there," Bowles said, later adding that "all options are open."

Enunwa was drafted in the sixth round out of Nebraska in 2014 and steadily improved to become a key part of the Jets' passing game. Last year was a breakthrough season, when he finished tied for second on the team with 58 receptions — one fewer than Marshall — and led the Jets with 857 yards receiving and four TD catches.

Bowles said Enunwa had tests in the spring while dealing with the initial injury, but was healthy and everything appeared fine until Saturday night.

"When he fell, it just flared up again," the coach said.

Bowles is uncertain as to how Enunwa was hurt in the offseason, but said it wasn't a bulging disk at that time.

"It's something that comes and goes," Bowles said. "It was just a tingling feeling and he didn't feel well. We rested him in the spring, and he came back and he fell down and I guess it reoccurred."