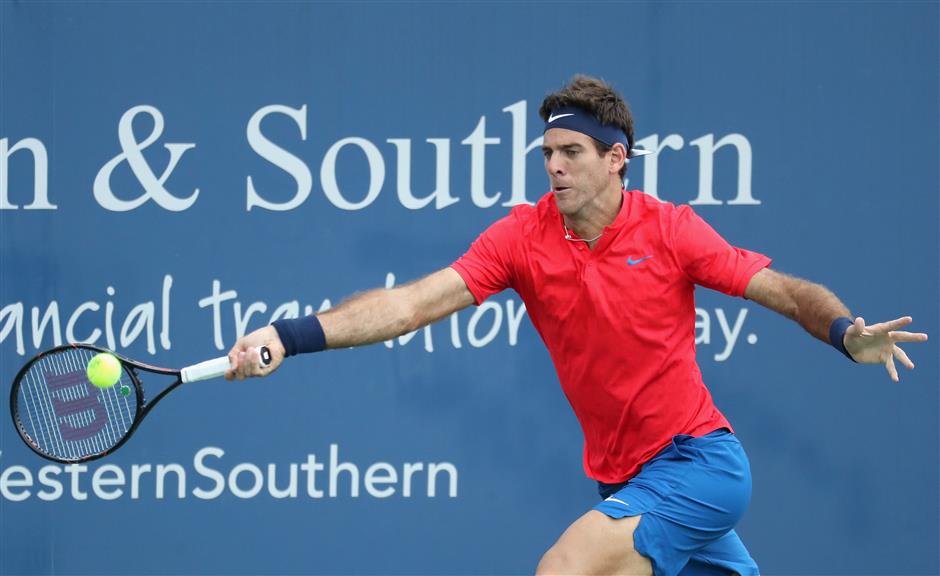 Juan Martin Del Potro returns a shot to 10th-seeded Tomas Berdych of the Czech Republic during their first-round match at the Western and Southern Open in Mason, Ohio, on August 15, 2017. The Argentine won 3-6, 7-6 (1), 6-0.

Injuries and upsets are wrecking the men's side of the Western & Southern Open.

On Tuesday, Milos Raonic became the seventh player ranked in the top 10 to withdraw from the tournament, right before fellow seeded players David Goffin, Tomas Berdych and Jack Sock were knocked out in first-round matches.

Del Potro shook off a first-set loss, jumping out to a 4-1 lead in the second set before settling for a win in the tiebreak, which he led 5-0 and clinched with an ace. He built on his momentum by rolling through the third set against the Wimbledon semifinalist, improving to 12-0 in first-round matches this season.

Berdych was playing his first match since withdrawing from last week's Rogers Cup in Montreal with a rib injury.

Sugita clinched his win by breaking Sock with a shot that clipped the baseline, a call that was confirmed by review.

"I tried to make a serve and the first shot is the most important thing," Sugita said. "I tried to go into the net and be aggressive on the court."

The ninth-seeded Goffin became the first seeded man to be knocked out in Cincinnati, falling to Nick Kyrgios, 2-6, 3-6. Kyrgios will meet qualifier Alexandr Dolgopolov in the second round after Dolgopolov defeated Kevin Anderson 6-4, 7-6 (6). Also, Karen Khachanov beat Diego Schwartzman 6-1, 1-6, 6-3.

Eleventh-seeded Pablo Carreno Busta and 14th-seeded John Isner managed to avoid the rash of upsets. Carreno Busta ousted Paolo Lorenzi 6-3, 6-3. The hard-serving Isner won 93 percent of his first serves and uncorked 16 aces while building a 30-9 lead in total winners while defeating wildcard Tommy Paul 6-3, 6-3 to become the first man in the third round.

Ivo Karlovic joined him there with yet another upset, pulling out a 6-4, 7-6 (9) win over eighth-seeded Jo-Wilfried Tsonga.

On the women's side, second-seeded Simona Halep and seventh-seeded Johanna Konta became the first players to reach the third round of this US Open warmup. Halep dispatched qualifier Taylor Townsend 6-4, 6-1, while Wimbledon semifinalist Konta beat Kiki Bertens 6-3, 6-3.

Ninth-seeded Venus Williams cruised into the second round, needing just 66 minutes to dispatch fellow American Alison Riske 6-2, 6-0. Williams will next face Ashleigh Barty, who beat Varvara Lepchenko 6-4, 6-4 in a matchup of two qualifiers.

"I hadn't played in a while, so I wasn't really sure what to expect," said Williams, the Wimbledon finalist who lost in the round of 16 last week at the Rogers Cup in Toronto. "I know she likes a flat ball and is a retriever and is just feisty, and the courts are really slow, too. Today was like about being measured and being patient and trying to just capitalize on the match."

Another qualifier, Aleksandra Krunic, advanced with a 6-4, 6-2 upset of 12th-seeded Jelena Ostapenko, while 10th-seeded Agnieszka Radwanska was knocked out by unseeded Julia Goerges 4-6, 4-6.

The sixth-seeded Raonic withdrew from the Masters series tournament because of a left wrist injury, tournament officials said.

No. 3 Roger Federer and No. 9 Kei Nishikori withdrew on Monday, the first full day of matches. No. 1 Andy Murray, No. 4 Stan Wawrinka, No. 5 Novak Djokovic and No. 6 Marin Cilic — the defending champion — withdrew before the tournament started. No. 2 Rafael Nadal, the top-seeded player, remains in the draw and will return to No. 1 when new ATP rankings are released on August 21.