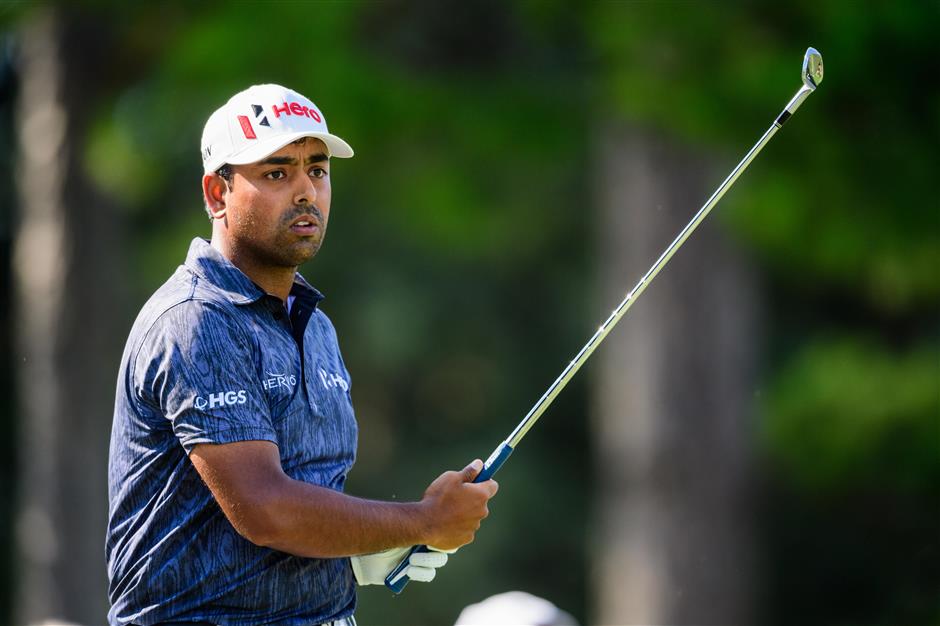 Anirban Lahiri of India in action during the third round of the Wyndham Championship at Sedgefield Country Club in Greensboro, North Carolina, on August 19, 2017.

Phil Mickelson was selected as a captain pick for the second straight Presidents Cup, extending a remarkable streak of playing on 23 consecutive United States teams.

Anirban Lahiri of India will play for the second time, and it might be just as meaningful.

US captain Steve Stricker used his two picks on Wednesday on Mickelson and Charley Hoffman, who finished a fraction of a point out of the top 10 automatic qualifiers in the final week. It will be the first team competition for the 40-year-old Hoffman.

Mickelson was in danger of missing his first Presidents Cup or Ryder Cup since 1993. He hasn't won a tournament since 2013, and he hasn't seriously contended this year while finishing 15th in the standings. Stricker had said he wanted the five-time major champion to show him something, and the 47-year-old Mickelson delivered at the TPC Boston with all four rounds in the 60s to tie for sixth.

"I've been talking to him quite frequently, and he said it was just a matter of time," Stricker said. "He waited all the way till the end, but had a great showing at the Dell Technologies Championship last week. I got reports from the other players that it was the Phil of old."

International captain Nick Price took Emiliano Grillo, who finished 11th in the standings. The surprise was his choice of Lahiri over Hideto Tanihara of Japan, who took Dustin Johnson to the 18th hole in the semifinals of the Dell Match Play in March but hasn't performed well since then.

Price, however, said he wanted experience on a team with four newcomers, and he wanted players to compete primarily on the PGA Tour. And with Lahiri, this Presidents Cup becomes more personal.

The International team was on the verge of winning for the first time since 1998 when Lahiri had a 4-foot birdie putt on the last hole. Chris Kirk made a 15-foot birdie putt, and Lahiri's putt to halve the catch caught the right lip and spun out. He dropped his putter and stared in disbelief with his hand covering his mouth.

Now, he gets another crack at it.

"That experience is really going to help me," Lahiri said. "Obviously, I feel there's some unfinished business. I'm motivated to go out there and make a positive contribution to the team."

The matches start on September 28 at Liberty National in New Jersey, where Mickelson has a corporate membership.

It has been a lopsided series from the start in 1994 — Mickelson was a captain's pick that year, too — with the International team of players from every country outside the US except for Europe losing every time except for 1998 at Royal Melbourne and the tie in South Africa in 2003.

"I think the challenge will be a little overconfidence," Stricker said.

Stricker said choosing Hoffman was easy. While he hasn't won this year, Hoffman went into the back nine of two majors (Masters, US Open) with a chance to win, along with a World Golf Championship in Ohio. He was in the top 10 until Monday at the TPC Boston, when Kevin Chappell moved ahead of him by 0.073 points.

Mickelson was No. 30 in the standings two years ago when he was a captain's pick. This time, he was at No. 15, but there was not a sense that Stricker took him over another player more deserving because no one around Mickelson in the standings had stood out over the last few months.

Plus, Mickelson's biggest support comes from the New York area, and he's a favorite in the team room.

"What means a lot this year is the players and captains wanted me on the team," Mickelson said. "I really love being around these guys."

Mickelson went 3-0-1 in his matches two years ago in South Korea. His overall record is 23-16-12, and one more victory would allow Mickelson to tie Tiger Woods for most in the Presidents Cup.

This is the first time since 2007 that every player on the International team has a full PGA Tour card. Lahiri has been on the PGA Tour the last two years, and was a runner-up at the Memorial in early June. Grillo was the PGA Tour rookie of the year in 2016 and remains close to US players from his age group, such as Jordan Spieth, Justin Thomas and Daniel Berger.