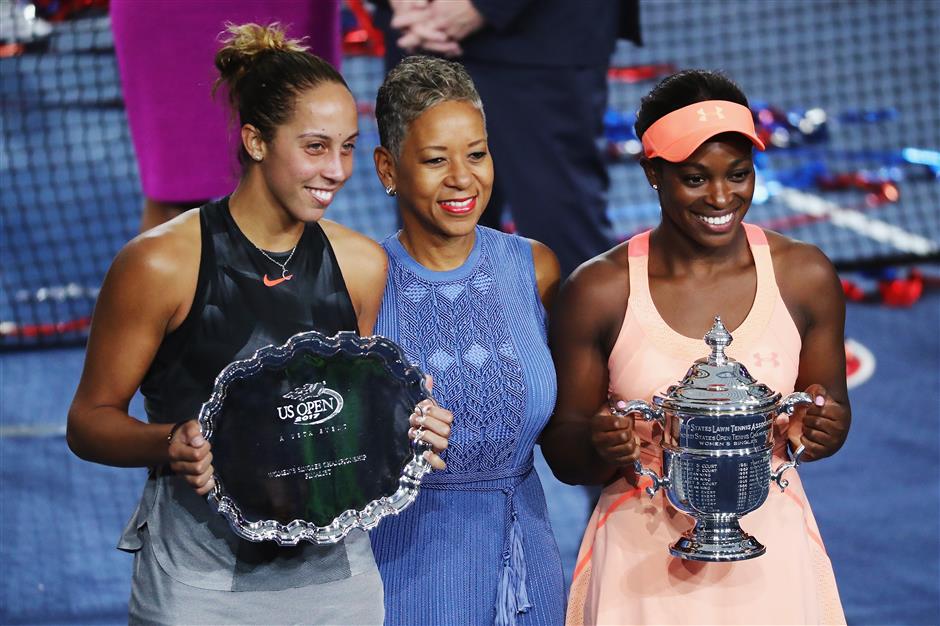 From left: Madison Keys, USTA President Katrina Adams, and Sloane Stephens pose after the women's singles final of the US Open at the USTA Billie Jean King National Tennis Center in New York on September 9, 2017. Stephens won the all-American final 6-3, 6-0.

Sloane Stephens may have hoisted the US Open trophy on Saturday with her defeat of Madison Keys but American tennis was the big winner at the year's final grand slam.

With American women sweeping the semifinals to guarantee a home-grown winner, it has been a giddy fortnight for the United States Tennis Association.

The results were not nearly as positive on the men's side where 15th seed Sam Querrey, the last American, was beaten in the quarterfinals by Kevin Anderson, who will play for the title against Rafael Nadal on Sunday.

But the good news far outweighed the bad from the USTA's perspective.

"We knew the time would come and we just needed to be patient and the time did come," USTA executive director Gordon Smith said.

"It's been a great week for US tennis, we have known for a long time we have a great new generation of young women players, really they are following in the footsteps of Venus and Serena (Williams).

"It's beautiful to see.

"And we have a bunch of young men who are right behind them."

In recent years, the final weekend at a US Open has included an unpleasant post-mortem constructed around the question: "What's wrong with American tennis?"

This year, Keys could try to explain what's gone right.

"We both have trophies today so I guess that says a lot," said the 22-year-old runner-up after her 3-6, 0-6 thumping from Stephens.

"I think American tennis is in a really good place right now ... I guess you could say, is really great."

Things indeed look brighter than they have for a long time.

Keys, Stephens, CoCo Vandeweghe and Venus Williams became the first US women to sweep all semifinal spots at a grand slam since Wimbledon in 1985.

Keys and Stephens also became the first Americans not named Venus or Serena Williams to feature in a grand slam final since Lindsay Davenport lost to Venus at Wimbledon in 2005.

For those paying attention, the next wave of American players were revealing themselves on the outside courts of the Billie Jean King National Tennis Center.

With victory, Gauff would become the third youngest grand slam girls' champion after Swiss Martina Hingis, who was 12 when she won the 1993 French Open, and compatriot Jennifer Capriati, the 1989 French Open winner at 13 years, three months.