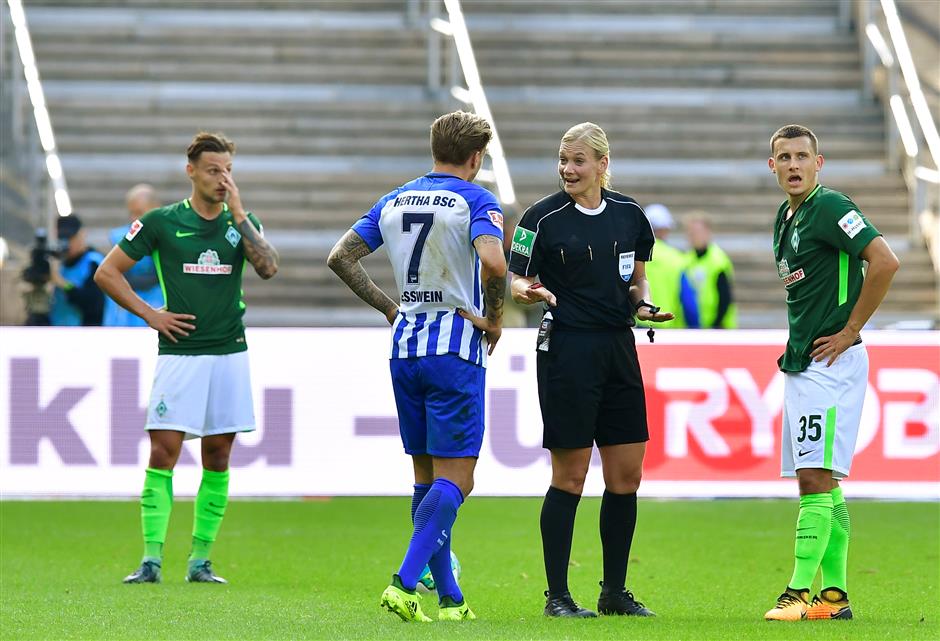 Referee Bibiana Steinhaus has words with Hertha Berlin midfielder Alexander Esswein and Werder Bremen midfielder Maximilian Eggestein during their German Bundesliga match at the Olympic Stadium in Berlin on September 10, 2017. The match ended 1-1.

Germany's Bibiana Steinhaus made history on Sunday by becoming the first female referee to officiate a match in a top European league.

The 38-year-old police officer became the first woman to ref a top-tier match in the German, English, French, Italian or Spanish leagues when she took charge of Hertha Berlin's home Bundesliga match against Werder Bremen.

Having been named on the official list of Bundesliga referees for 2017/18, Steinhaus sat out the first two rounds of German league matches before making her top-tier debut at Berlin's Olympic Stadium.

She has been refereeing since 2007 and officiated the women's Champions League final this year plus the 2012 women's Olympic tournament final in London.

Steinhaus had already built up a wealth of experience by refereeing around 80 second division games and was the fourth official on numerous occasions in the German league, but this is her first time refereeing in Germany's top flight.

Both games involved controversy as Bayern protested angrily about Uth's first goal in Hoffenheim's 2-0 win, claiming that two balls were on the pitch at the time, while Freiburg had Yoric Revet dismissed after 29 minutes of its 0-0 draw when the referee changed his mind on the advice of the video assistant.

Hoffenheim took the lead against the champion in the 27th minute when Andre Kramaric caught Bayern unawares with a quick throw-in to Uth who scored from the edge of the area.

Bayern protested that a second ball, which its defender Mats Hummels had hoofed upfield after it went out of play for the throw-in, was on the pitch at the time, albeit down the other end.

Uth struck again early in the second half, firing a left-foot shot past Manuel Neuer from Steven Zuber's pass to complete an unhappy evening for the Bavarians.

Dortmund looked set to chalk up its 13th successive win over Freiburg after the Black Forest team had attacking midfielder Ravet sent off 29 minutes into his debut for a tackle from behind on Marcel Schmelzer, who had to go off injured.

But despite spending most of the remaining hour camped in the Freiburg half, Peter Bosz’s side was unable to find a way past the well-drilled hosts who themselves remained winless after three games.

Dortmund forward Pierre-Emerick Aubameyang had the ball in the net in the second half but the referee had already blown for a free kick for the visitors.

Until the red card, Freiburg had looked slightly more dangerous and striker Tim Kleindienst missed the best chance of the game when he was put clean through but shot straight at Roman Buerki.

“A draw was too little, considering the quality in our team,” said Bosz.

Dortmund, which has still not conceded a goal this season, and Hoffenheim have seven points from three games, alongside Hanover 96, which drew 1-1 away to VfL Wolfsburg, while RB Leipzig, Bayern and Hamburg SV have six.

Daniel Didavi gave Wolfsburg the lead early in the second half but Martin Harnik leveled for Hanover.

Alfred Finnbogason scored a hat-trick, including a penalty, to give Augsburg a 3-0 win over FC Cologne which slumped to its third straight defeat.

He became the third Icelandic player to score a Bundesliga hat-trick after Atli Edvaldsson and Eyjolfur Sverrisson.

Kevin-Prince Boateng's goal gave Eintracht Frankfurt a 1-0 win at Borussia Moenchengladbach although the former Ghana international went off injured early in the second half.

Mainz 05 beat Leverkusen 3-1 to pick up its first win of the season — its first under new coach Sandro Schwarz.