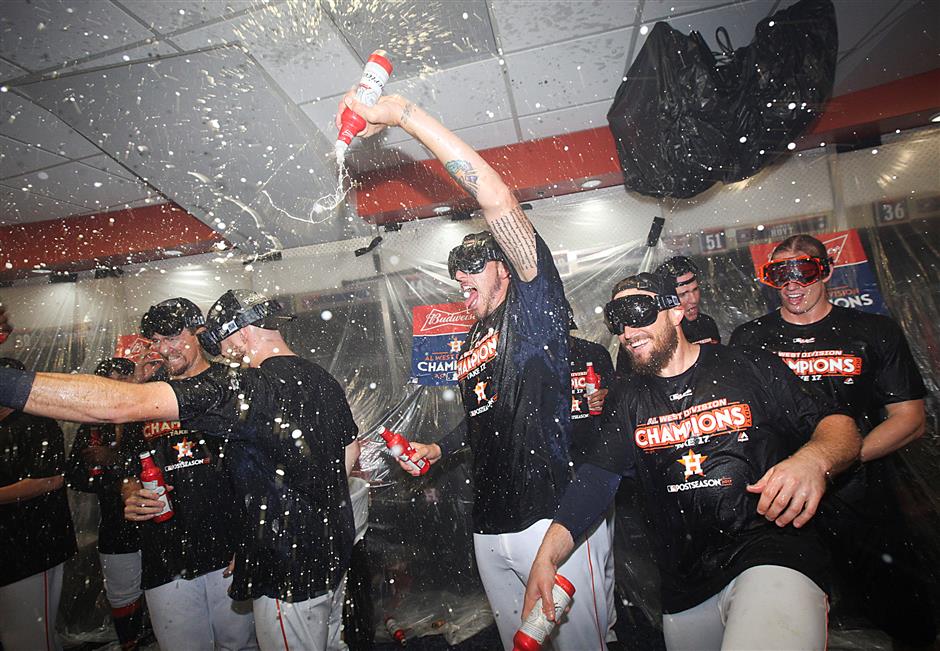 The Houston Astros celebrate in the locker room after defeating the Seattle Mariners 7-1 in the MLB game to clinch the American League West title at Minute Maid Park in Houston, Texas, on September 17, 2017.

When the Houston Astros traded for Justin Verlander less than three weeks ago, they envisioned days like this.

Verlander struck out 10 batters over seven innings in his first home start for Houston, Derek Fisher and Marwin Gonzalez homered in a big fifth inning and the Astros clinched the American League West with a 7-1 win over the Seattle Mariners on Sunday.

"The story is almost too good to be true," manager AJ Hinch said. "We trade for him for this exact reason to come up in big moments. He was locked in from the very beginning. Nobody better to have on the mound and nobody better to celebrate with."

The Astros acquired the ace from Detroit on August 31, just minutes before the deadline for players to be eligible for postseason play. He had made two starts on the road before his Minute Maid Park debut.

George Springer and Carlos Correa also homered for the Astros, who won their first division title since 2001 and seventh overall. The Astros become the first team in Major League Baseball history to win titles in three divisions after previously winning the National League West and NL Central.

As the Astros celebrated Sunday's accomplishment, they were quick to target a strong finish to the regular season to try and secure home-field advantage in the postseason by finishing with the best record in the AL. Houston led the AL for most of the season, but Cleveland moved ahead with its recent 22-game winning streak.

Houston has reached the postseason three times as a wildcard team since last winning its division in 2001 — with a team that included Seattle manager Scott Servais. The Astros will return to the playoffs for the second time in three seasons after ending a 10-year postseason drought in 2015.

Owner Jim Crane, who bought the team in 2011 and oversaw rebuilding, reveled in the celebration.

"I had a little tear in my eye," he said. "This has been a long time coming."

For the few players still on the team who endured the really lean years, winning this first division title in 16 years was even more special.

"It means a lot because I was here when we lost 100 games three years in a row," Jose Altuve said. "Now I'm part of some winning teams and that means a lot to me."

Verlander (13-8) retired his first seven batters before Ben Gamel homered into the right-center bullpen in the third. He allowed just two singles after that to improve to 3-0 with a 0.86 ERA since the trade. Verlander walked one and raised his strikeout total with Houston to 26 in three games.

"We knew we were going to have to keep it close because we probably weren't going to get a lot off Verlander," Servais said. "Obviously, he was really good again today."

Houston had trouble stringing hits together until the fifth inning, when Yuli Gurriel singled and Fisher homered to straightaway center off Andrew Moore (1-4) for a 2-1 lead.

Springer singled and Moore got two outs before being replaced by James Pazos. Gonzalez sent his fourth pitch off the wall in left field for his 22nd home run to make it 4-1.

Springer hit his 32nd homer, a solo shot in the seventh off Emilio Pagan. Correa made it 7-1 later in the inning with a two-run homer.