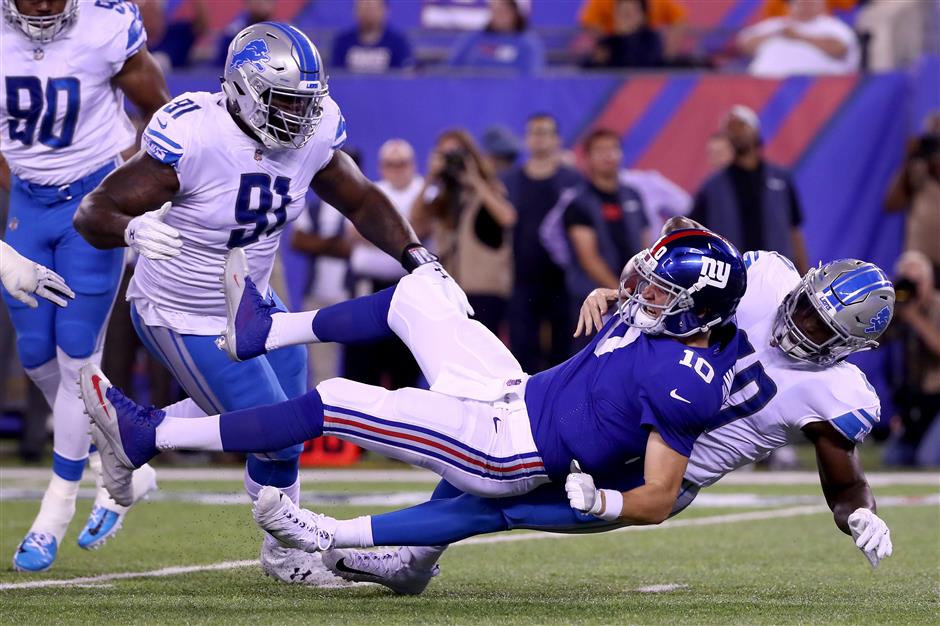 Jarrad Davis (right) of the Detroit Lions sacks New York Giants quarterback Eli Manning in the first half of their NFL game at MetLife Stadium in East Rutherford, New Jersey, on September 18, 2017.

So far, so good for Matthew Stafford and the Detroit Lions. Eli Manning and the New York Giants are heading in the opposite direction.

"We did a nice job of getting in the end zone early and our defense did what they do," Stafford said.

Stafford found Marvin Jones for a 27-yard TD in the first quarter and passed to Eric Ebron for a go-ahead 7-yarder in the second. Matt Prater added a 56-yard field goal just before halftime that bounced off the upright, helping the Lions to a 17-7 lead at the break.

Ezekiel Ansah had three sacks as Detroit joined Atlanta and Carolina as the only unbeaten teams in the NFL through Week 2. The Lions made the playoffs last season, but finished the year with four straight losses.

Beckham, a three-time Pro Bowler who missed the season opener, had four catches for 36 yards in limited action.

Manning threw an 18-yard TD pass to Evan Engram on the first play of the second quarter, but the rookie tight end was called for unsportsmanlike conduct for a seemingly obscene gesture. It allowed the Lions to get the ball at the Giants 45 after the kickoff went out of bounds and Stafford drove them for a second score.

New York closed to 17-10 on Aldrick Rosas' 25-yard field goal early in the second half, but it wasted a chance for a TD. The Giants had first-and-goal at the 1 and then got pushed back to the 11 on a holding penalty on a first-down run.

"We talked about playing complete, complimentary football. By no stretch of the imagination did we do that tonight," said Ben McAdoo, who led the Giants to their first playoff berth since 2011 last season in his first year as head coach. "We've got to do better. We've dug ourselves in a hole. No one feels sorry for us. We've got to find a way to get better and get better in a hurry."

Agnew then helped clinch the game for Detroit with his big return with 12:56 left, faking out New York punter Brad Wing on his way to the end zone. It was the fifth-longest punt return in team history.

Manning was 22 for 32 for 239 yards for New York, while Stafford was 15 for 21 for 122 yards. The NFL's highest-paid player threw for four TD in Detroit's season-opening victory against Arizona.