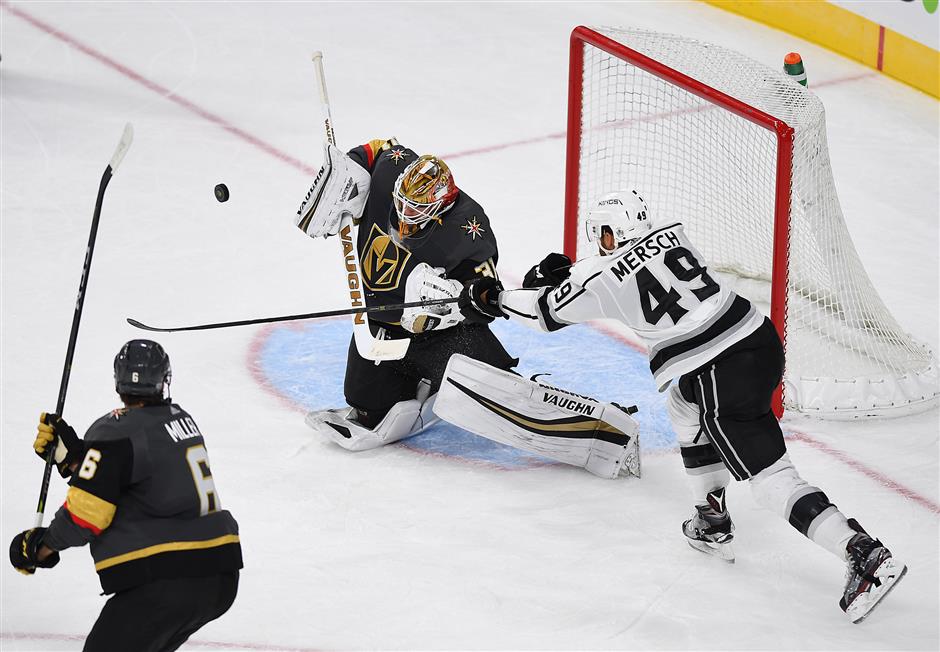 Vegas Golden Knights goalie Calvin Pickard makes a blocker save as Los Angeles Kings forward Michael Mersch looks for a deflection during their preseason NHL game at T-Mobile Arena in Las Vegas, Nevada, on September 26, 2017. The Knights lost 2-3 in overtime.

The Vegas Golden Knights have molded a rag-tag bunch of experienced veterans and promising picks from two drafts into the National Hockey League's first expansion team in 17 years.

And while wins might be in short supply at times in their debut season, the Knights are not going to roll over and play dead for their opponents either, says general manager George McPhee.

"We are not interested in being anyone's doormat," McPhee said.

On Tuesday, the Knights played their first ever home game at the new T-Mobile Arena on the strip, losing 2-3 in overtime to the Los Angeles Kings in an exhibition game.

They are Las Vegas's first major professional sports team and the NHL's first expansion team since 2000, when Columbus and Minnesota increased the number of teams to 30.

McPhee says it is not easy starting a team from scratch but they have done a good job in a short period of time.

The key to success will be developing young players and getting leadership from the veterans.

"Lots of people have a five-year plan but it changes every day. Our philosophy is to be as good as we can as quickly as possible."

That feeling is echoed by American business tycoon Bill Foley, who heads a consortium that paid the US$500 million expansion fee.

Foley says it won't take long to make the Knights a contender and insists they will win the Stanley Cup in six years.

The Knights are already off to a strong start as they have a 3-2 record in the preseason.

Coach Gerard Gallant said his job is to get the most out the players he has available each night and not look too far down the road.

"Coaches don't have five-year plans," said Gallant, who guided the Florida Panthers last season before being fired in November. "They hired me to win hockey games. My job isn't to go get a high draft pick. My job is to go out there and try to win every day."

Foley's group was awarded the expansion team in June 2016, after a season-ticket drive a year earlier that garnered 5,000 clients in the first 48 hours.

The team was compiled through a one-off expansion draft which allowed Vegas to select one player from all 30 NHL teams.

McPhee also swung a few deals with other teams and looked for free agents to sign.

"The coaches and management did a great job putting together this group of guys," said defenseman Jason Garrison, of White Rock, Canada.

Rookie forward Tyler Wong, 21, is typical of the diamond in the rough that McPhee is trying to find.

Fresh off his final season of junior with the Lethbridge Hurricanes, Wong scored the Knights first preseason goal against the Vancouver Canucks then added two more and an assist for a dynamic four-point night in his NHL preseason debut.

"He played 12 minutes. Must have been bad coaching because he probably should have played more with four points," Gallant joked the morning after the game.

"To score that first goal was something special," said Wong, who was one of eight players assigned to the Knights' Chicago Wolves farm team on Tuesday. "I have no expectations; just go into every practice and game trying to get better."