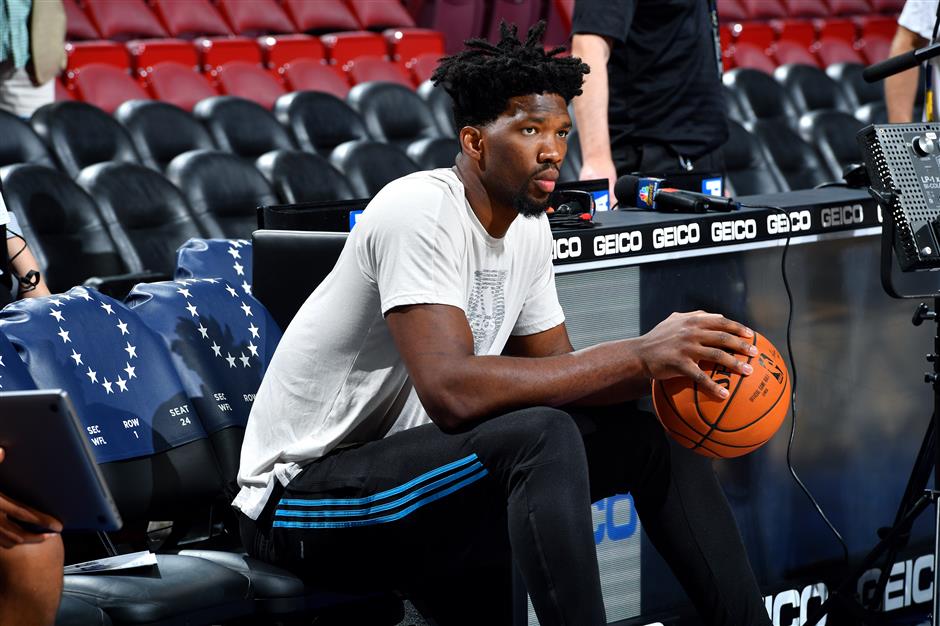 Joel Embiid of the Philadelphia 76ers looks on before the NBA preseason game against the Memphis Grizzlies at Wells Fargo Center in Philadelphia, Pennsylvania, on October 4, 2017.

Philadelphia 76ers center Joel Embiid sealed a five-year contract extension on Tuesday, with the injury-plagued Cameroon-born star saying he hoped to finish his career with the team.

The 76ers did not confirm the financial terms of the deal but several US media outlets reported that Embiid stands to earn US$148 million over the course of the extension.

If confirmed, it would mean Embiid, 23, is being paid the maximum allowed under the rookie wage scale, having played only 31 games over three seasons.

Embiid missed the first two seasons after being drafted in 2014 and suffered a knee injury last season which meant he only played 31 games.

"Joel Embiid is a transformative young talent that you rarely come across in our game," 76ers president of basketball operations Bryan Colangelo said in a statement.

"Joel is only scratching the surface, but he has all the potential and promise to go down as one of the all-time greats to wear a Sixers jersey. Ownership's willingness to extend this contract reflects our collective belief in Joel Embiid and a reinforced commitment to building a championship-level basketball program."

Embiid scored 20 or more points in 19 of 31 games last season before suffering a knee injury in January that required surgery.

"I'm so thrilled to be in this position," Embiid said in a statement.

"I want to thank ownership, management, the coaches and most of all the fans, for supporting me throughout this whole process. I love this city and I'm so, so, so, so excited to be spending my next five years here and hopefully the rest of my career, God willing. Trust 'The Process'."

Embiid had adopted "The Process" as a nickname and was introduced as such as part of the pregame lineup festivities. Embiid waves his arms and exhorts fans to get louder as they chant "Trust the Process!", The Associated Press reported.

The Sixers are counting on Embiid and No. 1 overall picks Ben Simmons and Markelle Fultz to carry the team from the bottom of the league into an Eastern Conference playoff team.

The Sixers will surely be protected in the deal if Embiid continues to deal with injuries that have him more on track to become the next Greg Oden instead of the next Anthony Davis.

But the flashes of brilliance have convinced Colangelo and ownership that Embiid was worth the risk.

"In the time that he has been on the floor, we have seen him change completely the gym," coach Brett Brown said. "He does it with just his physical presence. He does it with a defensive mindset. And he does it with an offensive target that's different than anything else we have."

He didn't pick up a basketball until a few years ago, when a friend informed him that very few 7-footers succeed in soccer. A couple months later, Embiid was lured to a basketball camp in the capital of Yaounde run by NBA veteran Luc Mbah a Moute, one of just two players from Cameroon to have played in the NBA.

Mbah a Moute persuaded Embiid's parents to let him move 6,000 miles to Florida, and helped enroll him at Montverde Academy, one of the best high school programs in the country.

He played just 28 games in his lone season at Kansas and 31 in three years with the Sixers — 59 games that matter in four years, worth US$148 million and counting.