Supamas leads by 2 shots in Xiamen 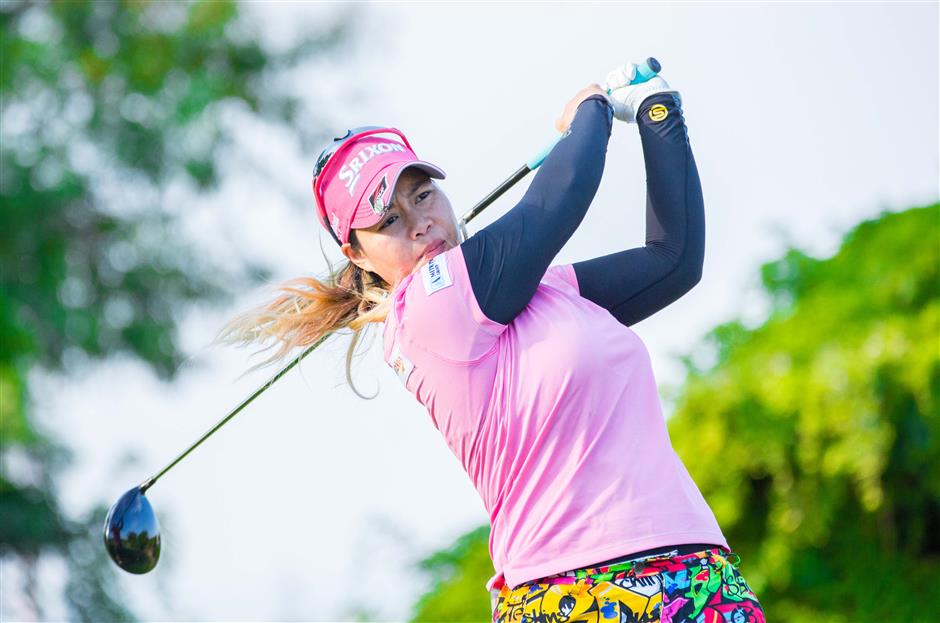 Thailand's Supamas Sangchan in action during the first round of the Xiamen Orient Masters at the Orient (Xiamen) Golf Country Club in southeast China's Fujian Province on October 12, 2017.

Supamas Sangchan put herself in contention for her second China LPGA Tour victory of the year on Thursday when the Thai fired a 6-under-par 66 for a two-stroke lead in the opening round of the Xiamen Orient Masters in southwest China's Fujian Province.

Chinese amateur Liu Wenbo was equal second with Thais Prima Thammaraksa and Budsabakorn Sukapan at the Orient (Xiamen) Golf Country Club. Another Thai Parinda Phokan was fifth after a 69.

Supamas, winner of the EFG Hong Kong Ladies Open in June, played flawless golf in the sunny but windy conditions through 17 holes, reeling off seven birdies before closing with a bogey five at the 375-yard last.

“Today I just plan to play my game because before this week I have no confidence, no feeling with my shots. But today my shots are perfect and I had very good putting, the feeling comes back today,” said the 21-year-old Sukhothai native.

“It's windy today but I have played in Scotland, the wind is much stronger than here. Today's wind is okay for me. The golf course is not too long and there are lots of chances to get birdies. It's pretty nice, I love it here.”

Beijing native Liu credited her five birdies to her ability to get her ball near the hole. Despite being critical of her wedge play, she said her putting and driving were solid, save for a bogey four at the 140-yard 12th hole.

“The best hole, I think, is hole six (405 yards) where I saved par. I shot to the right near the trees because of the wind. The second shot I made a mistake about the distance and shot too much. The ball went over the green to the trees again. On a difficult slope I chipped the ball very well to half a yard and parred the hole. It was so difficult that I was happier than when I got a birdie,” said the 16-year-old.

Top of the leaderboard

In Incheon, South Korea, US Women's Open champion Park Sung-hyun closed with a pair of birdies to join Minjee Lee and Kim Min-sun at the top of the leaderboard on 6-under after the first round of the LPGA's US$2-million KEB Hana Bank Championship on Thursday, Reuters reported.

World No. 2 Park, playing in the marquee group alongside top-ranked South Korean compatriot Ryu So-yeon and No. 3 Lexi Thompson, carded six birdies in a bogey-free round at the SKY72 Golf and Resort, west of Seoul.

American Thompson ended the day three strokes back after a 69 while world No. 1 Ryu carded an even-par 72. Australia's Lee, meanwhile, offset two bogeys with eight birdies, while Korean Kim finished her round with five straight birdies.

Park has enjoyed an incredible rookie season in the United States and leads Ryu and Thompson on the official money list with almost US$2 million from 18 events.

Playing in the same group as her closest rivals did not faze her in the slightest on Thursday, nor did the huge galleries following the trio despite the chilly weather.

"It is true that this morning was really cold. At one point it did cross my mind that there may not be many spectators today. I was quite surprised when I reached the first hole and saw the size of the crowd," she said.

"I can't speak for the other players from abroad, but I've never felt that it's uncomfortable to have a larger crowd. I think the larger the cheering is more fun for me, so I had a really good time out there today."

American veteran Cristie Kerr, who just four days ago won the Lacoste Ladies Open de France for her first victory on the Ladies European Tour, scored 67 to lie one shot off the lead.

Spaniard Carlota Ciganda, who beat Alison Lee in a sudden death playoff to win the event last year, finished on even par with American Lee coming in at 2-over.