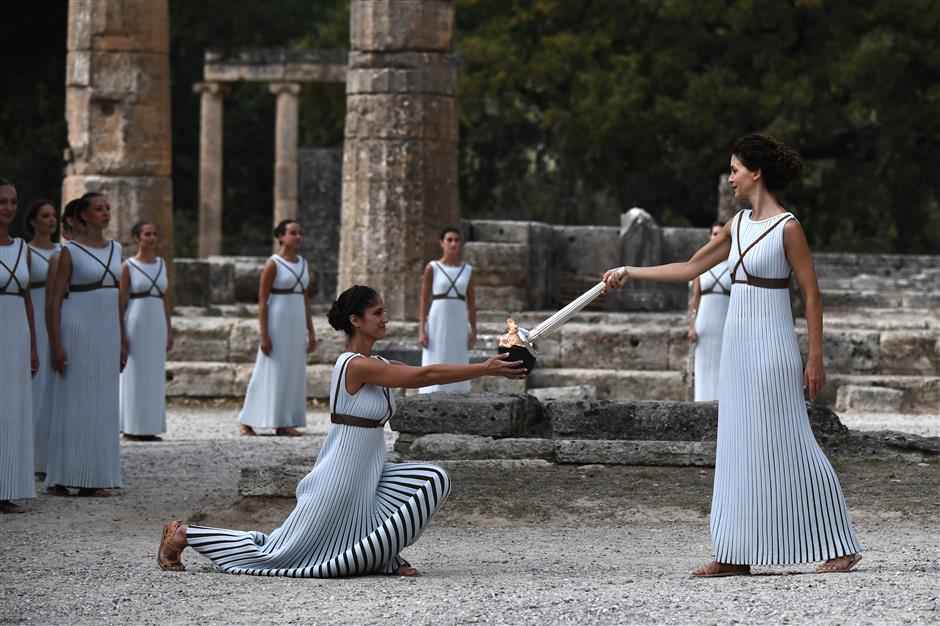 Actress Katerina Lechou (right), acting as the high priestess, passes the Olympic flame at the Temple of Hera in ancient Olympia, Greece, on October 23, 2017, during the dress rehearsal for the Olympic flame lighting ceremony for the Pyeongchang 2018 Winter Olympic Games.

Organizers of the 2018 Pyeongchang Winter Olympics have completed construction of all competition and non-competition venues, Games chief Lee Hee-beom said on Monday ahead of the start of the Olympic torch relay.

Pyeongchang had been rushing to finish work on a number of projects, including hotels and event venues, after falling behind in the first few years of preparations.

Lee said the completion of work was good news for organizers who can now focus on the delivery of what he said were going to be the biggest Winter Olympics in history.

Lee is in ancient Olympia for the lighting of the Olympic torch at the site of the ancient Olympics which will kick off the countdown to the Games.

The flame will arrive in Seoul on November 1 for the start of a three-month journey across the country.

"I can announce that as of today all competition and non-comp venues are complete," Lee told reporters a day before the torch lighting ceremony.

"We want to ensure they (athletes) have their time of their life with the best facilities possible. We are well on the road to achieving that.

"Infrastructure, including the high-speed rail (connecting Pyeongchang with Incheon airport) and highways, are already done. We will be the biggest Winter Games ever and we aim to be the most athlete-focused."

The February 9-25 Winter Games are the first to be staged in Asia outside Japan and the first of three consecutive Olympics on the continent, with the Tokyo 2020 Summer Games and the 2022 Beijing Winter Games to follow.

But organizers are struggling to sell tickets with only about a third of those available having been bought.

The run-up to the world's biggest winter sports event has also been overshadowed by an escalating crisis on the Korean peninsula.

North Korea is working to develop a nuclear-tipped missile capable of striking the United States mainland and has ignored all calls, even from its lone major ally China, to rein in its weapons programs which it conducts in defiance of United Nations Security Council resolutions.

"We know the world is watching the current geopolitical situation," Lee said. "We continue to work very closely with all relevant authorities of stakeholders to deliver safe and secure Games for everyone involved."