Simona Halep of Romania hits a return against Caroline Garcia of France during their WTA Finals Red Group match in Singapore on October 23, 2017. The world No. 1 won 6-4, 6-2.

Simona Halep made a winning start to her WTA Finals campaign with an impressive 6-4, 6-2 victory over Frenchwoman Caroline Garcia on Monday, the Romanian surging clear in the second set to subdue her in-form opponent at the Singapore Indoor Stadium.

The second Red Group match of the day was a completely one-sided affair when Denmark's Caroline Wozniacki blew away Elina Svitolina 6-2, 6-0 in less than an hour to gain revenge for two finals defeats against the Ukrainian this season.

Garcia was the last woman to qualify for the elite eight-woman event when the 24-year-old won back-to-back titles in China but her tournament debut ended in defeat when world No. 1 Halep halted her 11-match winning run in emphatic fashion.

There was little to choose between the aggressive baseliners in the first set but Halep stepped up a gear on the key points in the opener before hassling and harrying Garcia all over the court in the second to triumph in 88 minutes.

"I am really happy that I could win my first match as the No. 1 in the world, it takes the pressure off," Halep, who was beaten by Garcia in the China Open final this month, said in a courtside interview.

"I enjoy being in this position and hopefully I can play better in my second match than I did today."

While Halep was making her fourth straight appearance in Singapore, Garcia belied any signs of big stage nerves with a solid hold in the first game, displaying plenty of aggression and volleying well.

Halep, meanwhile, was slightly sluggish in the early exchanges before a superb passing shot on the run in the fourth game appeared to act as a trigger for the energetic play that eventually wore down her opponent.

The pair traded breaks midway through the opener before Garcia's serve completely fell apart as the set progressed and her second double fault of a calamitous ninth game gifted Halep a 5-4 lead.

Garcia refused to buckle completely, however, and Halep needed three set points to finally seal the opener with a booming backhand down the line that she greeted with a loud roar and two clenched fists. 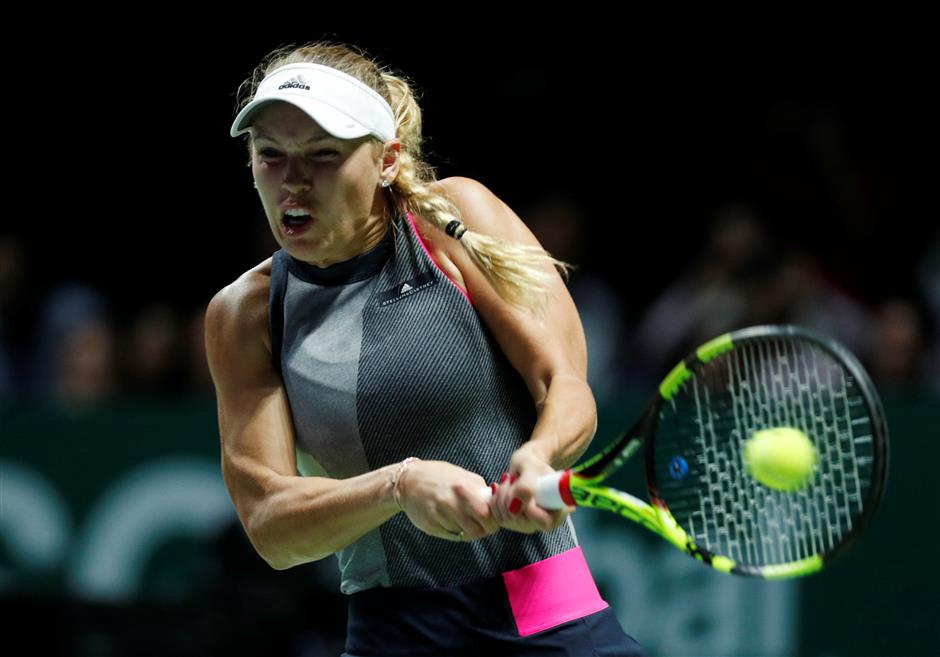 Denmark's Caroline Wozniacki in action during her Red Group match against Ukraine's Elina Svitolina at the WTA Finals in Singapore on October 23, 2017.

Halep was finding the corners at will and more sloppy serving from the Frenchwoman handed her opponent the first break of the next set in the third game, which the Romanian consolidated brilliantly after battling back from 0-40 down.

Another break of serve soon followed and although Garcia finally held in the seventh game, Halep would not be denied and sealed the contest on her first match point when the Frenchwoman sent a routine volley at the net into the tramlines.

"It was a great match, I played my best tennis and it's never easy against Caroline after she beat me in Beijing, but I did well and I love competing here in Singapore," Halep added.

Svitolina was also making her debut in Singapore after a stellar campaign in which she won five titles, but the world No. 4 was overwhelmed by Wozniacki, who won 10 games in a row to turn a close match into a rout.

Wozniacki had suffered heavy defeats by Svitolina in Dubai and Toronto this year, two of six finals she lost, but once her powerful serve had helped claim the opening set, the dispirited Ukrainian offered only token resistance in the second.