Aguero hailed as City legend after record goal No. 178 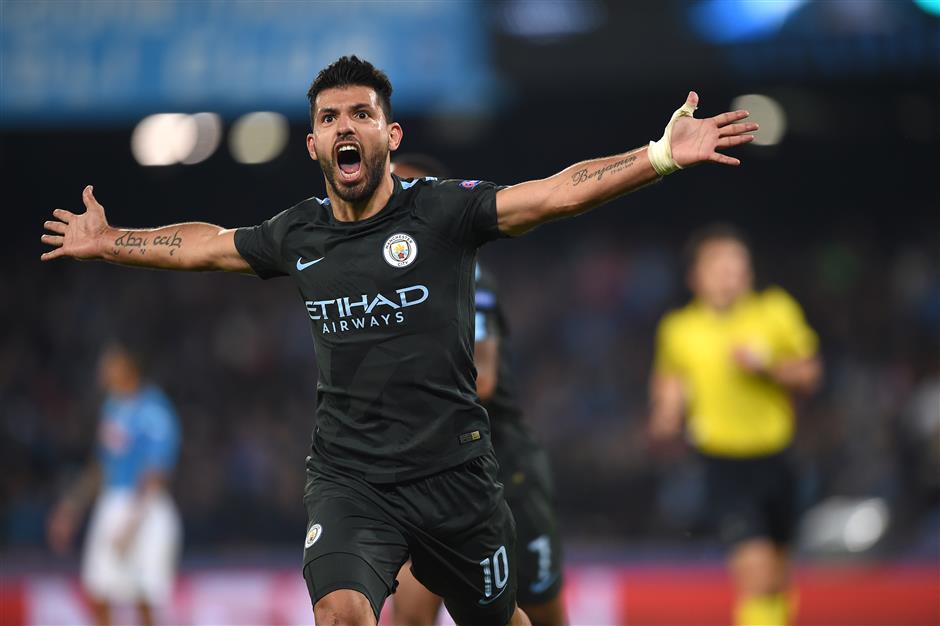 Sergio Aguero, fresh from becoming the top scorer in the 137-year history of Manchester City, said he would be giving away his historic match shirt as a special memento for his son Benjamin.

The popular Argentine was hailed as a "legend" by teammates and former City greats alike after scoring his 178th goal for the club — another crucial one — during its thrilling 4-2 win at Napoli in the UEFA Champions League on Wednesday.

Aguero's strike put City 3-2 ahead in the 69th minute of a remarkable game and he revealed that he would be taking home a prized souvenir for his 8-year-old son.

"He texted me, saying 'if you score, bring it (the shirt) to me'," the 29-year-old said after going past the 177-goal landmark of Eric Brook that had lasted for 78 years.

Vincent Kompany, City's captain, led the tributes to Aguero by calling him a "true legend" while the club's former England international Francis Lee tweeted that he was a "superstar".

Aguero's feat has been compiled relentlessly over the six years he has been at City ever since he struck twice in a memorable English Premier League debut in August 2011 against Swansea City.

It took him nine minutes to score his first goal and there have been many memorable and significant ones since, not least the 94th-minute winner in the last match of the 2012 season against Queens Park Rangers that brought City the EPL title.

Manager Pep Guardiola reckoned goal No. 178 in his 264th match for City was the only fitting way for the talismanic striker known universally as 'Kun' to break the record "because it was such an important goal to make it 3-2".

The Spaniard added: "It's amazing, another part of the history and legend for the club."

Although Raheem Sterling added a fourth in injury time, it was typical Aguero sharpness that broke Napoli and allowed Guardiola's side to become the first English team to win a European tie at the Italians' San Paolo stadium fortress.

After a pulsating game, Guardiola reckoned that beating Napoli, the free-scoring league leader in Serie A, twice in two weeks was an "incredible achievement".

"They are perhaps the best side I've faced in my career," he added.

"We tried to block their left flank, but they got there first and were too strong. They massacred us for 20 minutes and we didn't have the courage to play. I am glad with the way we reacted."

One down to a Lorenzo Insigne goal, City hit back through headed goals from its center backs Nicolas Otamendi and John Stones either side of halftime, before Jorginho checked its momentum from the penalty spot.

"I am so proud because I know the side we beat," added Guardiola, who has now overseen 22 unbeaten matches as City boss.

"I am in love with Napoli, with the way they make short passes and they didn't give us time to think in the opening 20 minutes."

Yet while City has booked its place in the last 16 with a maximum 12 points, this attractive Napoli side is now in grave danger of missing out on the knockout stages with just three points in third place.

Its manager Maurizio Sarri could take scant consolation in how "we caused problems for a very strong team, probably the best of all right now".